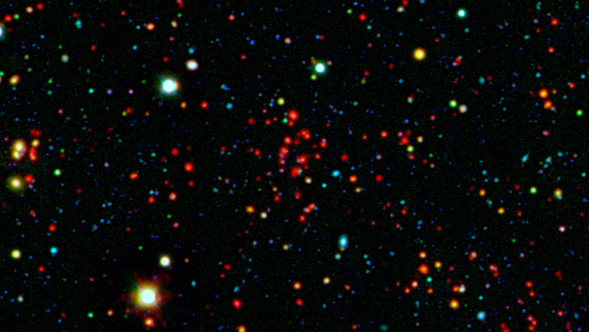 In the fable of the town and country mice, the country mouse visits his city-dwelling cousin to discover a world of opulence. In the early cosmos, billions of years ago, galaxies resided in the equivalent of urban or country environments. Those that dwelled in crowded areas called clusters also experienced a kind of opulence, with lots of cold gas, or fuel, for making stars.

Today, however, these galactic metropolises are ghost towns, populated by galaxies that can no longer form stars.  How did they get this way and when did the fall of galactic cities occur?

A new study from NASA's Spitzer Space Telescope finds evidence that these urban galaxies, or those that grew up in clusters, dramatically ceased their star-making ways about 9 billion years ago (our universe is 13.8 billion years old). These galactic metropolises either consumed or lost their fuel. Galaxies in the countryside, by contrast, are still actively forming stars.

"We know the cluster galaxies we see around us today are basically dead, but how did they get that way?" wondered Mark Brodwin of the University of Missouri-Kansas City, lead author of this paper, published in the Astrophysical Journal. "In this study, we addressed this question by observing the last major growth spurt of galaxy clusters, which happened billions of years ago."

Researchers studying distant galaxies get a peek into the past since the galaxies' light takes time, sometimes billions of years, to reach us. Brodwin and his colleagues used Spitzer to study 16 galaxy clusters that existed between the time our universe was 4.3 and 6 billion years old. Spitzer's infrared vision allows it see the dust warmed by new stars, revealing star-formation rates. NASA's Hubble Space Telescope and the W.M. Keck Observatory were used to measure the galaxies' distances from Earth.

This is one of the most comprehensive looks at distant galaxy clusters yet, revealing new surprises about their environments. Previous observations of relatively nearby clusters suggested that the urban, cluster galaxies produced all their stars early in the history of our universe in one big burst. This theory, called monolithic collapse, predicted that these tight-knit galaxies would have used all their fuel at once in an early, youthful frenzy. But the new study shows this not to be the case: The urban galaxies continued to make stars longer than expected, until suddenly production came to a halt around 9 billion years ago, or about 3 billion years later than previously thought.

A second study using observations from the Herschel Space Observatory, led by Stacey Alberts at the University of Massachusetts-Amherst and published in the Monthly Notices of the Royal Astronomical Society journal, finds a similar transition epoch. Alberts and colleagues observed 300 clusters over a longer period of time, dating back to when the universe was 4 to 10 billion years old. Herschel, which ran out of coolant in April of 2013 as expected, detected longer wavelengths of infrared light than Spitzer, which is still up and running. The two telescopes complement each other, allowing scientists to confirm results and probe different aspects of cosmic conundrums.

"We find that around 9 billion years ago, cluster galaxies were as active as their counterparts outside of clusters; however, their rate of star formation decreases dramatically between then and now, much more quickly than we see in isolated galaxies," said Alberts.

Why do the urban galaxies shut down their star formation sooner and more rapidly than the country bumpkins? Brodwin says this may have to do with galaxy mergers. The more crowded a galactic environment, as is the case in young, growing galaxy clusters, the more often two galaxies will collide and merge. Galaxy mergers induce bursts of fuel-consuming star formation, and also feed growing supermassive black holes, which then blast out radiation that heats up the gas and quickly shuts off the star formation.

"It's as if boom times for galaxies in clusters ended with a sudden widespread collapse," said Peter Eisenhardt of NASA's Jet Propulsion Laboratory, Pasadena, Calif., who led a previous study that identified the distant galaxy cluster sample used by Brodwin and Alberts.  "They go from vibrantly forming new stars to the quiescent state they've been in for the last half of the history of the universe, and the switch happens surprisingly fast." 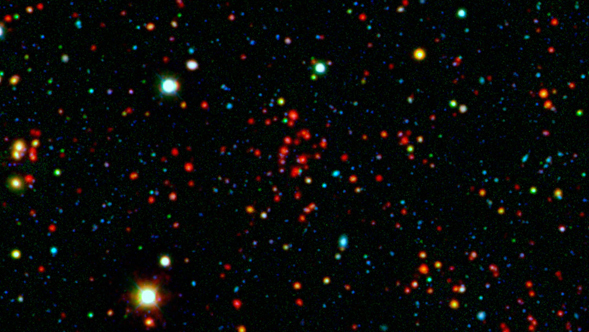 News Release | feature13-12
The Rise and Fall of Galactic Cities 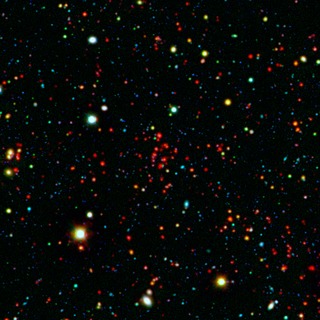