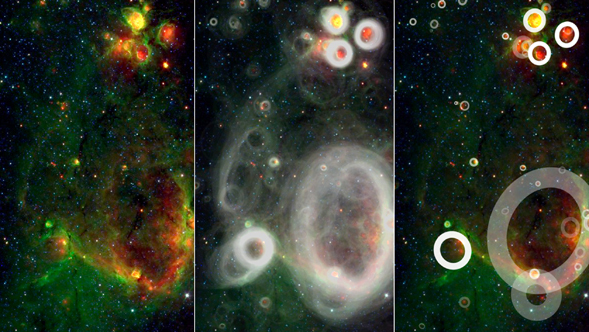 A team of volunteers has pored over observations from NASA's Spitzer Space Telescope and discovered more than 5,000 "bubbles" in the disk of our Milky Way galaxy. Young, hot stars blow these bubbles into surrounding gas and dust, indicating areas of brand new star formation.

Upwards of 35,000 "citizen scientists" sifted through the Spitzer infrared data as part of the online Milky Way Project to find these telltale bubbles. The volunteers have turned up 10 times as many bubbles as previous surveys so far.

"These findings make us suspect that the Milky Way is a much more active star-forming galaxy than previously thought," said Eli Bressert, an astrophysics doctoral student at the European Southern Observatory, based in Germany, and the University of Exeter, England, and co-author of a paper submitted to the Monthly Notices of the Royal Astronomical Society.

"The Milky Way's disk is like champagne with bubbles all over the place," he said.

Computer programs struggle at identifying the cosmic bubbles. But human eyes and minds do an excellent job of noticing the wispy arcs of partially broken rings and the circles-within-circles of overlapping bubbles. The Milky Way Project taps into the "wisdom of crowds" by requiring that at least five users flag a potential bubble before its inclusion in the new catalog. Volunteers mark any candidate bubbles in the infrared Spitzer images with a sophisticated drawing tool before proceeding to scour another image.

"The Milky Way Project is an attempt to take the vast and beautiful data from Spitzer and make extracting the information a fun, online, public endeavor," said Robert Simpson, a postdoctoral researcher in astronomy at Oxford University, England, principal investigator of the Milky Way Project and lead author of the paper.

The data come from the Spitzer Galactic Legacy Infrared Mid-Plane Survey Extraordinaire (GLIMPSE) and Multiband Imaging Photometer for Spitzer Galactic (MIPSGAL) surveys. These datasets cover a narrow, wide strip of the sky measuring 130 degrees wide and just two degrees tall. From a stargazer's perspective, a two-degree strip is about the width of your index finger held at arm's length, and your arms opened to the sky span about 130 degrees. The surveys peer through the Milky Way's disk and right into the galaxy's heart.

The bubbles tagged by the volunteers vary in size and shape, both with distance and due to local gas cloud variations. The results will help astronomers better identify star formation across the galaxy. One topic under investigation is triggered star formation, in which the bubble-blowing birth of massive stars compresses nearby gas that then collapses to create further fresh stars.

"The Milky Way Project has shown that nearly a third of the bubbles are part of 'hierarchies,' where smaller bubbles are found on or near the rims of larger bubbles," said Matthew Povich, a National Science Foundation Astronomy and Astrophysics Postdoctoral Fellow at Penn State, University Park, and co-author of the paper. "This suggests new generations of star formation are being spawned by the expanding bubbles."

Variations in the distribution pattern of the bubbles intriguingly hint at structure in the Milky Way. For example, a rise in the number of bubbles around a gap at one end of the survey could correlate with a spiral arm. Perhaps the biggest surprise is a drop-off in the bubble census on either side of the galactic center. "We would expect star formation to be peaking in the galactic center because that's where most of the dense gas is," said Bressert. "This project is bringing us way more questions than answers."

In addition, the Milky Way Project users have pinpointed many other phenomena, such as star clusters and dark nebulae, as well as gaseous "green knots" and "fuzzy red objects." Meanwhile, the work with the bubbles continues, with each drawing helping to refine and improve the catalog.

For those interested in counting bubbles and contributing to the Milky Way Project, visit the following link: http://www.milkywayproject.org . To learn of other citizen science-based efforts, check out the Zooniverse: https://www.zooniverse.org/. 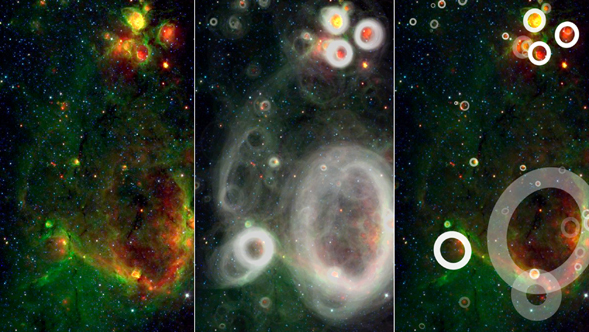 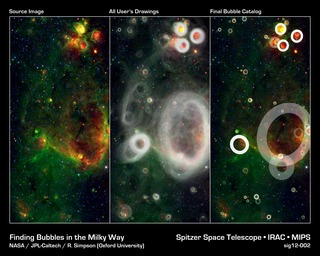 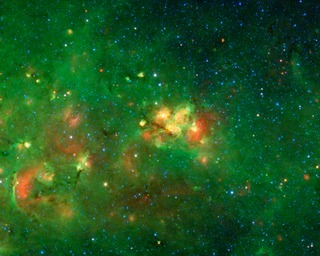