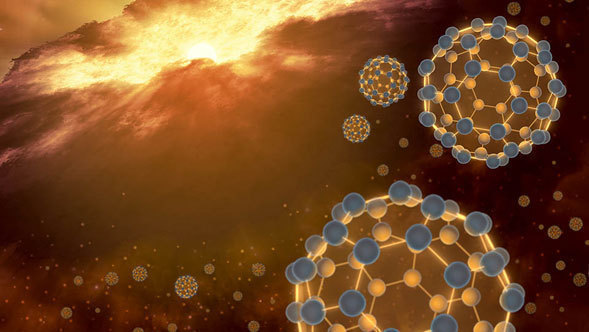 Fresh after finding buckyballs around an aging star, NASA's Spitzer Space Telescope has now detected these intriguing, miniature-soccer-ball-shaped molecules in interstellar space for the first time.

With these new results, the buckyball claims the record for the largest molecule ever discovered floating between the stars. The unique properties of buckyballs that have made these rounded particles such a hot area of research here on Earth also offer up some exciting possibilities for cosmic chemistry.

"Buckyballs are carbon molecules in the shape of a cage and they are very tough and hard to destroy," said Kris Sellgren, a professor of astronomy at The Ohio State University in Columbus, OH.  She noted that although life forms, let alone a single molecule of DNA, absolutely dwarf a buckyball, "single atoms or small molecules can become trapped and can survive inside the cage while the buckyball safely travels through the harsh conditions of space."

In this way, buckyballs can provide chemical "messages in a bottle," preserving records of gas present in stellar or interstellar environments. Buckyballs with extraterrestrial gases trapped inside them, for example, have previously been found in meteorites that have slammed into Earth. Spotting buckyballs in interstellar space also reveals that relatively big molecules can persist and maybe even form in the diffuse, unforgiving voids between the stars.

The particular variety of buckyball newly spied by Spitzer is made of 60 carbon atoms arranged in hexagons and pentagons like the panels of a soccer ball. Scientists created these spherical molecules in the lab 25 years ago and - noting their resemblance to geodesic domes - named them buckminsterfullerenes after the domes' inventor, Buckminster Fuller. The patterned orb of a geodesic dome will appear familiar to visitors to Disney World's Epcot Center in Florida, for instance, and halves of these domes are popular as jungle gyms on playgrounds.

Astronomers had long expected to find buckyballs in outer space, especially after the tiny structures turned up in meteorites and in more everyday materials such as soot. Sellgren and her team, while on the hunt for buckyballs in infrared data collected by Spitzer, looked at two nebulae. The first, NGC 2023, is located near the well-known Horsehead Nebula in the constellation of Orion, and the second, NGC 7023, known as the Iris Nebula, appears in the constellation Cepheus.

Hints of interstellar buckyballs had first come in 1994, when Foing and Ehrenfreund detected absorption lines they attributed to buckyballs missing an electron. Then, in 2004, Sellgren and her colleagues serendipitously detected two light signatures indicative of the faceted mini-globes. The researchers knew they had caught a buckyball for sure this time around when they saw a predicted third signature in infrared light from the nebulae.

A buckyball, built from scratch

Although these hefty spaceborne molecules have now been identified in two different places in space, their ultimate origin remains sketchy.

One scenario starts with the abundance of carbon atoms that typical stars like our Sun produce late in their lifetimes. As aging stars' atmospheres swell, carbon sloughs off into the surrounding region known as circumstellar space. Researchers believe the high concentration of carbon-rich gas there allows complex molecules such as buckyballs to form. Such circumstellar buckyballs have been detected with Spitzer. The molecules cooked up around the dying star then waft away after its death, mingling with other gases and molecules between the stars.

Just how long buckyballs and other carbonaceous molecules can survive in rough interstellar conditions is a bit of a mystery. Shock waves from energetic particles streaming off stars, called stellar winds, supernovae blasts, and far-flung ejections of mass by newborn stars might break big molecules apart. Buckyballs are hardy, but if shattered, they would need to be somehow remade or reintroduced to interstellar space in order to explain their existence in such rugged climes.

Another proposed route for constructing buckyballs in space is to bombard carbon-rich dust grains with ultraviolet light from a star. Earthbound experiments have demonstrated that this can cause grains to shed carbon-containing molecules, including pure-carbon buckyballs. The nebulae Sellgren and colleagues studied - plentiful in ultraviolet starlight and carbon-rich dust - fit the bill in this manner as potential buckyball factories.

Not all of these generated buckyballs have to end up battered and drifting through the cosmos, however. Some could join the dust, gas and other materials in the so-called circumstellar disks that fan out from young stars and eventually give rise to solar systems.

"If you have all these buckyballs floating around, it's possible they are getting incorporated into the circumstellar disk, and from there into planetary formation," Sellgren said.  She and her team found buckyballs within a mere comet's throw from newly forming solar systems in the two nebulae.

Carbon is the key building block for life as we know it; the possibility exists that some of the very carbon in ours or even extraterrestrials' bodies might well have been balled up once as a buckyball crafted in space.

"Now that there are buckyballs confirmed in the interstellar medium and in circumstellar space, it's likely that chemists will get more interested in the astrobiological implications of these fascinating molecules," Sellgren said.

Sellgren and her colleagues detail the new results in a paper published in the October 10 issue of The Astrophysical Journal Letters. 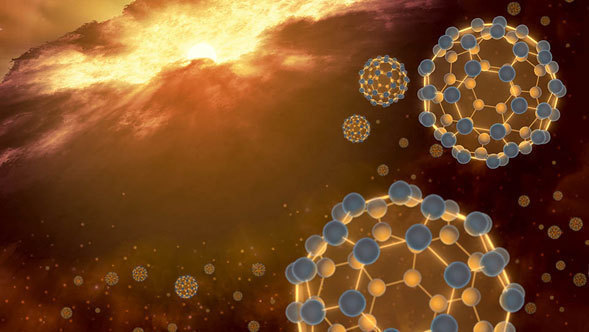 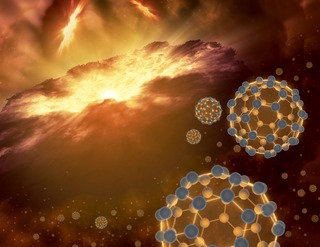