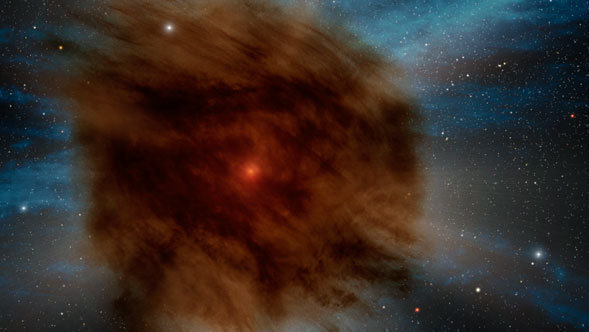 COLUMBUS, Ohio -- A giant star in a faraway galaxy recently ended its life with a dust-shrouded whimper instead of the more typical bang.

Ohio State University researchers suspect that this odd event -- the first one of its kind ever viewed by astronomers – was more common early in the universe.

It also hints at what we would see if the brightest star system in our galaxy became a supernova.

In a paper published online in the Astrophysical Journal, Christopher Kochanek, a professor of astronomy at Ohio State, and his colleagues describe how the supernova appeared in late August 2007, as part of the Spitzer Space Telescope Deep Wide Field Survey.

The astronomers were searching the survey data for active galactic nuclei (AGN), super-massive black holes at the centers of galaxies. AGN radiate enormous amounts of heat as material is sucked into the black hole. In particular, the astronomers were searching for hot spots that varied in temperature, since these could provide evidence of changes in how the material was falling into the black hole.

But one very hot spot, which appeared in a galaxy some 3 billion  light years from Earth, didn’t match the typical heat signal of an AGN. The visible spectrum of light emanating from the galaxy didn’t show the presence of an AGN, either – the researchers confirmed that fact using the 10-meter Keck Telescope in Hawaii.

Enormous heat flared from the object for a little over six months, then faded away in early March 2008 – another clue that the object was a supernova.

“Over six months, it released more energy that our sun could produce in its entire lifetime,” Kozlowski said.

The astronomers knew that if the source were a supernova, the extreme amount of energy it emitted would qualify it as a big one, or a “hypernova.” The temperature of the object was around 1,000 Kelvin (about 700 degrees Celsius) -- only a little hotter than the surface of the planet Venus. They wondered -- what could absorb that much light energy and dissipate it as heat?

The answer: dust, and a lot of it.

Using what they learned from the Spitzer survey, the astronomers worked backward to determine what kind of star could have spawned the supernova, and how the dust was able to partly muffle the explosion. They calculated that the star was probably a giant, at least 50 times more massive than our sun. Such massive stars typically belch clouds of dust as they near the end of their existence.

This particular star must have had at least two such ejections, they determined – one about 300 years before the supernova, and one only about four years before it. The dust and gas from both ejections remained around the star, each in a slowly expanding shell. The inner shell – the one from four years ago – would be very close to the star, while the outer shell from 300 years ago would be much farther away.

“We think the outer shell must be nearly opaque, so it absorbed any light energy that made it through the inner shell and converted it to heat,” said Kochanek, who is also the Ohio Eminent Scholar in Observational Cosmology.

That’s why the supernova showed up on the Spitzer survey as a hot dust cloud.

Krzysztof Stanek, professor of astronomy at Ohio State, said that stars probably choked on their own dust much more often in the distant past.

“These events are much more likely to happen in a small, low metallicity galaxy,” he said -- meaning a young galaxy that hadn’t been around long enough for its stars to fuse hydrogen and helium into the more complex chemicals that astronomers refer to as “metals.”

Still, Kozlowski added that more such supernovae will likely be found by NASA’s Wide-field Infrared Explorer (WISE), which was launched in December 2009. “I would expect WISE to see 100 of these events in two years, now that we know what to look for,” he said.

Because of the alignment of the galaxy with Earth and our sun, astronomers were not able to see what the event looked like to the naked eye while it was happening. But Kochanek believes that we might see the star brighten a decade or so from now. That’s how long it will take for the shockwave from the exploding star to reach the inner dust shell and slam it into the outer shell. Then we’ll have something to see here on Earth.

We do have at least one chance to see a similar light show closer to home, though.

“If Eta Carinae went supernova right now, this is what it would probably look like,” Kochanek said, referring to the brightest star system in our Milky Way Galaxy.

The two stars that make up Eta Carinae are 7,500 light years away, and they host a distinctive dust shell dubbed the Homunculus Nebula, among other layers of dust. Astronomers believe that the nebula was created when the larger of the two stars underwent a massive eruption around 1840, and that future eruptions are likely.

This work was sponsored by NASA and the National Science Foundation. Kozlowski has since taken a new postdoctoral position at Warsaw University Observatory in Poland.

The original article can be found here: http://researchnews.osu.edu/archive/dustynova.htm 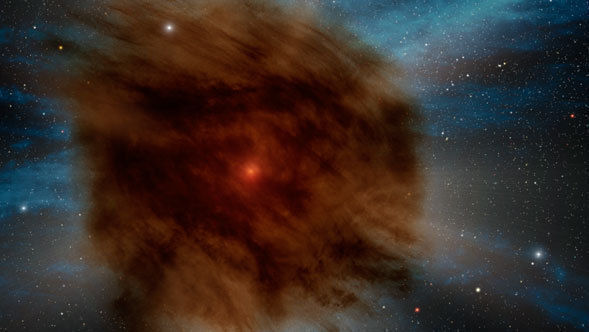 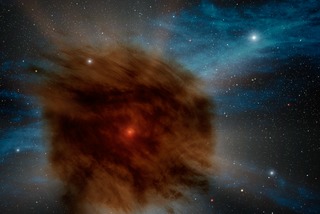