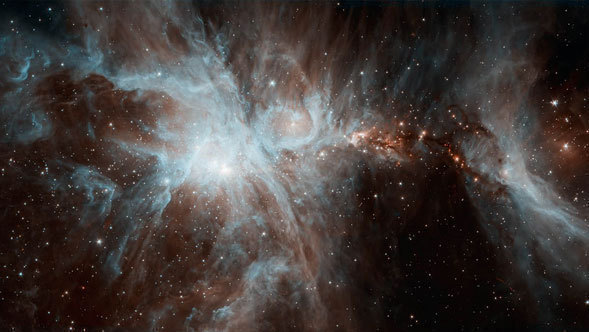 Astronomers have their eyes on a hot group of young stars, watching their every move like the paparazzi. A new infrared image from NASA's Spitzer Space Telescope shows the bustling star-making colony of the Orion nebula, situated in the hunter's sword of the famous constellation. Like Hollywood starlets, the cosmic orbs don't always shine their brightest, but vary over time. Spitzer is watching the stellar show, helping scientists learn more about why the stars change, and to what degree planet formation might play a role.

"This is an exploratory project. Nobody has done this before at a wavelength sensitive to the heat from dust circling around so many stars," said John Stauffer, the principal investigator of the research at NASA's Spitzer Science Center, located at the California Institute of Technology in Pasadena. "We are seeing a lot of variation, which may be a result of clumps or warped structures in the planet-forming disks."

The new image was taken after Spitzer ran out of its coolant in May 2009, beginning its extended "warm" mission. The coolant was needed to chill the instruments, but the two shortest-wavelength infrared channels still work normally at the new, warmer temperature of 30 Kelvin (minus 406 Fahrenheit). In this new phase of the mission, Spitzer is able to spend more time on projects that cover a lot of sky and require longer observation times.

One such project is the "Young Stellar Object Variability" program, in which Spitzer looks repeatedly at the same patch of the Orion nebula, monitoring the same set of about 1,500 variable stars over time. It has already taken about 80 pictures of the region over 40 days.  A second set of observations will be made in fall 2010. The region's twinkling stars are about one million years old - this might invoke thoughts of wrinkle cream to a movie star, but in the cosmos, it is quite young. Our middle-aged sun is 4.6 billion years old.

Young stars are fickle, with brightness levels that change more than those of adult, sun-like stars. They also spin around faster. One reason for the ups and downs in brightness is the existence of cold spots on their surfaces. Cold spots are the opposite of "age spots" - the younger the star, the more it has. The cold spots come and go as a star whips around, changing the amount of light that reaches our telescopes.

Stellar brightness can also change due to hot spots, which are caused by gas accreting onto a young star from the material out of which it formed.

"In the 1950s and 60s, astronomers knew that younger stars varied, and they postulated this had something to do with the birthing process," said Stauffer. "Later, with improved technology, we could see a lot more and learned a great deal about the stars' spots."

Spitzer is particularly suited to study yet another reason why the stars are changing. The telescope's infrared sight can see the warm, dusty disks orbiting around them. These disks are where planets may eventually clump together and form. When the disks are young, they can have asymmetries, possibly caused by forming planets or gravitational disturbances from formed planets. As the skewed disks circle around a star, they block varying amounts of starlight.

By gathering more and more data on these varying disks, Stauffer and his team hope to learn more about how planets develop -- not exactly tabloid fodder, but an ongoing drama of one large, stellar family. 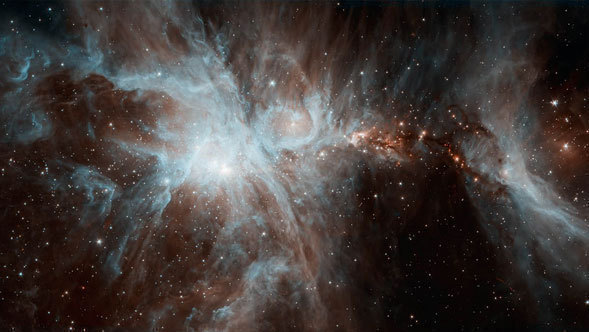