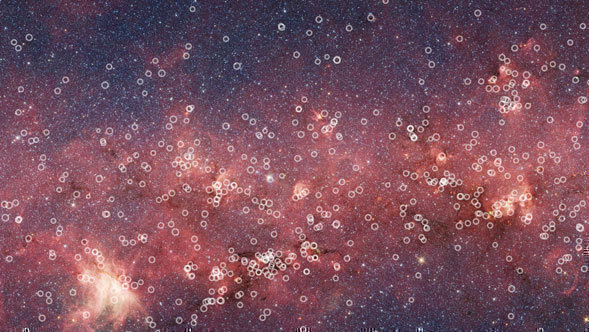 Astronomers have used NASA's Spitzer Space Telescope rather like a doctor's stethoscope to listen in on the "heartbeat" of star formation in our galaxy, a finding that will help trace the "life" of the Milky Way and other galaxies.

A key vital sign in people is our heart rate, or the number of beats the heart muscle makes in a given time. Galaxies, too, have a sort of heartbeat, which is their pace of forming new stars. This rate indicates a galaxy's activity level and gives clues about its "lifetime," or how long the celestial body might keep making new stars and planets before growing old and quiet.

Now astronomers have felt the pulse of star formation in the Milky Way more directly than ever before by using observations from Spitzer to count up baby stars in our galaxy. This information was then plugged into a computer simulation of galactic star formation, a novel technique which revealed that our home galaxy beats to a rhythm of creating about one star like our sun every year.

"Measuring the rate of star formation inside the Milky Way with this method is important not just for understanding our galaxy, but also has implications for measuring star formation rates for all galaxies," says Thomas Robitaille of the Harvard-Smithsonian Center for Astrophysics and lead author of a new study describing the results.

Previous measurements have suggested a slightly faster Milky Way star formation rate - as high as five times the mass of the Sun annually - but have relied on indirect methods. One technique required measuring the radio waves emanating from hydrogen gas clouds energized by the biggest, brightest and hottest stars. Scientists have made estimates of how many smaller, more common stars like our sun form per every one of these rare, yet easily detected behemoths.  Such an extrapolation, however, is somewhat imprecise.

Because we cannot see individual stars and young stellar objects (YSOs) in distant galaxies, and therefore have to indirectly take their pulse, it's important to gauge these other methods' accuracy. Accordingly, the new YSO-counting technique, which will only get sharper in the future, will help calibrate ways of measuring star formation rates in other galaxies.

Stars form from the gravitational collapse of gas that is scattered throughout space. As budding stars rotate and their cores heat up, leftover material gets spun into a surrounding dusty disk that can clump together in places to make planets. These YSOs, though extremely faint in the visible light we see, shine brightly in the infrared light that Spitzer sees.

To take the Milky Way's star formation vital sign, Robitaille first counted up thousands of these YSOs spotted by Spitzer's Infrared Array Camera for a survey called the Galactic Legacy Infrared Mid-Plane Survey Extraordinaire (GLIMPSE). This survey looked at a slice of sky about two degrees high by 130 degrees long, large enough to fit over 330 times the full moon. Other infrared surveys had previously captured fuzzy light from tens of thousands of stars, but GLIMPSE saw 100 million stars clearly and as many as 20,000 YSOs.

"We are seeing forming stars all the way through the galaxy for the first time," says paper co-author Barbara Whitney, a Senior Research Scientist at the Space Science Institute in Boulder, Colorado.

Whitney and Robitaille designed a realistic computer model of overall galactic star birth. By tweaking the model's star formation rate to correspond with the number of YSOs that Spitzer saw, the research duo came up with a directly measured, annual star formation rate of two-thirds to one and a half times the mass of the Sun.

This current star formation rate may seem low when considering that the galaxy contains 100 billion stars. To make all the stars we see now, the rate must have been far greater in the past, the researchers agree, and that the present figure is indeed reasonable for a mature galaxy like the Milky Way.  As our galaxy has calmed since a wild youth over its 11 billion year history, the Milky Way's star formation rate has slowed to a more sedate, middle-aged pace.

The galaxy has settled into near equilibrium in generating stars from some of the gas that older stars expel back into the cosmic environment. In this cyclical way, Whitney says that star formation rates are like "the heartbeat of a galaxy": if a galaxy is making stars very quickly, it may deplete the amount of gas available, stalling the genesis of new stars - not unlike someone having to take a rest after exercising and getting their heart rate up. Similarly, galaxies with low star formation rates may be winding down their youthful eons of star-producing activity.

The new Spitzer results were published in the February 10, 2010 issue of The Astrophysical Journal Letters. The observations as part of GLIMPSE were made before Spitzer began its "warm" mission in May 2009 upon exhausting its liquid coolant. 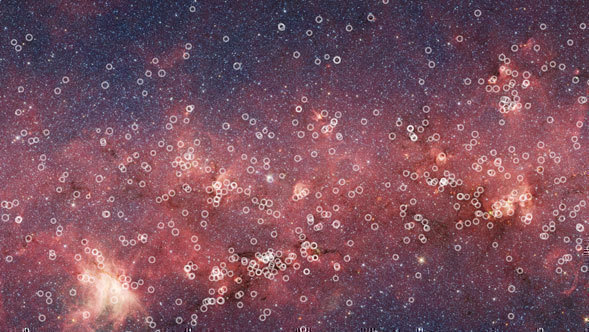 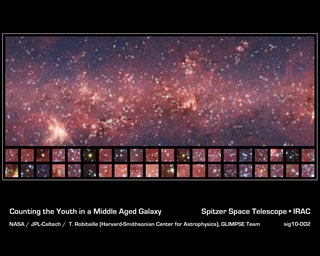 Observation | sig10-002
Counting the Youth in a Middle Aged Galaxy