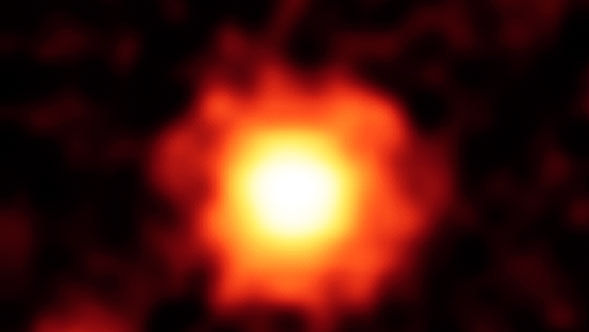 Before our planets found their way to the stable orbits they circle in today, they wiggled and jostled about like unsettled children. Now, NASA's Spitzer Space Telescope has found a young star with evidence for the same kind of orbital hyperactivity. Young planets circling the star are thought to be disturbing smaller comet-like bodies, causing them to collide and kick up a huge halo of dust.

The star, called HR 8799, was in the news last November 2008, for being one of the first of two stars with imaged planets. Ground-based telescopes at the W.M. Keck Observatory and the Gemini Observatory, both in Hawaii, took images of three planets orbiting in the far reaches of the system, all three being roughly 10 times the mass of Jupiter. Another imaged planet was also announced at the same time around the star Fomalhaut, as seen by NASA's Hubble Space Telescope. Both HR 8799 and Fomalhaut are younger and more massive than our sun.

Astronomers had previously used both Spitzer and Hubble to image a rotating disk of planetary debris around Fomalhaut, which is 25 light-years from Earth. HR 8799 is about five times farther away, so scientists weren't sure if Spitzer would be able to capture a picture of its disk. To their amazement and delight, Spitzer succeeded.

The Spitzer team, led by Kate Su of the University of Arizona, Tucson, says the giant cloud of fine dust around the disk is very unusual. They say this dust must be coming from collisions among small bodies similar to the comets or icy bodies that make up today's Kuiper Belt objects in our solar system.  The gravity of the three large planets is throwing the smaller bodies off course, causing them to migrate around and collide with each other. Astronomers think the three planets might have yet to reach their final stable orbits, so more violence could be in store.

"The system is very chaotic and collisions are spraying up a huge cloud of fine dust," said Su. "What's exciting is that we have a direct link between a planetary disk and imaged planets. We've been studying disks for a long time, but this star and Fomalhaut are the only two examples of systems where we can study the relationships between the locations of planets and the disks."

When our solar system was young, it went through similar planet migrations. Jupiter and Saturn moved around quite a bit, throwing comets around, sometimes into Earth. Some say the most extreme part of this phase, called the late heavy bombardment, explains how our planet got water. Wet, snowball-like comets are thought to have crashed into Earth, delivering life's favorite liquid.

The Spitzer results were published in the Nov. 1 issue of Astrophysical Journal. The observations were made before Spitzer began its "warm" mission and used up its liquid coolant. 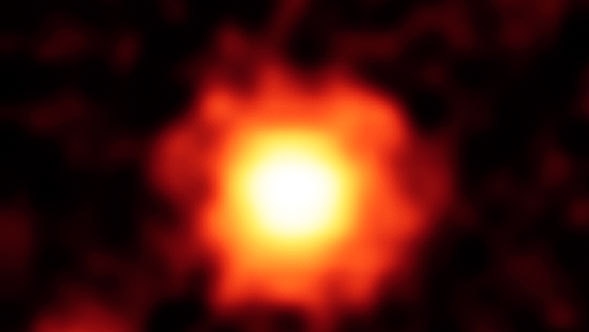 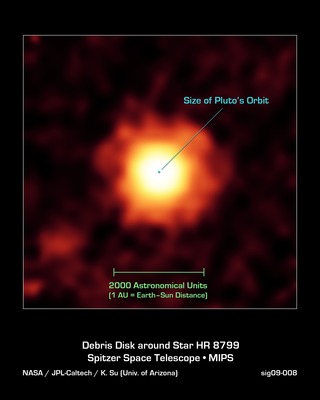