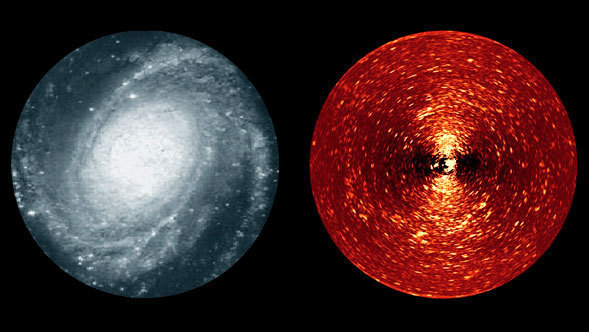 Using NASA's Spitzer Space Telescope, an international team of astronomers has discovered streams of young stars flowing from their natal cocoons in distant galaxies. These distant rivers of stars provide an answer to one of astronomy's most fundamental puzzles: how do young stars that form clustered together in dense clouds of dust and gas disperse to form the large, smooth distribution seen in the disks of spiral galaxies like the Milky Way?

"When you look at the disks of galaxies in the infrared they are remarkably smooth. All of the older stars are evenly distributed. But stars aren't born that way; they're born in clusters and associations like the Pleiades cluster, or the association of young stars in the Orion constellation of our own Milky Way galaxy. So the question is - why are the disks of galaxies so smooth?" said team leader David Block of the University of the Witwatersrand in South Africa.

Astronomers know that the clusters where stars form begin to disappear when their ages reach several hundred million years. A few mechanisms are thought to explain this: some clusters evaporate when random internal motions kick out stars one by one, and other clusters disperse as a result of collisions among the clouds where they were born. Zooming out to mechanisms operating on larger scales still, shearing motions caused by the galaxy's rotation around its center disperses the clusters of clusters of young stars.

"Our analysis now answers the grand puzzle. By finding a myriad of streams of young stars all over the disks of galaxies we studied, we see that the mechanism for pulling the clusters of young stars apart is shearing motions of the parent galaxy. These streams are the 'missing link' we needed to understand how the disks of galaxies evolve to look the way they do," said Block.

Crucial to this discovery was finding a way to image previously hidden young stellar streams in galaxies millions of light-years away. To do this the team used high-resolution infrared observations from the Spitzer.

Using infrared rather than visible light to look at the galaxies allowed the group to pick out stars at just the right age when the stars are just starting to spread out from their clusters.

"Spitzer observes in the infrared where 100-million-year-old populations of stars dominate the light," noted co-author Bruce Elmegreen, from IBM's Research Division in New York. "Younger regions shine more in the visible and ultraviolet parts of the spectrum, and older regions get too faint to see. So we can filter out all the stars we don't want by taking pictures with an infrared camera."

Infrared is also important because light in this part of the spectrum can penetrate the dense dust clouds surrounding the clusters where stars form.

"Dust blocks optical starlight very effectively," said Robert Gehrz of the University of Minnesota, "but infrared light with its longer wavelength goes right around the dust particles blocking our view. This allows the infrared light from young stars to be seen more clearly."

But even when the images are taken in the infrared, they are still dominated by the light from the smooth older disks of galaxies, not the faint tracks of young dispersing clusters. Special mathematical manipulations were needed to pick out the clusters, whose faint tracks can still be seen precisely because they are not smooth.

Team member Ivanio Puerari of the Instituto Nacional de Astrofisica, Optica y Electronica in Puebla, Mexico used a technique invented by mathematician Jean Baptiste Fourier in the early 1800's. The technique is effectively a spatial filter that picks out structure on the physical scale where star formation occurs. "The structures cannot be seen on the original Spitzer images with the human eye," noted Puerari.

"The combination of the Fourier filtering and infrared images highlighted regions of just the right size and the right age. To then unveil so many star streams in the disks of galaxies was unimaginable a year ago. This discovery continues to highlight the enormous potential of the Spitzer Space Telescope to make contributions none of us could have dreamed possible," commented Giovanni Fazio from the Harvard-Smithsonian Center for Astrophysics, project leader for the Spitzer Infrared Array Camera team used to take the pictures, and co-author of the discovery.

"Galileo, as both astronomer and mathematician, would have been proud. It is a wonderful interplay between the use of astronomical observations and mathematics and computers, exactly 400 years since Galileo used his telescope to examine our Milky Way galaxy in 1609," Fazio concluded.

Debra Elmegreen, Maria Mitchell Professor at Vassar College and President elect of the American Astronomical Society was also a member of the team. The results appeared in the March 20, 2009 issue of the Astrophysical Journal. 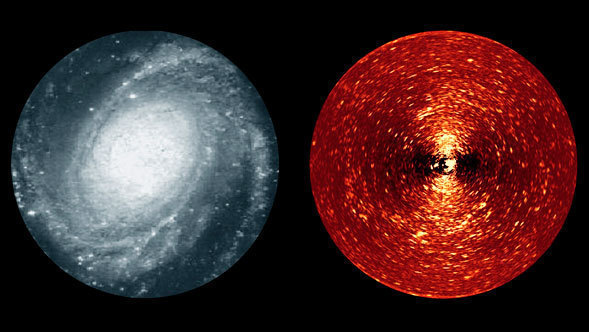 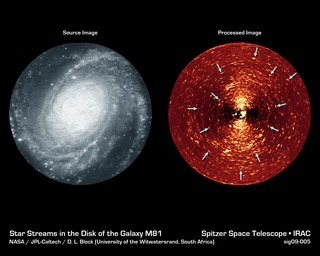 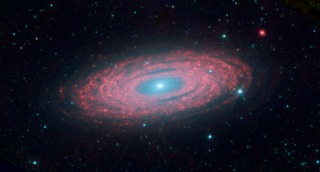