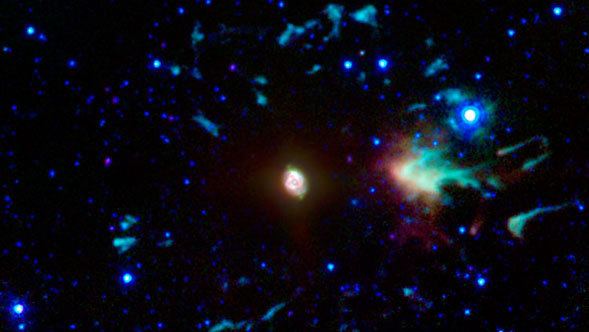 This discovery is significant because it adds to our knowledge of how stars form heavy elements - like oxygen, carbon, and iron - and then blow them out across the universe, making it possible for life to develop.

Astronomers have long been baffled by a strange phenomenon: Why have their telescopes never detected carbon-rich stars at the center of our galaxy even though they have found these stars in other places? Now, by using Spitzer's powerful infrared detectors, a research team has found the elusive carbon stars in the galactic center.

"The dust surrounding the stars emits very strongly at infrared wavelengths," says Pedro Garcia-Lario, a research team member who is on the faculty of the European Space Astronomy Center, the European Space Agency's center for space science. He co-authored a paper on this subject in the February 2009 issue of the journal Astronomy & Astrophysics.

"With the help of Spitzer spectra, we can easily determine whether the material returned by the stars to the interstellar medium is oxygen-rich or carbon-rich."

The team of scientists analyzed the light emitted from 40 planetary nebulae - blobs of dust and gas surrounding stars - using Spitzer's infrared spectrograph. They analyzed 26 nebulae toward the center of the Milky Way - a region called the "Galactic Bulge" - and 14 nebulae in other parts of the galaxy. The scientists found a large amount of crystalline silicates and polycyclic aromatic hydrocarbons, two substances that indicate the presence of oxygen and carbon.

This combination is unusual. In the Milky Way, dust that combines both oxygen and carbon is rare and is usually only found surrounding a binary system of stars. The research team, however, found that the presence of the carbon-oxygen dust in the Galactic Bulge seems to be suggestive of a recent change of chemistry experienced by the star.

The scientists hypothesize that as the central star of a planetary nebula ages and dies, its heavier elements do not make their way to the star's outer layers, as they do in other stars. Only in the last moments of the central star's life, when it expands and then violently expels almost all of its remaining outer gasses, does the carbon become detectable. That's when astronomers see it in the nebula surrounding the star.

"The carbon produced through these recurrent 'thermal pulses' is very inefficiently dredged up to the surface of the star, contrary to what is observed in low-metallicity, galactic disk stars," said Garcia-Lario. "It only becomes visible when the star is about to die."

This study supports a hypothesis about why the carbon in some stars does not make its way to the stars' surfaces. Scientists believe that small stars - those with masses up to one-and-a-half times the mass of our sun - that contain lots of metal do not bring carbon to their surfaces as they age. Stars in the Galactic Bulge tend to have more metals than other stars, so the Spitzer data support this commonly held hypothesis. Before the Spitzer study, this hypothesis had never been supported by observation.

This aging and expelling process is typical of all stars. As stars age and die, they burn progressively heavier and heavier elements, beginning with hydrogen and ending with iron. Towards the end of their lives, some stars become what are called "red giants." These dying stars swell so large that if one of them were placed in our solar system, where the sun is now, its outermost border would touch Earth's orbit. As these stars pulsate - losing mass in the process - and then contract, they spew out almost all of their heavier elements. These elements are the building blocks of all planets, including our own Earth (as well as of human beings and any other life forms that may exist in the universe). 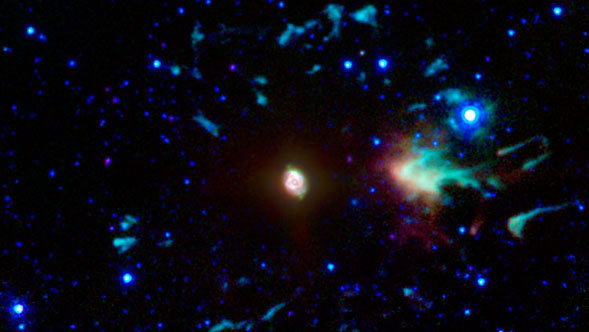 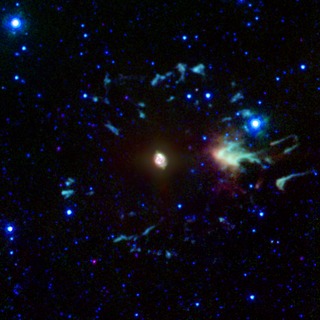