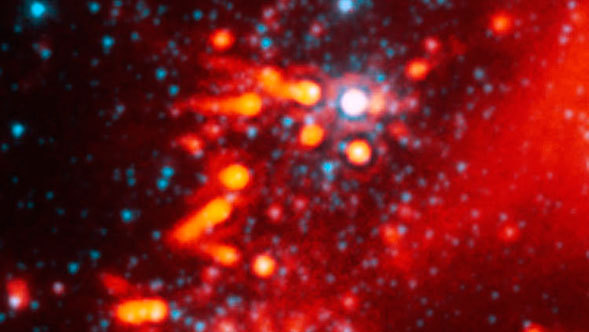 Some stars have it tough when it comes to raising planets. A new image from NASA's Spitzer Space Telescope shows one unlucky lot of stars, born into a dangerous neighborhood. The stars themselves are safe, but the material surrounding them -- the dusty bits of what might have been future planets -- can be seen blowing off into space.

The hazard in this particular nook of space is a group of behemoth stars. Radiation and winds from the massive stars are wiping smaller, sun-like stars clean of their planet-making material.

"We are seeing the effects that massive stars have on smaller stars that are trying to form planets," said Xavier Koenig, lead author of a paper about the discovery, recently published in the Astrophysical Journal Letters. "These stars may or may not go on to form small, inner planets like the Earth, but it's probable that outer planets like Uranus and Neptune would never come to be."

Many stars and planets do in fact grow up and survive the harsh environments of massive stars. Some astronomers say our middle-aged sun, though now sitting in a tranquil patch of space, once resided in a raucous, massive star-forming cloud. Over time, stars in these turbulent regions disperse and spread out, spending their later years in relative solitude.

The new Spitzer observations illustrate just how nasty these massive star-forming regions can be. It shows a portion of an active star-forming nebula called W5, located about 6,500 light-years away in the constellation Cassiopeia. Radiation and winds from a hub of four stars, each about 20 times as massive as our sun, are stripping the planet-forming material right off of three young, sun-like stars about one light-year away.

The sun-like stars are about two to three million years old -- the age when stars are thought to begin forming planets out of disks of gas and dust that swirl around them. The dust from these disks is visible in the Spitzer image as comet-like tails pointing away from the destructive massive stars.

Spitzer, an infrared observatory, can see this dust from the disks because the dust is warm and glows with infrared light. Since the telescope was launched more than five years ago, it has identified a handful of disks being blown from their stars.

"On astronomical timescales, these events are probably fairly short-lived," said Koenig. "It probably takes about one million years for the disks to completely disappear."

Koenig said that the dust being swiped away is from the outer portion of the stars' planet-forming disks -- around where Uranus and Neptune would orbit in our solar system and beyond. That means it's possible that any baby Earths forming in these faraway systems would grow up safely. Outer planets, on the other hand, might be nothing more than dust in the wind.

NASA's Jet Propulsion Laboratory, Pasadena, Calif., manages the Spitzer Space Telescope mission for NASA's Science Mission Directorate, Washington. Science operations are conducted at the Spitzer Science Center at the California Institute of Technology, also in Pasadena. Caltech manages JPL for NASA. The multiband imaging photometer for Spitzer, which made the new observations, was built by Ball Aerospace Corporation, Boulder, Colo., and the University of Arizona, Tucson. Its principal investigator is George Rieke of the University of Arizona. 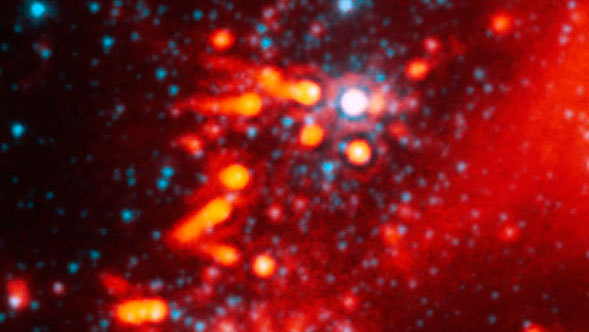 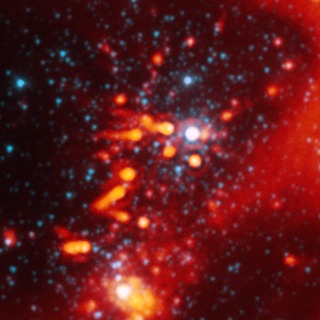