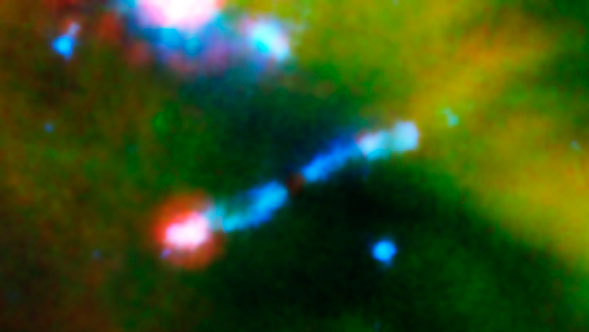 Water is being blasted to pieces by a young star's laser-like jets, according to new observations from NASA's Spitzer Space Telescope.

The discovery provides a better understanding of how water -- an essential ingredient for life as we know it -- is processed in emerging solar systems.

"This is a truly unique observation that will provide important information about the chemistry occurring in planet-forming regions, and may give us insights into the chemical reactions that made water and even life possible in our own solar system," said Achim Tappe, of the Harvard-Smithsonian Center for Astrophysics, Cambridge, Mass.

A young star forms out of a thick, rotating cloud of gas and dust. Like the two ends of a spinning top, powerful jets of gas emerge from the top and bottom of the dusty cloud. As the cloud shrinks more and more under its own gravity, its star eventually ignites and the remaining dust and gas flatten into a pancake-like disk, from which planets will later form. By the time the star ignites and stops accumulating material from its cloud, the jets will have died out.

Tappe and his colleagues used Spitzer's infrared eyes to cut through the dust surrounding a nascent star, called HH 211-mm, and get a better look at its jets. These particular jets are exceptionally young at 1,000 years old, and they are some of the most collimated, or focused, known. An instrument on Spitzer called a spectrometer analyzed light from one of the jets, revealing information about its molecules.

To the astronomers' surprise, Spitzer picked up the signature of rapidly spinning fragments of water molecules, called hydroxyl, or OH. In fact, the hydroxyl molecules have absorbed so much energy (through a process called excitation) that they are rotating around with energies equivalent to 28,000 Kelvin (27,700 degrees Celsius). This far exceeds normal expectations for gas streaming out of a stellar jet. Water, which is abbreviated H2O, is made up of one oxygen atom and two hydrogen; hydroxyl, or OH, contains one oxygen and one hydrogen atom.

The results reveal that the jet is ramming its head into a wall of material, vaporizing ice right off the dust grains it normally coats. The jet is hitting the material so fast and hard that a shock wave is also being produced.

Tappe said this same process of ice being vaporized off dust occurs in our own solar system, when the sun vaporizes ice in approaching comets. In addition, the water that now coats our world is thought to have come from icy comets that vaporized as they rained down on a young Earth.

Tappe is the lead author of a paper on this topic, which was published in a recent issue of the Astrophysical Journal. Co-authors on the paper include Charlie Lada, and August Muench, also of the Harvard-Smithsonian Center for Astrophysics; and J. H. Black, of the Chalmers University of Technology, in Onsala, Sweden. 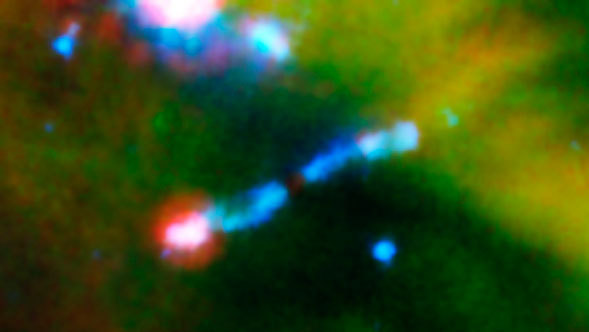 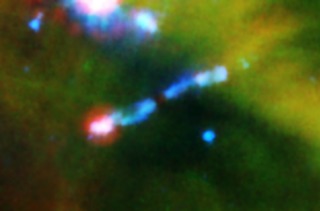