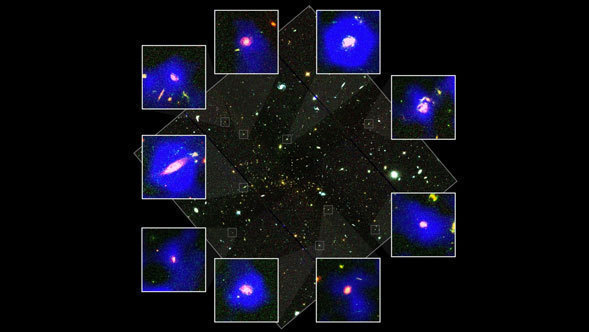 New evidence from NASA's Spitzer Space Telescope reveals that most galaxies undergo a huge stellar baby boom when they first enter a "cosmic city", or galaxy cluster. And the more distant the galaxy cluster, the greater the star formation rate.

"The infrared Spitzer observations let us peek at otherwise hidden, powerful star formation harbored in some of these cluster galaxies," says Dr. Amelie Saintonge, of the Institute for Theoretical Physics, University of Zurich, in Switzerland. "By looking at both nearby and distant galaxy clusters, we can look back in time and observe an increase in the fraction of galaxies undergoing these intense star-forming events."

Sanitonge and Dr. Kim-Vy Tran, also of the University of Zurich, studied a total of 1,300 galaxies in eight clusters spread across 7 billion light-years. The galaxies were observed by Spitzer's Multiband Imaging Photometer (MIPS), and archived for the astronomical community to use.

Moving to the City

Across the Universe, galaxies reside in communities big and small. Like big cities on Earth, there are densely populated galactic communities called galaxy clusters. Thousands of galaxies live within the limits of a cluster, which are connected by a web of dusty "highways" called filaments. Sprinkled along each filament are smaller galactic communities, or the celestial suburbs. Over time, astronomers suspect that all galactic suburbanites will be gravitationally pulled into the cluster, traveling there by way of the filaments.

Scientists believe that when a galactic suburbanite first falls into a cluster, the galaxy slams into the cluster's hot gas, producing shockwaves that trigger dusty gas clouds in the galaxy to collapse. Like raindrops, stars will form in these condensing cosmic clouds.

In their baby years, these stars are optically invisible - shrouded by the dust cloud that condensed to form them. Eventually, the stars will develop powerful winds, strong enough to blow away surrounding dust. Until then, only Spitzer's dust-piercing infrared eyes can glimpse the infant stars.

According to Saintonge, Spitzer is the first telescope able to produce sensitive images of galaxies located 7 billion light-years away in the mid-infrared, at 24 microns. At this wavelength, astronomers can see most of the dust-obscured star formation in a distant galaxy.

Previously the Infrared Space Observatory mission hinted that as much as 90 percent of star formation in cluster galaxies is hidden at optical wavelengths. However, Spitzer is the only telescope that allows astronomers to observe very distant clusters and confirm that the effect is increasing with distance - meaning, the farther away the cluster is, the more galaxies it has that are forming stars in very dusty environments.

Although scientists are currently unsure about the physical mechanisms that induce the exuberant star formation in these galaxies, they believe that the more distant galaxies form more stars because of the epoch they are located in. Light needs time to travel, so humans never see cosmic objects as they currently are, only as they were in the distant past. For example, the light from an object that is located 7 billion light-years away needs to travel for 7 billion years to reach our eyes.

Approximately 7 billion years ago, when the universe was only half the age it is now, galaxy clusters across the Universe were actively accreting galaxies. The gas clouds in these infalling galaxies were shocked and began condensing to form stars.

"There has been growing observational evidence that the increase in star formation with look back time is driven by cluster assembly and galaxy infall, the Spitzer observations not only confirm this scenario, but also show that the effect is even stronger than previously thought," says Saintonge. "By unveiling star formation events hidden at optical wavelengths, Spitzer finally lets us see more than the tip of this dusty iceberg." 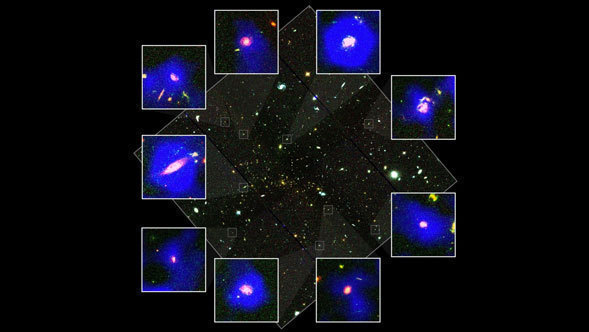 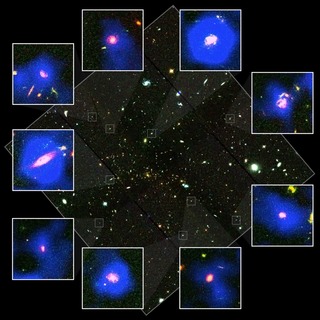