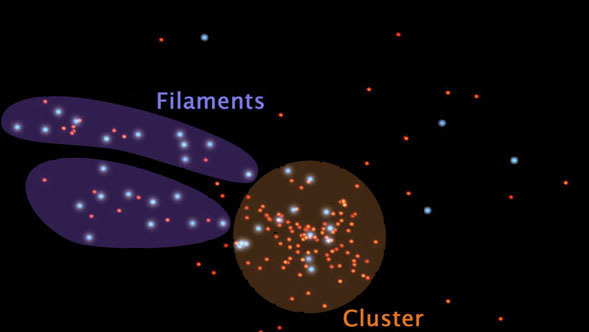 New observations from NASA's Spitzer Space Telescope suggest that galaxies prefer to raise stars in cosmic suburbia rather than in "big cities."

Galaxies across the universe reside in cosmic communities, big and small. Large, densely populated galactic communities are called galaxy clusters. Like big cities on Earth, galaxy clusters are scattered throughout the universe, connected by a web of dusty "highways" called filaments. While thousands of galaxies live within the limits of a cluster, smaller galactic communities are sprinkled along filaments, creating celestial suburbs. Over time, astronomers suspect that all galactic suburbanites will make their way to a cluster by way of filaments.

For the first time, Spitzer's supersensitive eyes have caught an infrared glimpse of several galaxies traveling along two filamentary roads into a galaxy cluster called Abell 1763.

"This is the first time we've ever seen a filament leading into a cluster with an infrared telescope," says Dario Fadda, of the Herschel Science Center, which is located at the California Institute of Technology in Pasadena, Calif.

According to Fadda, clusters and the filaments that connect them are among the largest structures in the cosmos. To see them, astronomers need instruments that can map large areas of sky and have the sensitivity to resolve individual galaxies.

Luckily, instruments aboard Spitzer can do both. Using the telescope's multiband imaging photometer, Fadda and his colleagues saw structures spanning 23 million light-years. They used the observatory's infrared array camera to collect a census of each galaxy's star formation and used a ground-based telescope at the Kitt Peak National Observatory near Tucson, Ariz. to determine which galaxies belonged to the cluster and surrounding filaments. Ultimately, Fadda found that galaxies in the filaments form stars at a higher rate than their cluster counterparts.

"The new Spitzer findings will provide valuable insights into how galaxies grow and change as they leave cosmic suburbia for the big cities," says Fadda.

He notes that future infrared missions will be able to follow in Spitzer's footsteps and study how filaments and clusters affect the growth of galaxies in greater detail. One such mission is the European Space Agency's Herschel Space Telescope, which has significant NASA involvement.

His paper on this topic has been accepted for publication in Astrophysical Journal Letters. Co-authors on the paper include Andrea Biviano of the INAF/Osservatorio Astronomico di Trieste, Italy; Florence Durret of Institut d'Astrophysique de Paris, France; and Francine Marleau and Lisa Storrie-Lombardi of the Spitzer Science Center, Pasadena, Calif. 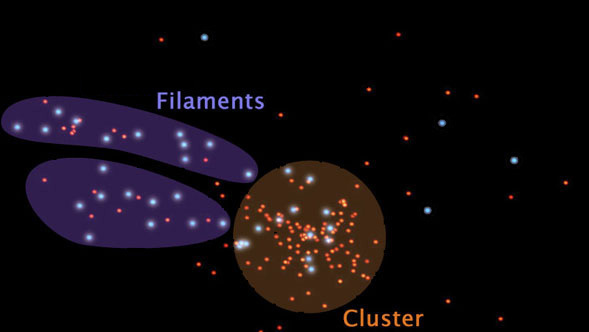 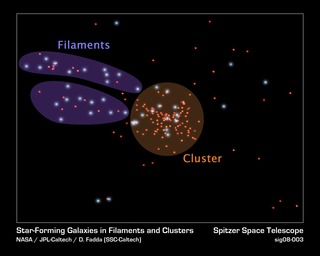 Chart | sig08-003
Celestial Cities and the Roads That Connect Them