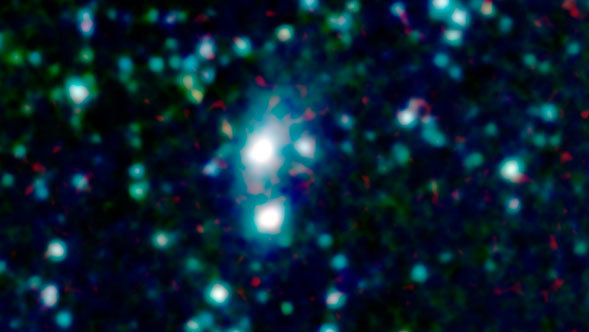 On Earth, thieves steal everything from diamonds to art to bags full of money. In space, gas -- fuel for making stars -- is a commodity worth the price of theft.

New observations from NASA's Spitzer Space Telescope reveal a distant, massive galaxy in the act of ripping off vast reservoirs of gas -- the equivalent of one billion suns -- from its smaller, neighbor galaxy. The stolen gas, which has become scorching hot during the heist, will likely cool down and get turned into new stars and planets.

"We may be viewing the larger galaxy in a rare, brief stage of its reincarnation from an old galaxy to a youthful one studded with brilliant stars," said Patrick Ogle of NASA's Spitzer Science Center at the California Institute of Technology, Pasadena, Calif. Ogle is the lead author of a new paper on the findings in the Oct. 20 issue of the Astrophysical Journal.

The robber galaxy, called 3C 326 North, is about the mass of our Milky Way galaxy, and its victim, 3C 326 South, is about half its mass. They are close enough to perturb each other gravitationally and might eventually collide. Such galaxy mergers are common in the universe: Gas and stars in two nearby galaxies become tangled until they join up into one seamless galaxy. The case of 3C 326 is the clearest example yet of large quantities of gas being heated and siphoned from one galaxy to another.

"This could be an important phase in galaxy mergers that we are just now witnessing," said Ogle.

Ogle and his colleagues initially set out to study a set of distant galaxies, called radio galaxies, about one billion light-years away. Radio galaxies are named after the radio-emitting jets that scream out of the black holes at their centers. Though these jets are powerful, their black holes are relatively sleepy and don't otherwise give off a lot of energy. When the astronomers scanned 72 galaxies using Spitzer's infrared vision, they noted a handful that were quite unusual.

The most extreme of the bunch, 3C 326 North, was soaking in an enormous amount of hot hydrogen gas, reaching temperatures up to 730 degrees Celsius (1,340 degrees Fahrenheit). This gas, called molecular hydrogen gas because it contains molecules of two hydrogen atoms joined together, is a building block of galaxies, stars and planets. On Earth, it is a potential alternative fuel for cars. Molecular hydrogen gas is invisible to optical telescopes, but when it's heated up it glows at infrared wavelengths that Spitzer can see.

"Hydrogen is by far the predominant element in the universe, yet in its molecular form it has been virtually undetectable until Spitzer launched," said co-author Robert Antonucci of the University of California, Santa Barbara.

Since 3C 326 North is not busy making new stars, it is unusual for it to have this much gas. When the researchers investigated the Spitzer pictures further, they noticed what appeared to be a tail of stars, called a tidal tail, connecting 3C 326 North to 3C 326 South. That was the smoking gun they needed to realize that the pair were interacting, and that 3C 326 North was lifting the gas right off its companion's back.

"The galaxy in question appears to be stripping a large quantity of molecular hydrogen from its neighbor and heating it up," said Ogle. "The supermassive black hole at the center of the galaxy is digesting a small fraction of the gas and ejecting it in enormous, relativistic jets millions of light-years long."

In addition, the hydrogen gas is hot enough to react with oxygen and form vast quantities of water. This water could potentially be incorporated into planets and comets once the gas has cooled enough to collapse and form new stars and planetary systems.

What will happen to the victim galaxy now that it is bereft of its gas? According to Ogle, the galaxy lost a lot of its fuel, and will no longer produce new stars. However, if the two galaxies do eventually merge, then what belongs to one will belong to the other!

Other authors of this paper include: Phil N. Appleton of Caltech; and David Whysong of the National Radio Astronomy Observatory, headquartered in Charlottesville, Va. 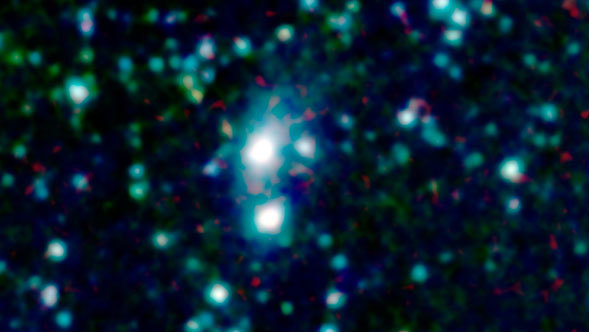 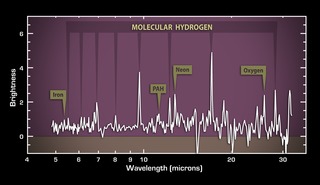 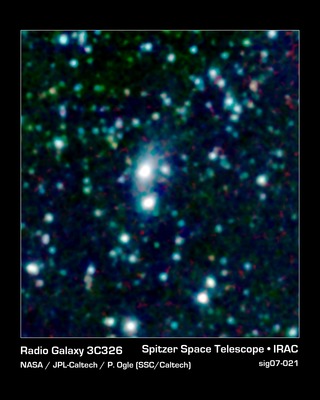