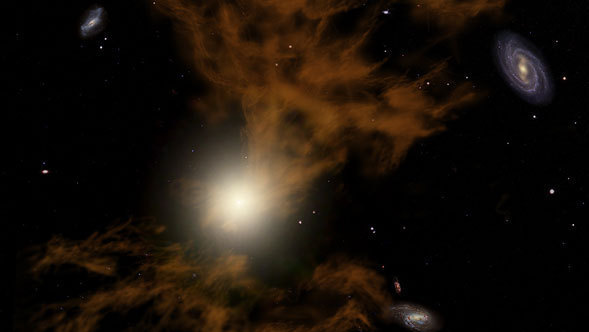 For the first time ever, astronomers have detected dust grains mingling with blazing hot gas at temperatures of 10 million degrees Kelvin (about 10 million degrees Celsius, or 17 million degrees Fahrenheit), in an area surrounding the elliptical-shaped galaxy called NGC 5044. Scientists hope this new finding will provide insight into how supermassive black holes reduce the stellar fertility in elliptical galaxies by heating gas.

"Generally we see X-ray emission from hot gas surrounding elliptical galaxies, extending far beyond their visible stars, but we do not fully understand the mechanisms that keep the gas from cooling. Our observation of plumes of dusty, hot gas shows that heating by massive black holes in the galactic cores may be a possible mechanism," said Dr. Pasquale Temi, of the NASA Ames Research Center and the SETI Institute in Calif. Temi is the principal investigator of the study slated to appear in the Astrophysical Journal.

"This is a very surprising discovery. Typically you wouldn't expect to see dust grains surviving in this type of heat -- this is like finding a snowflake in hell," says Dr. William Mathews, of the University at California at Santa Cruz. "We think that NGC 5044 is revealing a transient heating process that is common and astronomically important."

Galaxies in the universe come in many shapes and sizes. Spiral galaxies, like our own Milky Way, are usually active in star formation. By contrast, elliptical galaxies are stellar retirement communities because they are made up of older stars, and don't form many new stars. Many elliptical galaxies, like NGC 5044, are found at the centers of galaxy clusters that are filled with enormous amounts of hot gas. Why the gas doesn't cool and form new stars is a subject of intense debate among astronomers.

Both Temi and Mathews believe that many elliptical galaxies are being heated by the supermassive black holes at their centers through a process called "feedback heating." They suspect that this mechanism may also explain why the Spitzer Space Telescope detected so many dust grains in such a harsh cosmic environment.

Observations with NASA's Hubble Space Telescope have shown small, massive clouds of dusty gas near the cores of many elliptical galaxies. Astronomers think these clouds may play a crucial role in feedback heating. They suspect this material probably gravitated toward the galaxy's center after being ejected by nearby dying stars, as part of their normal life cycle.

When some of this dusty gas approaches the host galaxy's central supermassive black hole, a large amount of energy is released -- enough to heat nearby gas to extremely high temperatures, making it buoyant. Like smoke carrying ashes away from a fire, scientists believe that this buoyant gas floats away from the galaxy's center carrying some dust with it. As plumes of this dusty smoke fill the galaxy's surrounding area, gas around the galaxy is also heated. Temi's team was the first to see this cosmic smoke with Spitzer's super-sensitive infrared eyes.

"Whenever the central black hole takes another gulp of the dusty gas hovering around the galaxy's center, enough energy will be fed back to heat up more of the surrounding gas, and feedback heating will happen all over again, maintaining the temperature of the surrounding gas," says Mathews. He notes that both the heating and buoyant removal of gas from the galaxy's center reduces the likelihood of star formation.

Team members say that the most remarkable feature of this heating process is the huge disparity -- about a billion -- between the size of the black hole energy source and the surrounding atmosphere of hot gas. They note that if the black hole were the size of a human, the scale of the heated gas would extend to the Moon.

"Astronomers have long hypothesized about feedback heating in the hot cluster gas surrounding elliptical galaxies, but Spitzer has given us the first piece of observational evidence that this might actually be occurring in elliptical galaxies across the universe," says Temi.

In addition to Temi and Mathews, other team members include Dr. Fabrizio Brighenti of the University of Bologna. 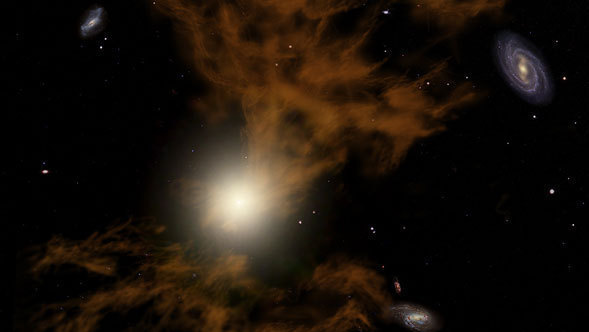 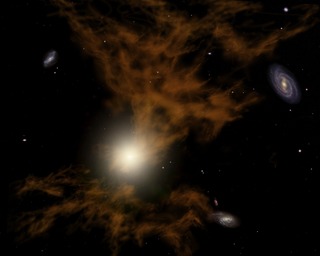