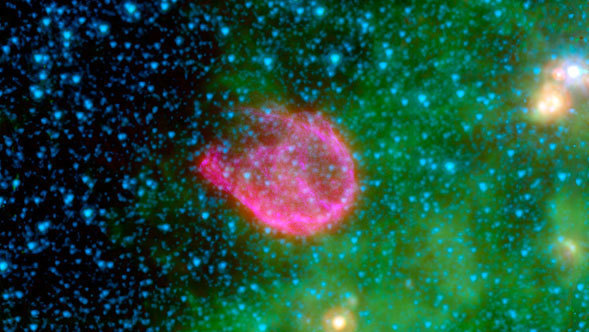 
Astronomers suspect the early Earth was a very harsh place. Temperatures were extreme, and the planet was constantly bombarded by cosmic debris. Many scientists believe that life's starting materials, or building blocks, must have been very resilient to have survived this tumultuous environment.

Now, NASA's Spitzer Space Telescope has learned, for the first time, that organic molecules believed to be among life's building blocks, called polycyclic aromatic hydrocarbons (PAHs), can survive another type of harsh setting, an explosion called a supernova. Supernovae are the violent deaths of the most massive stars. In death, these volatile objects blast tons of energetic waves into the cosmos, destroying much of the dust surrounding them.

The fact that PAHs can survive a supernova indicates that they are incredibly tough -- like cosmic cockroaches enduring a nuclear blast. Such durability might be further proof that these molecules are indeed among life's building blocks.

Dr. Achim Tappe of the Harvard-Smithsonian Center for Astrophysics, Cambridge, Mass., used Spitzer's Infrared Spectrograph (IRS) instrument to detect abundant amounts of PAHs along the ridge of supernova remnant N132D. The remnant is located 163,000 light-years away in a neighboring galaxy called, the Large Magellanic Cloud.

"The fact that we see PAHs surviving this explosion illustrates their resilience," says Tappe.

These intriguing molecules are comprised of carbon and hydrogen atoms, and have been spotted inside comets, around star-forming regions and planet-forming disks. Since all life on Earth is carbon-based, astronomers suspect that some of Earth's original carbon might have come from these molecules -- possibly from comets that smacked into the young planet.

Astronomers say there is some evidence that a massive star exploded near our solar system as it was just beginning to form almost 5 billion years ago. If so, the PAHs that survived that blast might have helped seed life on our planet.

Tappe's paper was published in the December 10, 2006, issue of Astrophysical Journal. 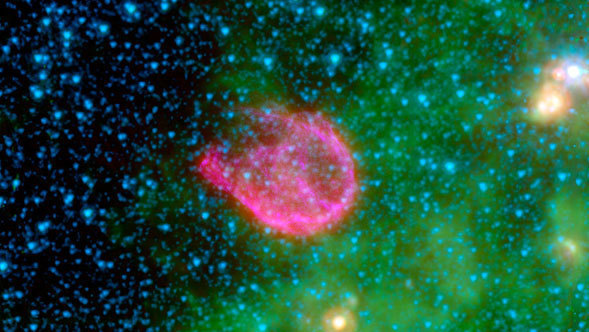 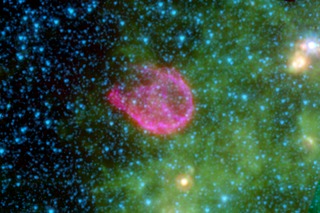