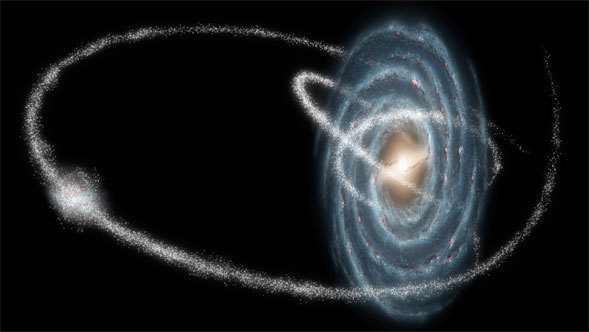 From a Caltech press release:

An astronomer at the Spitzer Science Center has discovered three giant stellar streams arcing high over the Milky Way. Remnants of cannibalized galaxies and star clusters, the streams are between 13,000 and 130,000 light-years distant from Earth and extend over much of the northern sky. The new results are being presented by Carl Grillmair at this week's meeting of the American Astronomical Society in Honolulu, Hawaii.

Grillmair, an associate research scientist at Caltech's Spitzer Science Center, found the streams by analyzing data from the Sloan Digital Sky Survey. Conducted over several years at the Apache Point Observatory in New Mexico, this survey has yielded measurements for some 70 million stars spread over one quarter of the whole sky.

By comparing the colors and brightnesses of the stars to those in surviving globular clusters, Grillmair was able to isolate stars into groups of similar age and distance. As he examined how these groups are distributed across the sky, the giant stellar streams quickly became apparent.

The third stream discovered by Grillmair is spread over a much larger region of the sky, and is most likely the scattered remains of a dwarf galaxy. Such dwarf galaxies may contain up to 100 million stars, along with sometimes substantial amounts of mysterious "dark matter." While the Milky Way galaxy currently hosts a family of 20 or so known dwarf galaxies, scientists who study the growth of galaxies in the early universe have long been puzzled as to why we don't see hundreds of them.

The new dwarf galaxy stream is particularly interesting in that Grillmair may also have found the feebly struggling remains of the original galaxy.

The stripping and cannibalization of dwarf galaxies and star clusters can be quite episodic, resulting in streams with strong concentrations of stars separated by often substantial gaps, much like the typical distribution of cars on a highway. However, one of the stellar concentrations is many times stronger than the others, and Grillmair believes this may be the remnant of the galaxy that gave rise to the stream. "We'll need to bring out the big telescopes to examine these stars in detail and find out whether they're still gravitationally bound to one another," he says.

The new streams are among the largest features in the sky. The streams extend to the limits of the Sloan survey area, and Grillmair considers it quite likely that they wrap completely around the galaxy.

Grillmair is now planning follow-up observations of stars in these streams. While this discovery strengthens the notion that there may be thousands of such streams and that the outer reaches of our galaxy look more like a "ball of yarn," the real payoff may be in using these streams as very sensitive probes of galactic gravity.

By measuring the velocities of stars in the streams, astronomers can both map their orbits and determine how matter is distributed in our galaxy. "It's a bit like looking at aerial TV coverage of kayakers on a river," says Grillmair. "The location of the river immediately tells you where the bottom of the valley and the major rock outcroppings are, and the speed of the kayakers gives you some idea of how high and how steep the surrounding mountains must be."

The new discoveries bring to nine the number of known stellar streams around the galaxy. These streams are helping astronomers study our galaxy's underlying structure more accurately than ever before.

Overall, the streams appear to be consistent with a picture in which our galaxy is dominated by huge amounts of smoothly distributed dark matter. On the other hand, Grillmair and others have already found intriguing departures that may be showing up cracks in this model.

"This is a very exciting time for galactic archeology, and finding more of these ancient streams will really help us to piece together the structure of our galaxy and how it evolved over time." 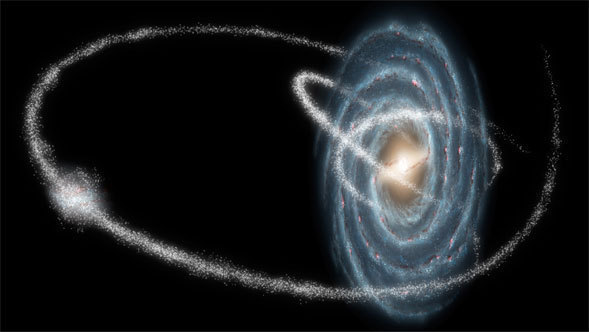 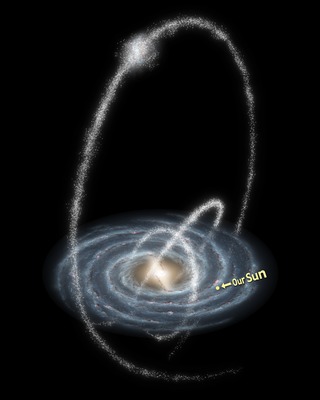