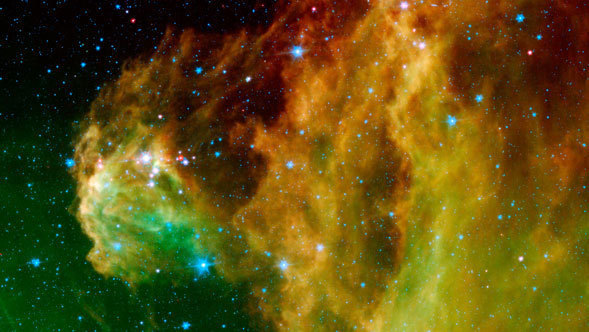 A new image from NASA's Spitzer Space Telescope shows infant stars "hatching" in the head of Orion, the famous hunter constellation visible from northern hemispheres during winter nights. Astronomers suspect that shockwaves from a 3-million-year-old explosion of a massive star may have initiated this newfound birth.

The region featured in the Spitzer image is called Barnard 30. It is located approximately 1,300 light-years away and sits on the right side of Orion's head, just north of the massive star Lambda Orionis.

"When we decided to study this region, it was barely known, despite the fact that its properties made it a nice target. Our aim was to carry out a comprehensive study of the region's different properties," said Dr. David Barrado y Navascu?s, of the Laboratorio de Astrof?sica Espacial y F?sica Fundamental in Madrid, Spain, who led the Spitzer observations.

"We now know, thanks to Spitzer, that there is a large population of low-mass stars and brown dwarfs [or failed stars]," he added.

A visibly dark and murky cosmic cloud is bright and clear in Spitzer's infrared image. Organic molecules called polycyclic aromatic hydrocarbons (PAHs) can be seen as wisps of green. These molecules are formed anytime carbon-based materials are burned incompletely. On Earth, they can be found in the sooty exhaust from automobile and airplane engines. They also coat the grills where charcoal-broiled meats are cooked.

Tints of orange-red seen in the cloud are dust particles warmed by the newly forming stars. The reddish-pink dots at the top of the cloud are very young stars embedded in a cocoon of cosmic gas and dust. Blue spots throughout the image are background Milky Way stars along this line of sight.

When Barrado y Navascu?s first saw this image of Barnard 30, he was so impressed that he decided to use it for the cover of his upcoming astronomy textbook.

"Once I saw the color image, it was clear it had to be the cover of the book. From the aesthetical point of view, [the image] is beautiful, it catches the eye. From the astronomical point of view, it has everything an astronomer wants -- high- and low-mass stars, brown dwarfs and a dark dust cloud. It is a gift from nature."

The inspiration for Barrado y Navascu?s' textbook came from his one-year-old astronomical reference blog, Cuaderno de Bitacora Estelar. The blog is one of the most widely read astronomy blogs in Spanish, with a large audience in Europe, South America, and United States. He decided to turn his blog into a textbook a few months ago when a Spanish editorial company asked him to.

"After hesitating and a lot of thinking about how to do it, we decided to go ahead," said Barrado y Navascu?s. "As far as we know, it is one of the first blogs to be converted into a book in Spanish. It is possibly the first academic blog to undergo such a conversion and, for sure, the first related to astronomy."

As for Barnard 30 and the other infant stars hatching in Orion's head, Barrado y Navascu?s says that this region "will no doubt become one of the cornerstones of stellar astrophysics, one of the most relevant young stellar clusters." 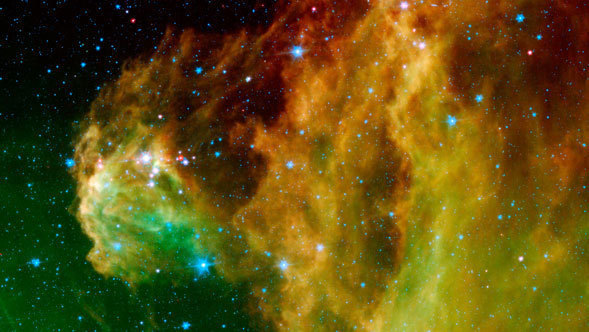