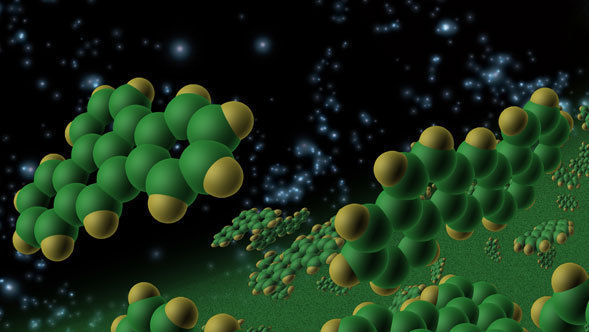 Astronomers may be one step closer to understanding how the ingredients of life are processed in space, thanks to NASA's Spitzer Space Telescope.

On Earth, the elements carbon and hydrogen dominate the chemistry of all life. Because molecules called polycyclic aromatic hydrocarbons, or PAHs, contain both of these elements and are abundant all over the universe, many astronomers suspect that they may be among life's building blocks. PAHs are also especially hardy molecules -- typically found in hot, chaotic regions of space -- leading some to believe that they could have survived the harsh environments of the planet's early days.

So, how do PAHs come to be? Astronomers may be one step closer to solving this mystery, now that a team of scientists led by Dr. Greg Sloan of Cornell University, Ithaca, N.Y., has detected many predecessors of PAHs in a relatively cool region of space.

"One of the greatest mysteries in astrobiology is the question of what happens to carbon before it is caught up in stars, planets, asteroids, and comets. This finding brings us one step closer to answering that question," says Sloan.

In the case of PAHs, "polycyclic" indicates that these molecules consist of multiple loops of carbon atoms, while "aromatic" refers to the kinds of strong chemical bonds that exist between the carbon atoms.

For years, astronomers believed that PAHs were the by-products of another molecule. They suspected that the predecessors of PAHs contained more delicate "aliphatic" carbon bonds. Because PAHs are typically found in regions polluted with intense ultraviolet radiation, scientists thought that harsh ultraviolet light might be responsible for breaking the fragile aliphatic bonds. Astronomers predicted that the stronger aromatic bonds of carbon and hydrogen atoms left over after the ultraviolet zapping became PAHs.

Now, Spitzer's infrared spectrograph instrument has finally confirmed this hypothesis by sensing many predecessors of PAHs -- molecules with relatively fragile aliphatic bonds -- in a cool and tranquil region of space. These molecules do not survive for very long in the hot, chaotic cosmic environments where PAHs are usually found. Sloan suspects that these molecules have yet to be processed by intense ultraviolet light and become PAHs.

Astronomers agree that almost everything on Earth once came from a star. A few minutes after the Big Bang, hydrogen and helium made up almost all of the elements in the universe. Other elements -- including carbon -- were formed later through nuclear fusion in the cores of stars, and ejected into space near the end of a star's life. Much of this material spread across space as dust. By studying the organics in the dust and how they are processed in space, scientists hope to understand how planets like Earth and the life on it formed.

Sloan's paper on this finding will be published in a forthcoming issue of the Astrophysical Journal. 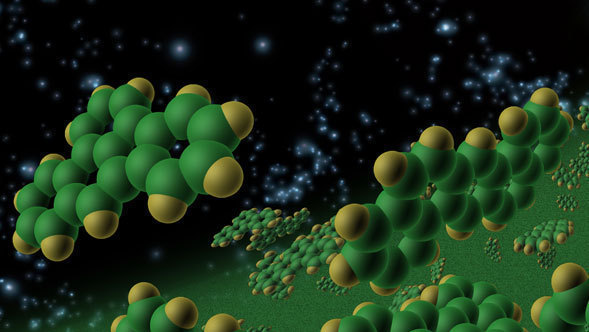 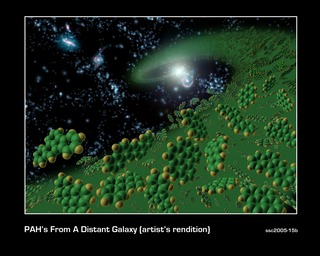