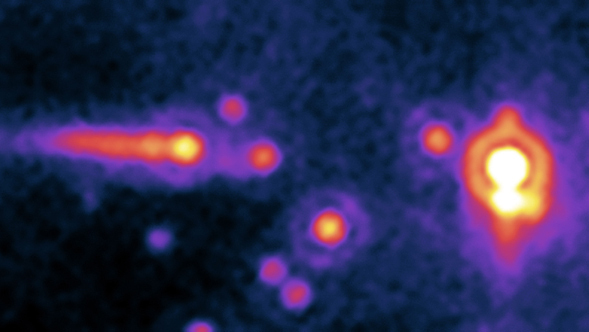 A team of scientists from the University of Arizona's Steward Observatory, Tucson, came to this conclusion after watching intense ultraviolet light and powerful winds from O-type stars rip away the potential planet-forming disks, or protoplanetary disks, around stars like our sun. At up to 100 times the mass of the sun, O stars are the most massive and energetic stars in the universe. They are at least a million times more powerful than the sun.

According to Dr. Zoltan Balog, lead author of the team's paper, the super-sensitive infrared eyes of Spitzer are ideal for capturing the "photoevaporation" of these planet-forming disks. In this process, immense output from the O star heats the disks that are surrounding nearby sun-like stars so much that gas and dust boil off (much like the evaporation of boiling water), and the disk can no longer hold together. Photon (or light) blasts from the O star then blow away the evaporated material, potentially stripping the sun-like stars of their ability to form planets.

"We can see that these systems take on a cometary structure as they are being blown away and destroyed," said Balog.

"No other telescope has ever captured the photoevaporation of a protoplanetary disk in this much detail," adds Dr. Kate Su, who is a co-author on Balog's paper.

According to Su, the photoevaporation process is very similar to the one that forms the tail of a comet as it swings by the inner solar system, only a lot more violent and on a far larger scale.

"Every time a particle of light from the O star hits a dust grain in the nearby protoplanetary disk, the light particle pushes the dust grain away from its host star," said Su. "This is very similar to how comet tails form."

"Unfortunately these sun-like stars just got a little too close to the fire," adds Dr. George Rieke. Rieke is also a co-author on the paper and the principal investigator for Spitzer's multiband imaging photometer instrument, which made the new observations.

Ultimately, the astronomers hope to determine whether all stars have planets, and if not, how a star loses the ability to form them. The Spitzer findings will help astronomers understand what regulates the process of planet formation.

Team members say that originally they were looking for "diskless stars" in their survey, stars that had ventured too close to an O star and no longer had any disk left. With so many O stars in the region, they didn't expect that a protoplanetary disk would survive for very long. However, they found something different -- stars that had recently blundered into the hostile neighborhood of an O star and were still in the process of losing their disks.

"To see protoplanetary disks in an area where no one expected to see one is very exciting," said Balog. "But to see a disk in the process of evaporating is even more thrilling."

Balog's paper was recently accepted for publication in Astrophysical Journal. He is currently is at the University of Arizona on leave from the Department of Optics and Quantum Electronics, University of Szeged, Hungary. 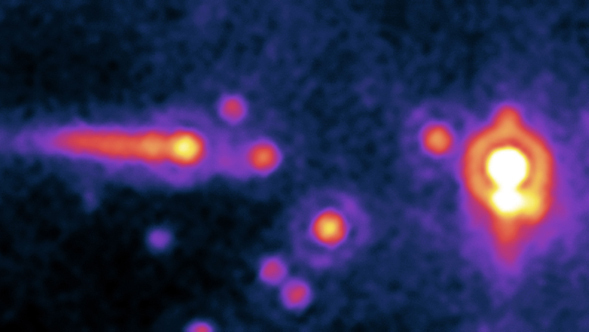