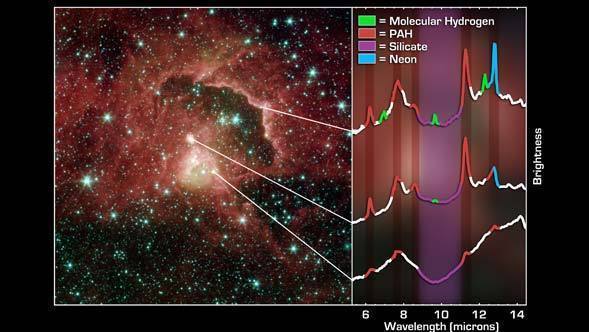 A star is born when a dense patch of gas and dust collapses inside a cosmic cloud. In the first million years of its life, a star is hidden from visible-light view by the cloud that created it. Eventually, as the star matures, its strong winds and radiation blow away surrounding material, and the star fully reveals itself to the universe.

In this image, the first stages of stellar life are represented by the greenish-yellow dot located toward the center. Chemicals detected by Spitzer's Infrared Spectrometer (IRS) instrument indicate that the star is still deeply embedded inside the cosmic cloud that collapsed to form it. Wisps of green seen in the image surrounding the star and its nearby environment illustrate the presence of hot ionized hydrogen gas.

Above and to the left of the central greenish-yellow dot, a large, bright pinkish spot reveals a more mature star on the verge of emerging from its natal cocoon. Although this star is still shrouded by birth material, astronomers use Spitzer to see the surrounding gas and dust that is being heated up by the star.

The region's oldest and fully exposed stars can be seen as bunches of blue specks located just left of the concave ridge. Energetic particles and ultraviolet photons from nearby star clusters etched this arc into the cloud by blowing away surrounding dust and gas. Infrared spectrometer observations of the ridge and the mature star (reddish-white dot) reveal the presence of carbon-rich molecules called polycyclic aromatic hydrocarbons (PAHs), which are found on barbecue grills and in automobile exhaust on Earth.

This stellar nursery was spotted in a cosmic cloud sitting 21,000 light-years away in the Cepheus constellation. The image was obtained within hours of Spitzer returning to normal science operations on August 31. On August 18, after an unexpected reboot of Spitzer's main onboard computer, the spacecraft autonomously followed pre-programmed procedures, switched to the backup electronics system, and entered safe mode. After detailed analysis of the spacecraft's telemetry data, the Spitzer recovery team found no hardware or software problem to explain the unplanned reboot. The Spitzer project office decided that the best option is to leave the observatory on its backup electronics system. The team believes the primary system is still in good condition and would function properly if needed. 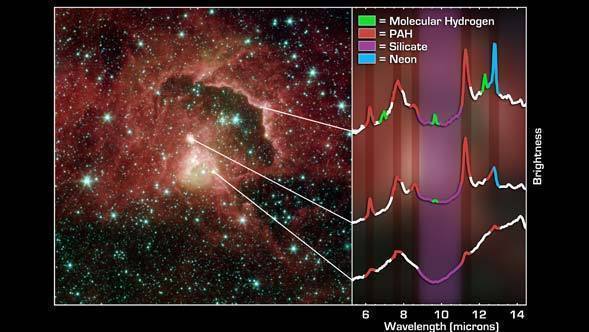 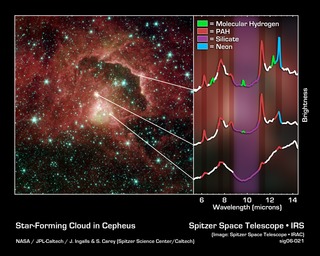