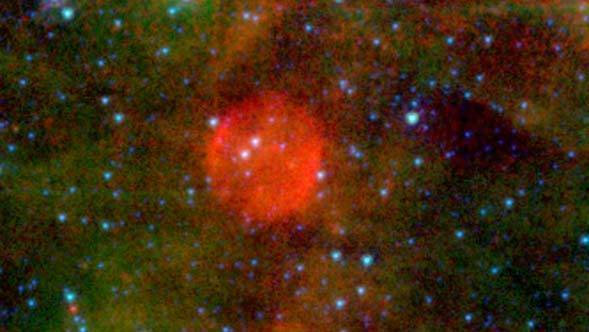 Big stars usually aren't shy about anything, not even death. At the end of their lives, they throw explosive tantrums, called supernovae, flinging abundant amounts of hot gas and radiation into space. Remnants of this cosmic fury can last for several thousand years and be easily detected by most telescopes used by professional astronomers.

But, not all stars like attention. Thirty thousand light-years away in the Cepheus constellation, astronomers think they've found a massive star whose death barely made a "peep." Remnants of this shy star's supernova would have gone completely unnoticed if the infrared eyes of NASA's Spitzer Space Telescope hadn't accidentally stumbled upon it.

"This source is really trying to avoid detection," said Dr. Patrick Morris of NASA's Herschel Science Center at the California Institute of Technology in Pasadena, Calif. He is the lead author of a paper on the discovery, which was published in the April 2006 Astrophysical Journal Letters.

So, what makes this lone star so unusual? Morris suspects that it sits away from the mobs of stars that occupy the main disk of our Milky Way galaxy. Our galaxy's disk is a crowded and dusty place, whereas the regions above and below are comparatively dust-free. It is this dust that allows exploding stars to be readily detected. Expelled material violently collides with surrounding dust, giving off bright light of various wavelengths. The putative supernova remnant discovered by Spitzer did not have enough dust around it to amplify its final death throes.

In fact, when Morris and his team first found this object, the thought that it could be a supernova remnant did not immediately cross their minds. The object was completely invisible to previous all-sky surveys taken by radio and X-ray telescopes. It did not even show up in visible-light images. Team members thought that the object was most likely a planetary nebula, or a star whose outer layers are gently puffed off in its last stages of life.

"There are various flavors of planetary nebulas; however, these objects normally have a bright star in the middle, a lot of dust, and a big range of chemistry. Our object shows none of this," said Morris.

For two years the team sifted through astronomical archives, literature, and additional Spitzer data in hopes of determining what the source could be. After months of comparing Spitzer's observations of the source to many examples from other object classes, Morris' team carefully ruled out the possibility that the source could be anything other than a supernova remnant.

The team was further inclined to believe this theory when they found traces of oxygen in the region with Spitzer's infrared spectrograph. Many known supernova remnants are surrounded by oxygen gas released from the cores of their aging stars.

Morris is currently planning to conduct deep radio observations of the object to confirm that it is indeed a supernova remnant. If his suspicions are correct, it will be the first supernova remnant ever to be discovered solely by its infrared properties. At 25 times the mass of our sun, the object will be among the three smallest and youngest remnants in the Milky Way. 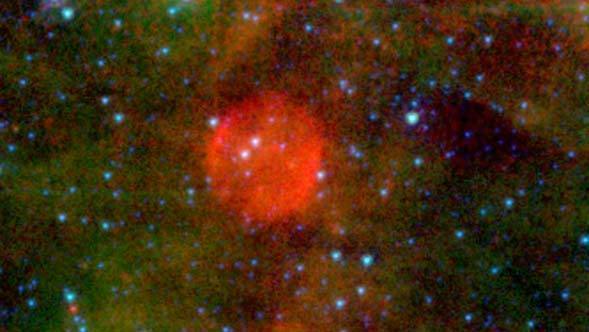