NASA
Jet Propulsion Laboratory
California Institute of Technology
The Infrared Background: Sometimes It's What You Don't See That Counts 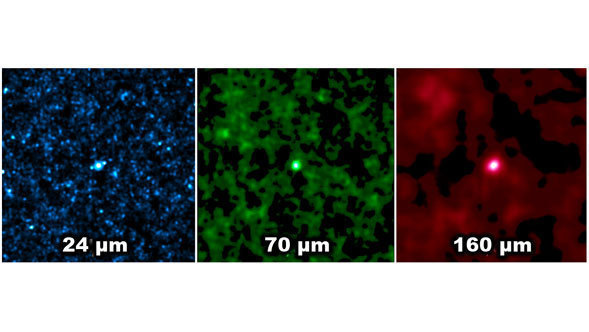 How could that possibly work? How can a telescope observe something beyond its limits of sensitivity? How can you even be sure there's something out there to observe, if, by the very definition, you can't see it? In fact, we are sure that there are stars and galaxies so far away from us that we can't see them. What we can see is a background glow, all around the sky, created by the combined light of all these distant, invisible sources.

Is there a universal background glow in visible light? Amazingly, the answer is "not any more." Until about ten years ago, there were indeed visible light photons detected by our telescopes that astronomers could not identify sources for. But that changed when the Hubble Space Telescope released its"Deep Field." After staring at a relatively"empty" part of the sky for over a week, Hubble found thousands of tiny, distant galaxies that had never been seen before. When these objects were finally resolved, it was a quick calculation to confirm that they had been responsible for the leftover visible light. In a real way, Hubble had seen as much of the universe as it was possible to see in visible light. Every photon could now be identified with a specific source.

But this isn't the case for the infrared universe; there is still a faint, long-wavelength infrared glow coming from the entire sky. What might be causing this infrared background? At this point, we're looking back to the time when the very first stars and galaxies began to form. This radiation is likely the heavily red-shifted remnant signal of young, giant stars bursting into existence, or super-heated gases falling into giant black holes at the cores of young galaxies. But some of the background is probably from nearer, less dramatic sources such as dim galaxies. What's up to astronomers now is to resolve as much of the background as they can, slowly whittling away the extra light. What's left over may, after the next generation of space telescopes comes along, give us a view of the first galaxies to ever exist.

Amazingly, a team of astronomers using NASA's Spitzer Space Telescope has recently been able to resolve about 80% of the far-infrared background by using a clever trick to see the unseeable. The idea is this: first, identify a population of distant galaxies that you can see at shorter infrared wavelengths. Then, set your telescope to observe these galaxies at longer wavelengths where the infrared background is detected. The "target" galaxies may no longer be visible, but you can measure how much infrared background is coming from that part of the sky. Next, make lots and lots of observations of these galaxies and add them all together. Even if you can't see the individual galaxies at the longer wavelength, maybe by adding the data from many galaxies together, you'll begin to see some sort of fluctuation signal produced by your combined target galaxies.

Dr. Herve Dole, from the Institut d'Astrophysique Spatiale in Orsay, France (Universite de Paris Sud 11 and Centre National de la Recherche Scientifique), the leader of this team, went as far as to say "the idea behind this technique is so simple, I'm amazed that a simple addition can lead a major discovery!"

Dole and his team undertook an ambitious program. First, they needed to find near- and far-infrared observations of several thousand galaxies. Luckily, the Multiband Imaging Photometer for Spitzer (MIPS) had just completed a deep survey of parts of the infrared sky, creating matching data sets at 24, 70, and 160 microns. The astronomer and his colleagues at the Institut d'Astrophysique Spatiale and the University of Arizona identified over 20,000 faint galaxies that were just barely visible at 24 microns. Then, they added the collected light from more and more galaxies together, hoping to coax out a faint signal at longer wavelengths. All in all, Dole's team combined infrared images of over 20,000 galaxies. And as more and more images were stacked up, Dole and his team did indeed see signals at 70 and 160 microns begin to emerge. In a real way, they found a way to observe galaxies that were too faint for Spitzer to see, at least in individual observations. The team also went as far as to conduct an opposite experiment: when Spitzer surveyed the sky where no galaxies were visible at 24 microns, no far infrared background showed up either.

The remaining 20% is now the big mystery. This light must come from objects even more distant, maybe even from the very first starlight that led the universe out of its dark age. At this point, that much is still beyond our grasp.

Still, few people realized just how powerful a tool for probing the very early universe Spitzer could be. As Dole observes, "Just 10 years after the discovery of the infrared background in the COBE data, we can now give more accurate measurements of it with Spitzer and, more importantly, describe what the galaxies responsible for this infrared background are. This illustrates the great role of the infrared in cosmology, and more importantly, why we need high quality data in the whole electromagnetic spectrum." 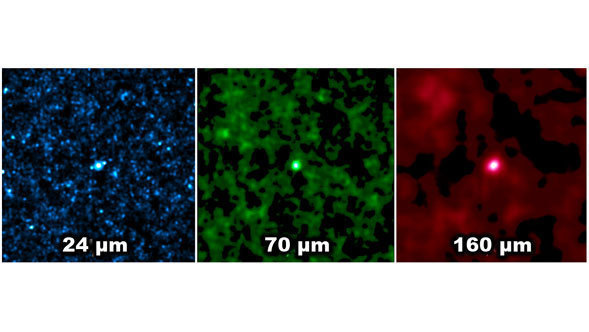 News Release | feature06-10
The Infrared Background: Sometimes It's What You Don't See That Counts