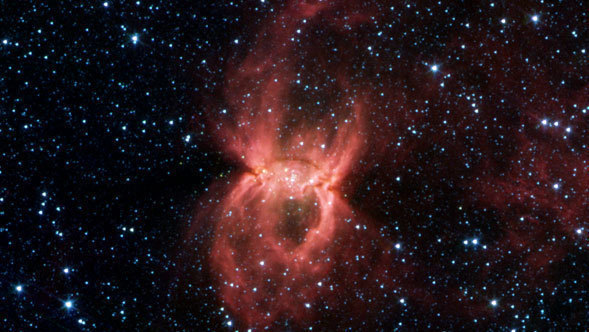 Unsuspecting prey be warned! Hiding in the darkest corner of the constellation Circinus is a gigantic black widow spider waiting for its next meal. For decades, this galactic creepy crawler has remained largely invisible, cunningly escaping visible-light detection. At last, it has finally been caught by NASA's Spitzer Space Telescope's dust-piercing, infrared eyes.

The spider is actually a star-forming cloud of gas and dust. In this spooky Halloween image, an hourglass-shaped insignia, typically found on the underbelly of a black widow spider, can be seen faintly in the visible-light image from Digital Sky Survey (DSS). As Spitzer's infrared image fades in, the veil of galactic dust shrouding the rest of the spider is lifted to reveal a poisonous widow.

In the Spitzer image, the two opposing bubbles that make up the black widow's body are being formed in opposite directions by the powerful outflows from massive groups of forming stars. The baby stars can be seen inside the widow's "stomach" where the two bubbles meet.

When individual stars form from molecular clouds of gas and dust they produce intense radiation and very strong particle winds. Both the radiation and the stellar winds blow the dust outward from the star creating a cavity or, bubble.

In the case of the Black Widow Nebula, astronomers suspect that a large cloud of gas and dust condensed to create multiple clusters of massive star formation. The combined winds from these large stars probably blew out bubbles into the direction of least resistance, forming a double-bubble. 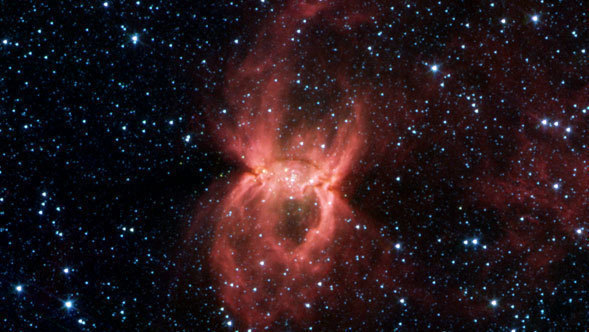 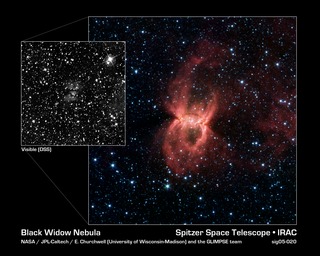 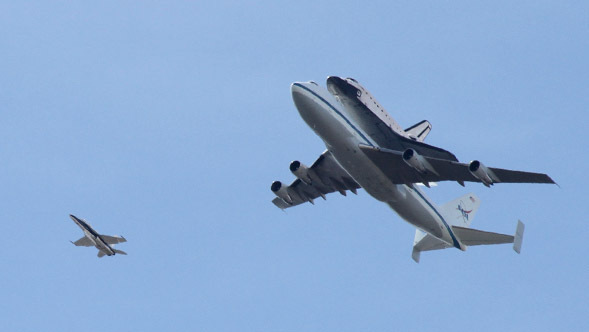