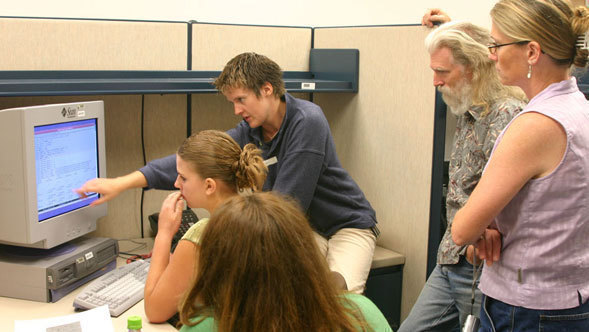 National Optical Astronomy Observatory (NOAO) scientist Dr. Steve Howell once likened a low mass star in a cataclysmic variable (CV) binary system to an aggrieved partner in a romantic relationship, that will "give, and give, and give some more until it has nothing left to give." In a CV system, the relationship taker is a dead star or, "white dwarf" (WD) which releases energy and light as it wraps itself in its partner's mass and forms a disk of material also known as an accretion disk.

Until now astronomers have only speculated about the ultimate fate of the companion stars in CV systems with relatively short (75 to 90 minute) orbits. Howell and Spitzer research scientist Dr. Donald Hoard have debated whether they will ultimately become very small M- or L-type stars with about 10 percent of the Sun's mass, brown dwarfs, or perhaps a completely new type of star with unforeseen properties. Using Spitzer's Infrared Array Camera (IRAC), two teens from Great Falls, Mont., their former science teacher, and a high school physics teacher from East Cranston, R.I., have taken pictures of short-orbit CVs in four different infrared wavelengths and will attempt to solve this mystery.

According to Hoard, CV systems are important because they give astronomers insight into the accretion, or "mass transfer," process that also plays a role in the formation of stars and planets.

"CV accretion is one of the simplest forms of mass transfer in the universe," said Hoard. "These systems are great to observe because unlike star and planetary accretion, CV accretion proceeds on relatively short, human timescales."

Hoard adds that the hot WD and accretion disk in a CV generates so much light that their faint, cool companion star is "lost in the glare" and cannot be detected in the ultraviolet or visible spectrum. Prior to NASA's Spitzer Space Telescope, the sensitive technology required for observing these dim objects did not exist.

According to Howell, Spitzer is ideal for studying these types of binary systems because it offers the unprecedented option of observing objects in near, mid, and far infrared wavelengths. Because the cool companion stars in CVs emit most of their light in the infrared, Spitzer is able to ignore the hot WD and disk, and isolate the light of the companion. For this project, the team of students, teachers, and scientists managed to detect short-orbit CV donor stars using mid-infrared light.

Last October, Howell was one of four astronomers who co-authored a paper on the discovery of a faint donor star in a short-orbit CV system called EF Eridanus (EF Eri), which was also one of the systems observed for this project.

Both Hoard and Howell mentored the group of researching students and teachers who visited the Spitzer Science Center (SSC) the week of July 25 as participants of the Spitzer Space Telescope Research Program for Teachers and Students.

The program granted 12 educators three and a half hours of Spitzer observing time for educational observations, and paired six student-teacher groups with mentors from Spitzer and NOAO's staff of scientists. Sponsored by the NOAO/National Science Foundation (NSF), and SSC, the program's goal is to inspire middle and high school students to pursue careers in science, technology, engineering and mathematics. This teacher-student group represents the second of six that will be visiting SSC throughout the summer to analyze data from Spitzer's educational observations.

"I think that it is wonderful that we get to be a part of this," said high school sophomore and aspiring astrophysicist, Kimmerlee Johnson. "It's exciting to know that your information will be shared with a community of astronomers."

Upon their arrival, Johnson, her classmate Michelle Smith, their former science teacher Beth Thomas, and East Cranston, R.I. physics teacher Howard Chun, had three days to learn how to process raw Spitzer data into information that could be analyzed.

"The students were brilliant, they picked up everything really quickly and by the end they were basically reducing the data by themselves, which is pretty incredible," said Brinkworth. "They exceeded my expectations."

Of all the students that Thompson could have chosen to visit SSC, she chose Johnson and Smith because of their enduring interest in astronomy. Next year, both teens will write proposals for observation time on the Coude Feed telescope in Kitt Peak, Ariz. Johnson hopes to observe eclipsing binary systems and black holes, while Smith is still deciding on a topic for her proposal.

An aspiring aerospace engineer, Smith says she first knew that she was interested in astronomy at the age of six when her grandparents bought her a book about the big bang.

"I was immediately drawn to the pictures and couldn't put it down," said Smith.

In the next few months the group will communicate via e-mail to analyze their data. They will present their findings in January 2006 at the semi-annual American Astronomical Society conference in Washington D.C.