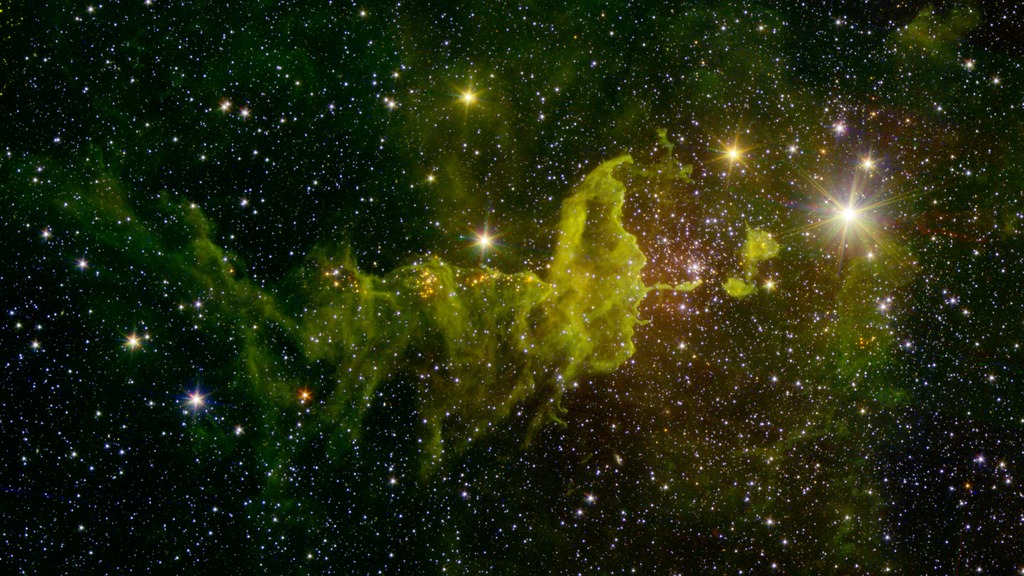 The spider part of "The Spider and the Fly" nebulae, IC 417 abounds in star formation, as seen in this infrared image from NASA's Spitzer Space Telescope and the Two Micron All Sky Survey (2MASS).

Located in the constellation Auriga, IC 417 lies about 10,000 light-years away. It is in the outer part of the Milky Way, almost exactly in the opposite direction from the galactic center. This region was chosen as the subject of a research project by a group of students, teachers and scientists as part of the NASA/IPAC Teacher Archive Research Program (NITARP) in 2015.

A cluster of young stars called "Stock 8" can be seen at center right. The light from this cluster carves out a bowl in the nearby dust clouds, seen here as green fluff. Along the sinuous tail in the center and to the left, groupings of red point sources are also young stars.

In this image, infrared wavelengths, which are invisible to the unaided eye, have been assigned visible colors. Light with a wavelength of 1.2 microns, detected by 2MASS, is shown in blue. The Spitzer wavelengths of 3.6 and 4.5 microns are green and red, respectively.

Spitzer data used to create this image were obtained during the space telescope's "warm mission" phase, following its depletion of coolant in mid-2009. Due to its design, Spitzer remains cold enough to operate efficiently at two channels of infrared light. It is now in its 12th year of operation since launch.

The 2MASS mission was a joint effort between the California Institute of Technology, Pasadena; the University of Massachusetts, Amherst; and NASA's Jet Propulsion Laboratory, Pasadena, California.

JPL manages the Spitzer Space Telescope mission for NASA's Science Mission Directorate, Washington. Science operations are conducted at the Spitzer Science Center at the California Institute of Technology in Pasadena. Spacecraft operations are based at Lockheed Martin Space Systems Company, Littleton, Colorado. Data from 2MASS and Spitzer are archived at the Infrared Science Archive housed at the Infrared Processing and Analysis Center (IPAC) at Caltech. Caltech manages JPL for NASA. 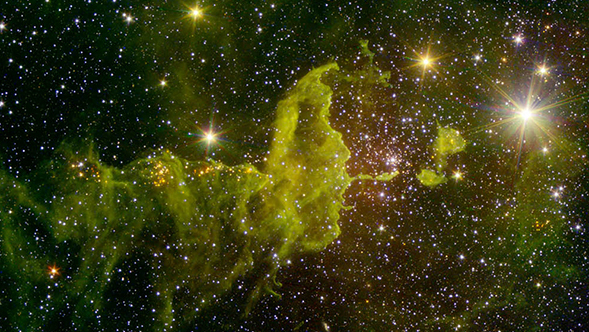 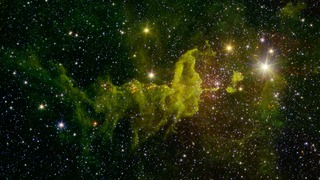