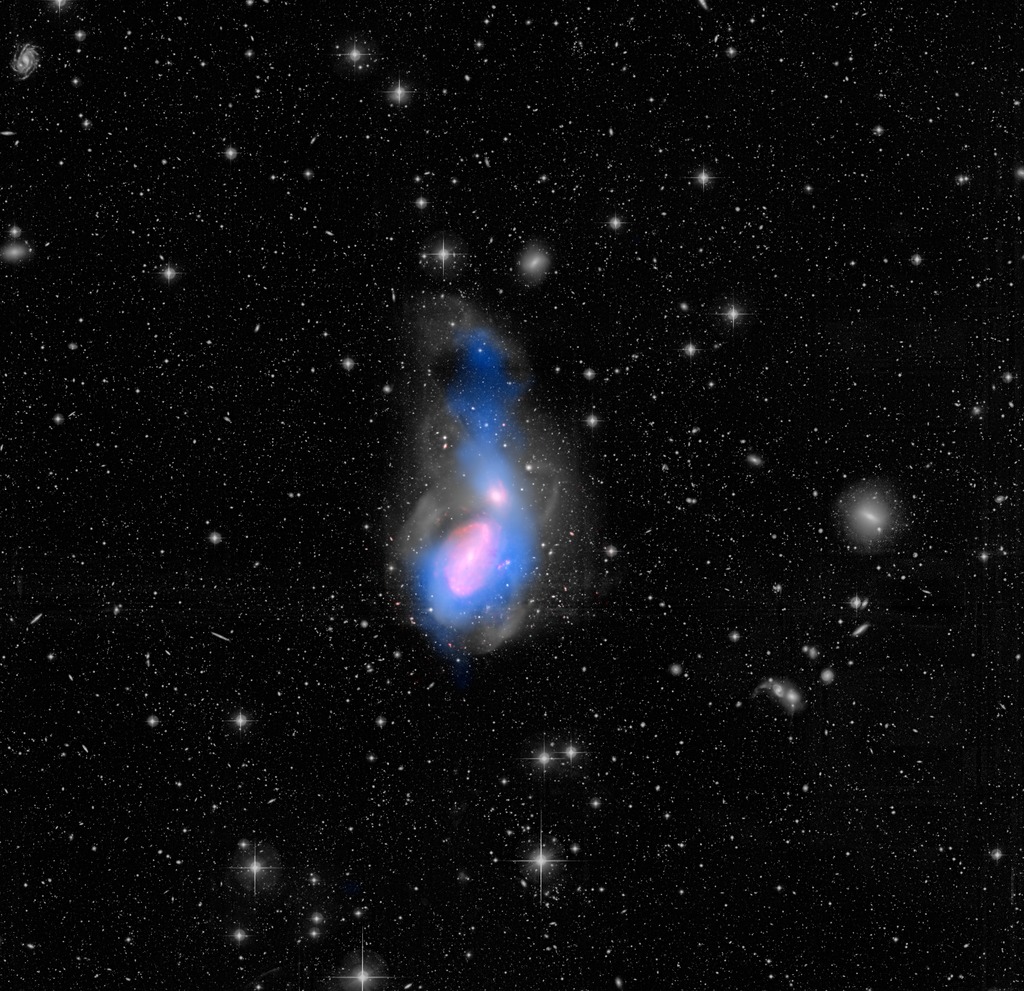 A new feature in the evolution of galaxies has been captured in this image of galactic interactions. The two galaxies seen here -- NGC 3226 at the top, NGC 3227 at the bottom -- are awash in the remains of a departed third galaxy, cannibalized by the gravity of the surviving galaxies. The surge of warm gas flowing into NGC 3226, seen as a blue filament, appears to be shutting down this galaxy's star formation, disrupting the cool gas needed to make fresh stars.

The findings come courtesy of the European Space Agency's Herschel space observatory, in which NASA played a key role, and NASA's Spitzer and Hubble space telescopes.

Adding material to galaxies often rejuvenates them, triggering new rounds of star birth as gas and dust gel together. Yet data from the three telescopes all indicate that NGC 3226 has a very low rate of star formation.

In this instance, material falling into NGC 3226 is heating up as it collides with other galactic gas and dust, quenching star formation instead of fueling it. As this warm gas chills out in the future, though, NGC 3226 should get a second wind in its stalled-out production of new stars.

The gray scale in this image shows optical starlight captured by the MegaCam instrument at the Canada France Hawaii Telescope (CFHT) telescope on Mauna Kea in Hawaii, and reveals loops of stars flung about by the galactic cannibalism. The blue color represents cool hydrogen gas seen in radio waves by the Very Large Array near Socorro, New Mexico. The big plume of gas above NGC 3226 is being drawn into the galaxy by its gravity. The red color shows infrared light emissions, captured by Spitzer, from warm gas and dust at the tip of the plume's infalling stream of material into NGC 3226, as well as from features within NGC 3227.

Other Spitzer observations reveal a disk of warm molecular gas at the core of NGC 3226, fed by the plume. Herschel observations, not shown in the image, were used to create a galactic star-formation model, which confirms NGC 3226's very low star-formation rate.

The interacting galaxies are located 49 million light-years away in the constellation Leo.

Visible starlight at wavelengths of 550 to 700 nanometers is shown in gray scale. The infrared glow of dust at 8 microns, as seen by Spitzer, is displayed in red, while the radio glow of hydrogen gas at 21 centimeters, from the VLA, is shown in blue. 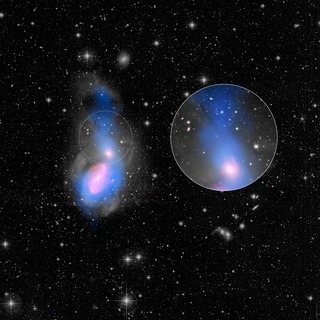 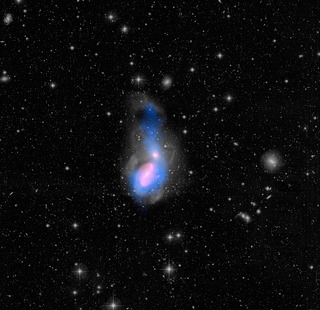