We have launched the new Spitzer website! Send feedback to outreach@ipac.caltech.edu. Find the old website at http://legacy.spitzer.caltech.edu.
NASA
Jet Propulsion Laboratory
California Institute of Technology
Two Galaxies Masquerading as One 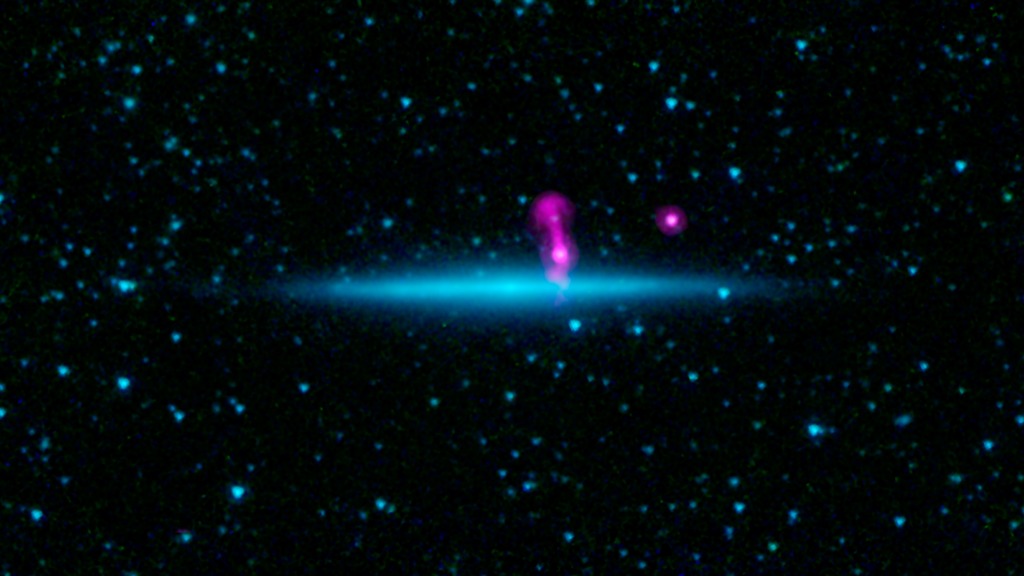 What might look like a colossal jet shooting away from a galaxy turns out to be an illusion. New data from the National Science Foundation's Karl G. Jansky Very Large Array (VLA), combined with an infrared view from NASA's Spitzer Space Telescope, reveals two galaxies, one lying behind the other, that had been masquerading as one.

In a new image highlighting the chance alignment, radio data from the VLA are magenta and infrared observations from Spitzer are blue.

The closer galaxy, called UGC 10288, is located 100 million light-years away. It is spiral in shape, but from our viewpoint on Earth, we are seeing its thin edge. Infrared observations of such edge-on galaxies penetrate the thick clouds of dust that wrap through the spiral arms and block visible light views. The bright glow of dense starfields that run along the galaxy's central plane, and in its core, are easily seen.

The farther galaxy, seen in magenta, is nearly 7 billion light-years away. Two giant jets shoot away from this galaxy, one of which is seen above the plane of the closer galaxy's disk, while the other is hidden behind it. A second distant radio galaxy can be seen as a magenta dot further to the right.

Earlier images of the two galaxies appeared as one fuzzy blob, and fooled astronomers into thinking they were looking at one galaxy. Thanks to the VLA pulling the curtain back, revealing the chance alignment, the scientists have a unique opportunity to learn otherwise-unobtainable facts about the nearer galaxy.

This image was taken after Spitzer's liquid coolant ran dry in May 2009, marking the beginning of its "warm" mission. Light from the telescope's remaining infrared channels are colored blue at 3.6 microns and green at 4.5 microns. 7.3 cm radio light from the VLA is magenta. 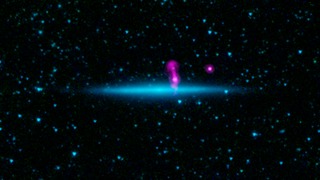 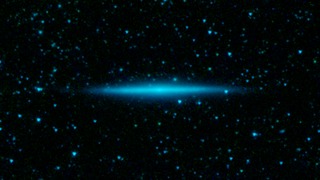