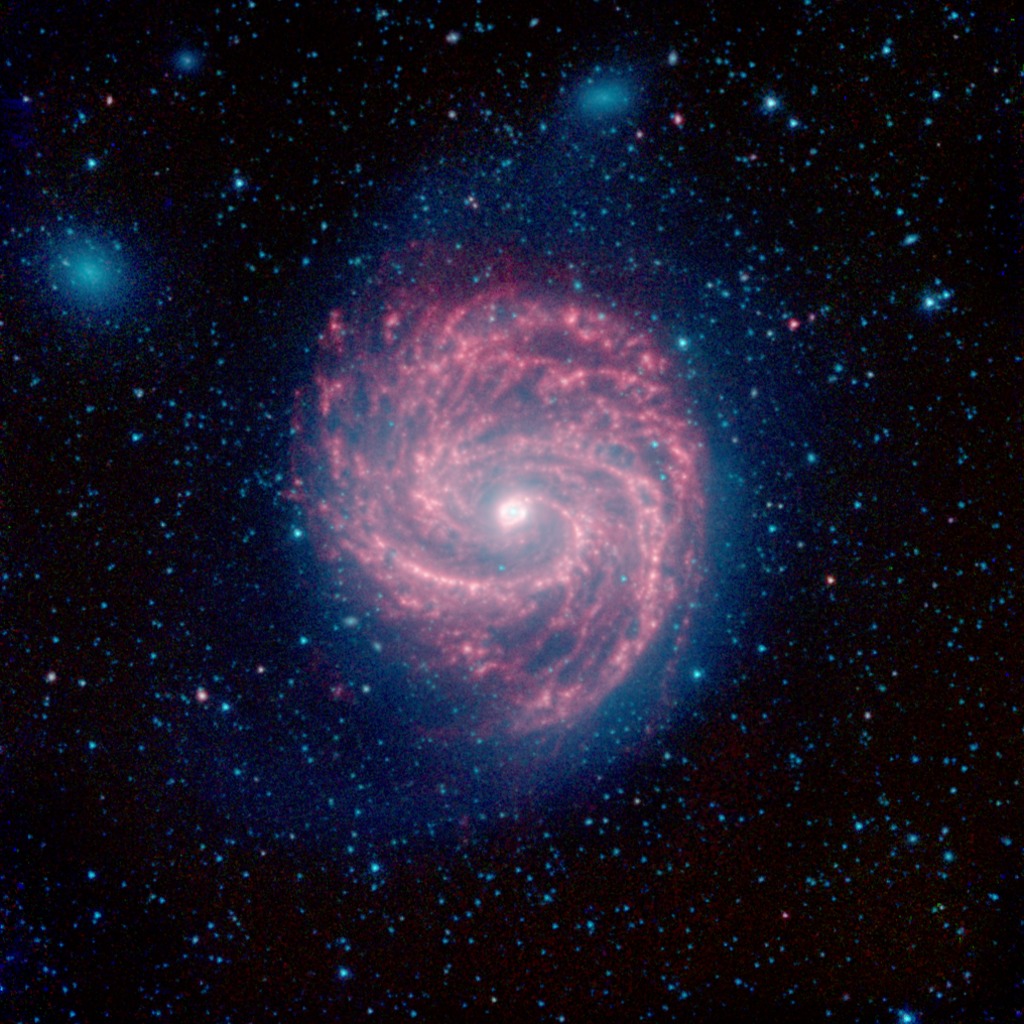 The galaxy Messier 100, or M100, shows its swirling spiral in this infrared image from NASAs Spitzer Space Telescope. The arcing spiral arms of dust and gas that harbor starforming regions glow vividly when seen in the infrared.

is a classic example of a grand design spiral galaxy, with prominent and well-defined spiral arms winding from the hot center, out to the cooler edges of the galaxy. It is located about 55 million light years away from Earth, in the little-known constellation of Coma Berenices, near to the more recognizable Leo.

In the center, we can see a prominent ring of hot, bright dust surrounding the inner galactic core. Moving further out, the spiral arms peter out towards the edges of the galaxy, where thick webs of dust dominate. Beyond the edges of the dust clouds, a faint blue glow of stars extends to the edge of the galaxys disk.

Two small companion galaxies, known as NGC 4323 and NGC 4328, appear as fuzzy blue blobs on the upper side of M100. These so-called lenticular galaxies are virtually clear of any dust, so they lack any of the red/green glow seen in their bigger neighbor. The shape of M100 is probably being perturbed by the gravity of these galaxies.

M100 was discovered in 1781, and is now known to stretch roughly 160,000 light years from one side to the other, making it about one and a half times the size of our own Milky Way galaxy. By studying these infrared images of M100, astronomers can map out the structure of the stars and dust, and study the ways in which galaxies like our Milky Way were formed.

M100 is well-known to astronomers because of the five stars that have become supernovae within the galaxy between 1901 and 2006. These exploding stars are extremely useful for helping astronomers to calibrate distance scales in the universe, and to estimate the age of the universe since its creation in the Big Bang.

The red regions reveal dust clouds that light up under the illumination of the surrounding stars. The stars themselves shine most brightly at the shorter infrared wavelengths, showing up here in blue. The blue dots covering the entire image are stars that lie between us and M100.

Infrared light with wavelengths of 3.6 and 4.5 microns are displayed in blue and green showing primarily the glow from starlight. 8 micron light is rendered in red; the small contribution from starlight at 8 microns was subtracted out from the data to better show the dust structures near the galaxys center. 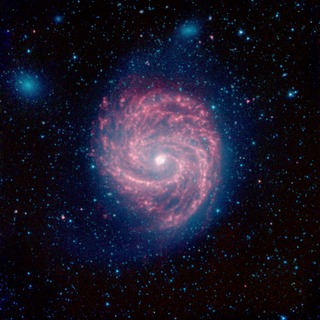 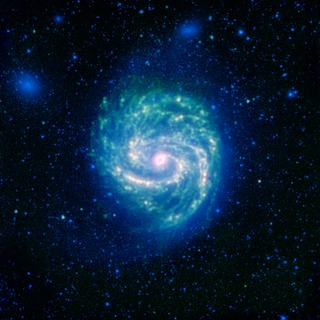