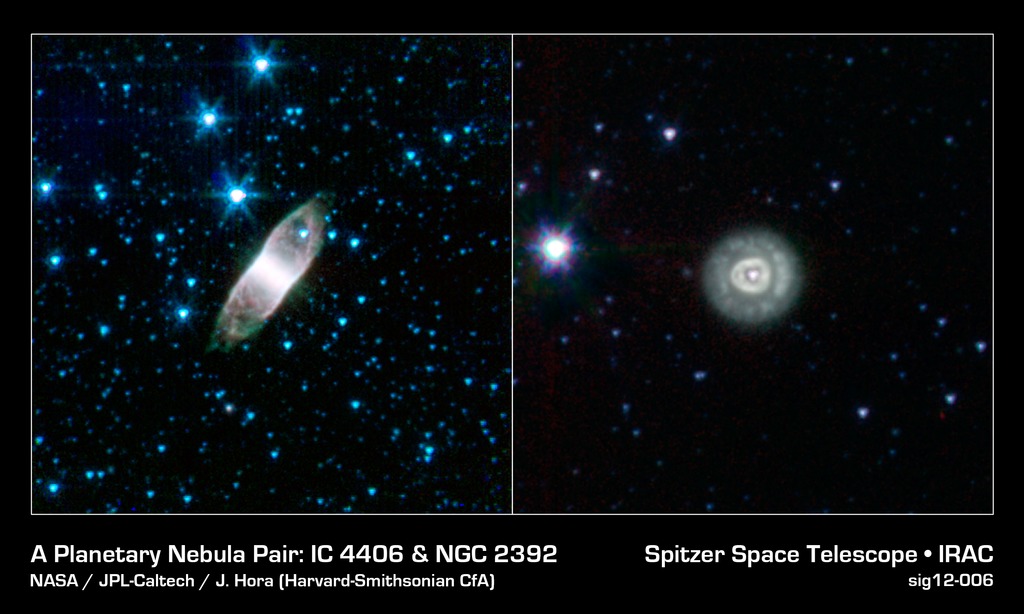 How is it that two glowing globs of gas that look completely different can actually be basically the same thing? In the case of planetary nebulae like IC 4406 and NGC 2392, all it may take is a simple shift of perspective, provided here in infrared images taken by NASA's Spitzer Space Telescope.

When stars like our sun reach the end of their nuclear fuel burning lifetimes they make one final grab for glory. The outer layers of these stars, which have swollen to something approaching the size of Earth's orbit, get blown into space forming what has been dubbed a "planetary nebula." The expelled gas from the star glows brightly, illuminated by the ultraviolet light from the surviving stellar core, known as a "white dwarf."

The two planetary nebulae pictured here look oddly different from one another. IC 4404 takes on a very boxy, rectangular form while NGC 2392 looks more like concentric circles. If they are both the last gasps of dying stars, why would they appear so strikingly different?

It appears that stars commonly eject their material in winds that mostly blow out in opposite directions from their poles. This effectively carves out a cavity in the interstellar environment that is roughly cylindrical, or rod-shaped. If you look at this cylindrical cavity from the side, you would expect to see a boxy shape like IC 4406. On the other hand, looking into this cavity from the end, like looking straight into a pipe, you would expect to see something very circular, just like NGC 2392.

So even though these two planetary nebulae do not look similar at all, they may just be showing us what a dramatic difference a little change in perspective can bring.

The boxy IC 4406 is also known as the "Retina Nebula." It is found in the constellation Lupis. Estimates of its distance are somewhat uncertain, placing it anywhere from 2,000 to 5,000 light years away from us.

The rounder NGC 2392 is in the constellation Gemini and is around 3,000 light years away. The pioneering astronomer William Herschel first discovered it in 1787.

The somewhat misleading term "planetary nebula" actually comes from Herschel himself. After observing a number of round, fuzzy objects like NGC 2392, he thought their appearance was roughly similar to the newly-discovered planet Uranus. Because of that similarity, he applied the description of "planetary" to these nebulae.

The term has stuck, even though we now know these stellar remnants have little to do with planets. The only connection is that some of the elements recirculated back into interstellar space may one day end up forming new stars and planetary systems. 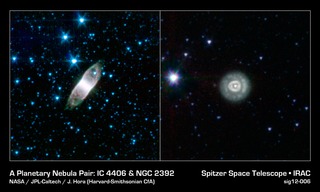 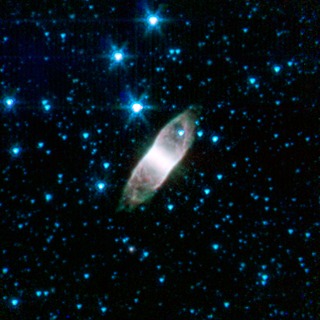 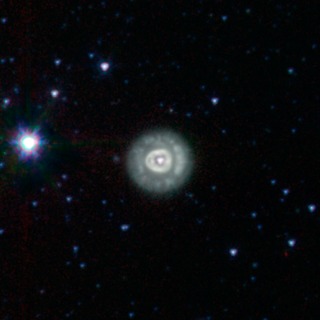