This visible-light view of the sky highlights the bright M17 nebula, as well as the glowing hot gas filling the "bubble" to its left. While young, hot stars illuminate these regions, the large dark swath to the right hides an extensive region of star formation that can only be seen outside of the visible spectrum.

Astronomers using NASA's Spitzer Space Telescope have seen, in infrared light, that this dark area is forming stars at a furious rate but has not yet spawned the most massive type of stars, known as O stars. Such stellar behemoths, however, light up the M17 nebula at the image's center and have also blown a huge "bubble" in the gas and dust that forms M17's luminous left edge.

This image is a composite of visible light data from the Digitized Sky Survey (DSS) from the UK Schmidt telescope. The image combines two observations that represent the blue and red light from the region. 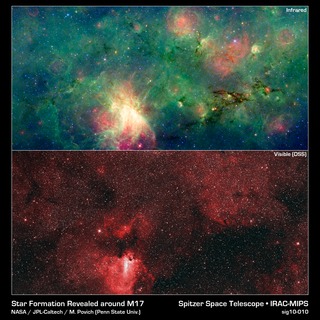