We have launched the new Spitzer website! Send feedback to outreach@ipac.caltech.edu. Find the old website at http://legacy.spitzer.caltech.edu.
NASA
Jet Propulsion Laboratory
California Institute of Technology
A GLIMPSE of the Milky Way 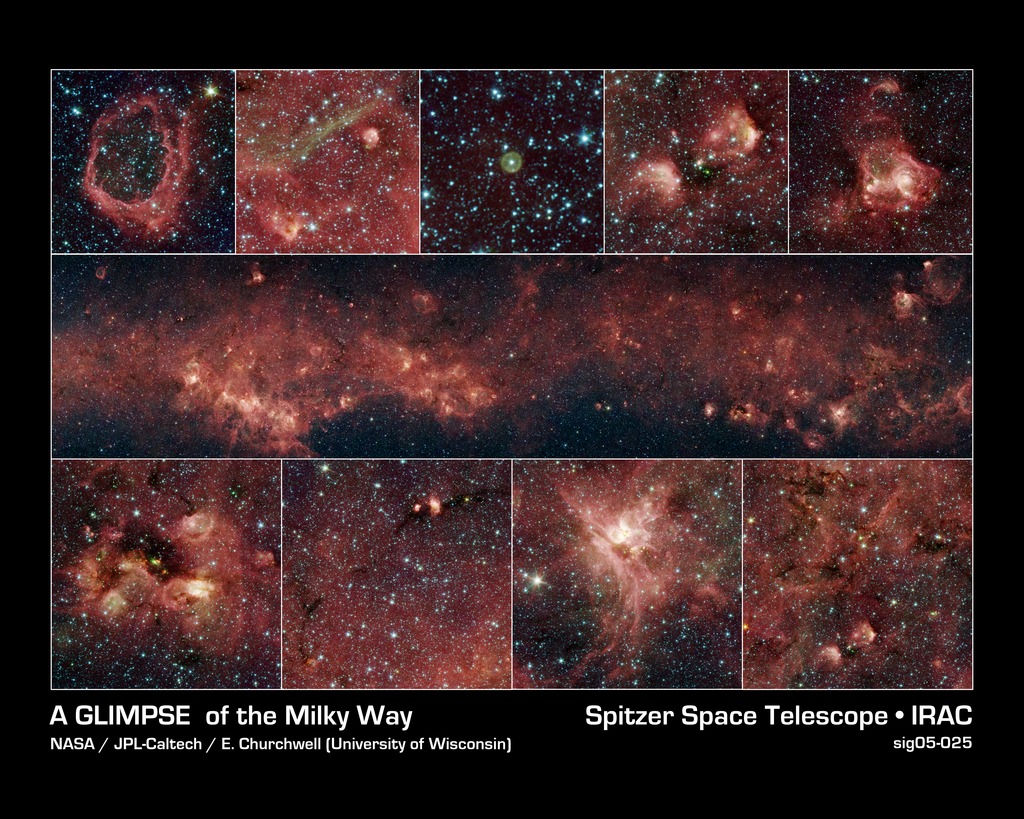 In visible light, the bulk of our Milky Way galaxy's stars are eclipsed behind thick clouds of galactic dust and gas. But to the infrared eyes of NASA's Spitzer Space Telescope, distant stars and dust clouds shine with unparalleled clarity and color.

In this panoramic image (center row) from the Galactic Legacy Infrared Mid-Plane Survey Extraordinaire (GLIMPSE) project, a plethora of stellar activity in the Milky Way's galactic plane, reaching to the far side of our galaxy, is exposed. This image spans 9 degrees of sky (approximately the width of a fist held out at arm's length).

The red clouds indicate the presence of large organic molecules (mixed with the dust), which have been illuminated by nearby star formation. The patches of black are dense obscuring dust clouds impenetrable by even Spitzer's super-sensitive infrared eyes. Bright arcs of white throughout the image are massive stellar incubators.

With over 160 megapixels, the full detail in this panorama cannot be appreciated without zooming in to various areas of interest (top and bottom rows). Bubbles, or holes, in the red clouds are formed by the powerful outflows from massive groups of forming stars. Wisps of green indicate the presence of hot hydrogen gas. Star clusters can also be seen as the groupings of blue, yellow, and green specks inside some of the red nebulae, or star-forming clouds. In contrast to the plentiful examples of stellar youth in this montage, Spitzer also sees an object called a planetary nebula (top row, middle). Such nebulae are the final gasp of dying stars like our sun, whose outer layers are blown into space, leaving a burnt -out core of a star, called a white dwarf, behind.

Although this panoramic image captures a large range of the galaxy, it represents only 7.5 percent of the primary GLIMPSE survey, which will image most of the star formation regions in our galaxy. 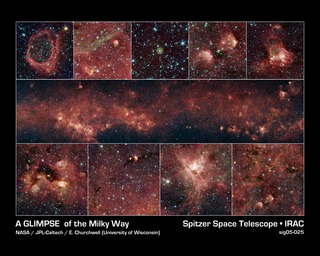 Observation | sig05-025
A GLIMPSE of the Milky Way

Observation | sig05-025a
An Infrared Slice of the Milky Way