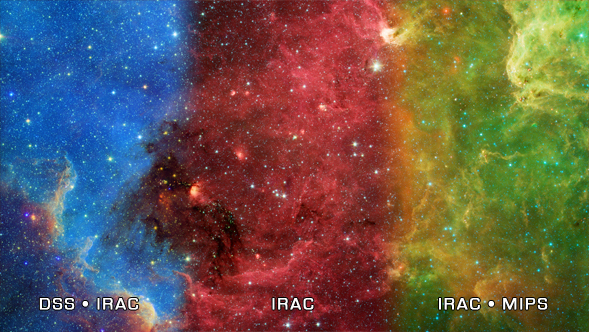 Today, we're releasing special images of the North America and Pelican Nebulae -- my data! I love these images, and not just because they're my data. This whole region is really, really cool, my team and I are finding all sorts of neat things here.

The North America and Pelican Nebulae complex (which I'm going to shorten to be "NAN" for North America Nebula) is a frequent favorite among amateur astronomers because it is a rich and interesting region in the optical, and located in Cygnus, so it's up much of the night for much of the year for observers in the Northern hemisphere. And, it is a gorgeous region, with features of both the "North America" and the "Pelican" being reasonably recognizable in the optical.

BUT, and this is, I think, the first really cool feature -- the region looks completely and utterly different when viewed with Spitzer. Look at New "View of Family Life in the North America Nebula" the comparison between the optical and IR.

I swear these are lined up appropriately. The features that are in common between the optical and the longer wavelengths are the back of the Pelican's neck and the Mexican Riviera. Everything else, basically, is totally different. You can see through things that are totally opaque in the optical, one of the main advantages of infrared data. A dramatic, huge, dense cluster of baby stars is revealed in the Gulf of Mexico (which is another 'cool feature' -- more on this below).

Let me point out that this is a HUGE image. It is about 7 square degrees. The moon is half a degree across, so this is several moons across. This is another innately 'cool feature' of Spitzer data -- you cover a lot of area very quickly and efficiently, so Spitzer maps are frequently very large.

Another 'cool feature' is that this image includes really the entire story of star formation, including the following :

The Gulf of Mexico is really the most dramatic part of this already spectacular region. I have spent hours and hours investigating this cluster already, and there are still more things to learn. There are more than 200 young stars tightly clustered along a 'river' of dark dust. The fact that this lane is dark at 24 and even 70 microns suggests that it is very dense and very cold dust, perhaps continuing to form stars. Many of the objects that have already formed are quite embedded, and some are quite warm already, suggesting that they will become very massive stars by the time they are done. There are countless jets coming off of many of them, evoking a lawn sprinkler.

As part of the Pelican nebula, there's a long "finger" of matter sticking out into the nebula. What is probably happening here is that the matter is being pushed around by all the ultraviolet (UV) light coming off of the stars powering the nebula, and the lower density matter is easier to push around. The clump at the end of the finger is denser (for whatever reason), and the matter behind it (creating the column) is "shadowed" from the UV light and thus is not blown away. The "wings" at the top of the finger used to be thought to be jets, but our observations revealed that it is more likely to be shocked matter being ablated from the denser patch at the top of the finger. There may actually be a very low mass star just beginning to form here; it is hard to tell from our observations alone, and we will have to propose to observe this region with, e.g., Herschel to further resolve this particular mystery.

North of the Pelican Nebula, there is another dark river. This would be dramatic and attention-grabbing in its own right, except for all the spectacular stuff next to it! This collection of young stars is completely new -- no one has ever noticed this before. The dark cloud here is dark at 70 microns and even at 160 microns it's relatively faint, e.g., likely to be very cold dust indeed.

Other cool things here include the following:

This region is in the Galactic plane, along a spiral arm. Thus, in addition to cluster members, we are also seeing stuff in the foreground and (LOTS of) stuff in the background. In astronomer terms, the "contamination rate" is high, e.g., there are an awful lot of things here which are NOT true members of the NAN complex. (There are more point sources here in this about 7 square degree region than in the about 44 square degree Spitzer map of the Taurus-Auriga star-forming region!) As just one example, in the "Great Lakes" region of the North America part, there is a previously-known foreground or background open cluster that is much older than the NAN. It doesn't stand out here at all because it is far too old to have many IR excesses or nebulosity left. Spitzer is key to enabling us to study this complex at all, because it is so sensitive to the IR excesses indicative of youth; this enables us to more easily pull out cluster members from the contamination.

In the literature, there are about 200 previously known young stars in this region. The Spitzer data have allowed me and my collaborators to identify 10 times as many (about 2100) young star candidates. They appear to be in at least 3 different sub-clusters within this big complex.

This large complex may actually involve not only the complicated dynamics suggested by the 24 micron emission (suggestive of large scale magnetic fields and winds), but also possibly triggered star formation, e.g., star formation in one part of the complex prompted another generation of stars in another portion.

Larger scale mysteries are here too, such as the fact that no one knows exactly what object(s) is/are powering this nebula. Looking at the total emission, there should be a small cluster of high-mass O and B stars like what is found in the Trapezium (powering the Orion Nebula Cluster), but there is no such obvious thing here. The search for the star (or star cluster) powering the nebula is ongoing; several papers in the literature assert various candidates. The Spitzer data actually don't help much with the powering star(s) either; it's possible that it is (or they are) behind the Gulf of Mexico. 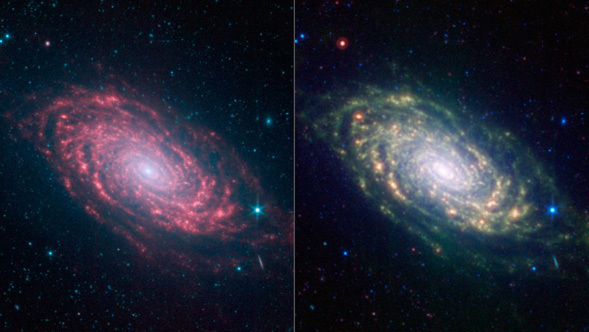 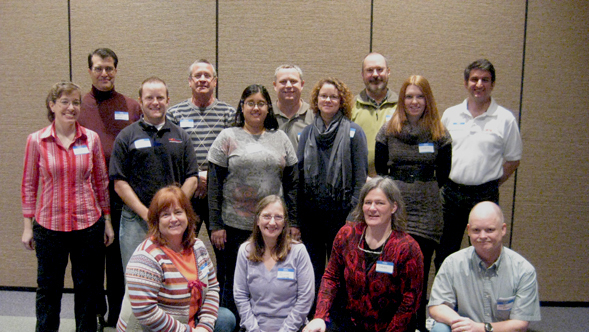