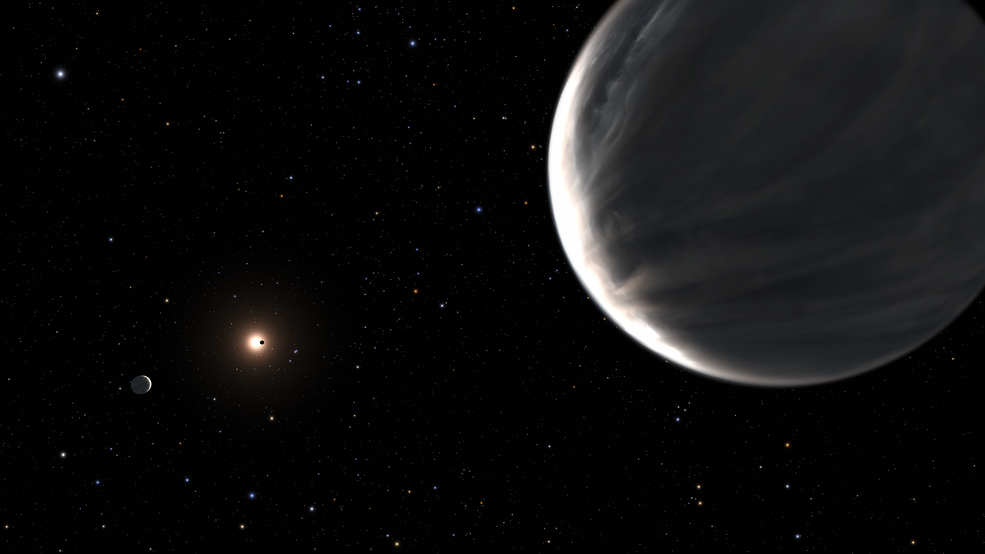 A team led by researchers at the University of Montreal has found evidence that two exoplanets orbiting a red dwarf star are "water worlds," where water makes up a large fraction of the entire planet. These worlds, located in a planetary system 218 light-years away in the constellation Lyra, are unlike any planet found in our solar system.

The team, led by Caroline Piaulet of the Trottier Institute for Research on Exoplanets at the University of Montreal, published a detailed study of this planetary system, known as Kepler-138, in the journal Nature Astronomy today. 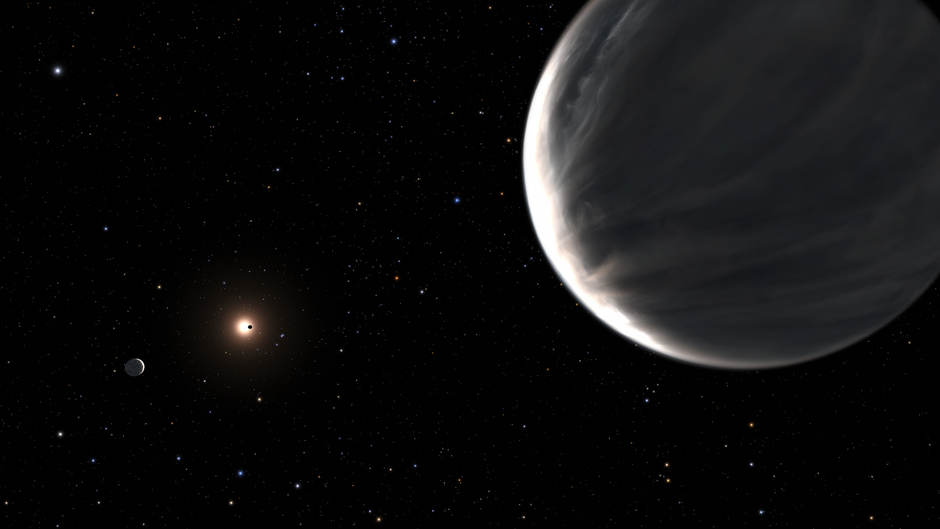 In this illustration super-Earth Kepler-138 d is in the foreground. To the left, the planet Kepler-138 c, and in the background the planet Kepler 138 b, seen in silhouette transiting its central star. Kepler 138 is a red dwarf star located 218 light-years away. The low density of Kepler-138 c and Kepler-138 d – which are nearly identical in size – means that they must be composed largely of water. They are both twice Earth's mass but have roughly half of Earth's density, and therefore cannot be solid rock. This is based on measurements of their mass versus physical diameter. They are considered a new class of "water planet," unlike any major planet found in our solar system. Kepler-138 b is one of the smallest exoplanets known, having the mass of the planet Mars and the density of rock. Credits: NASA, ESA, and Leah Hustak (STScI)

Piaulet and colleagues observed exoplanets Kepler-138 c and Kepler-138 d with NASA's Hubble and the retired Spitzer space telescopes and discovered that the planets could be composed largely of water. These two planets and a smaller planetary companion closer to the star, Kepler-138 b, had been discovered previously by NASA's Kepler Space Telescope. The new study found evidence for a fourth planet, too.

Water wasn't directly detected at Kepler-138 c and d, but by comparing the sizes and masses of the planets to models, astronomers conclude that a significant fraction of their volume – up to half of it – should be made of materials that are lighter than rock but heavier than hydrogen or helium (which constitute the bulk of gas giant planets like Jupiter). The most common of these candidate materials is water.

"We previously thought that planets that were a bit larger than Earth were big balls of metal and rock, like scaled-up versions of Earth, and that's why we called them super-Earths," explained Björn Benneke, study co-author and professor of astrophysics at the University of Montreal. "However, we have now shown that these two planets, Kepler-138 c and d, are quite different in nature and that a big fraction of their entire volume is likely composed of water. It is the best evidence yet for water worlds, a type of planet that was theorized by astronomers to exist for a long time."

With volumes more than three times that of Earth and masses twice as big, planets c and d have much lower densities than Earth. This is surprising because most of the planets just slightly bigger than Earth that have been studied in detail so far all seemed to be rocky worlds like ours. The closest comparison, say researchers, would be some of the icy moons in the outer solar system that are also largely composed of water surrounding a rocky core.

"Imagine larger versions of Europa or Enceladus, the water-rich moons orbiting Jupiter and Saturn, but brought much closer to their star," explained Piaulet. "Instead of an icy surface, they would harbor large water-vapor envelopes." 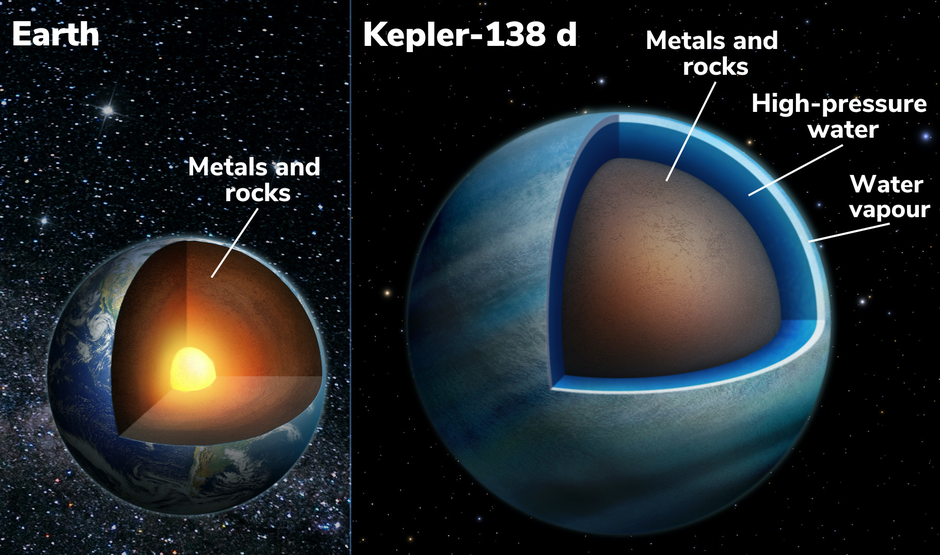 This is an artist's illustration showing a cross-section of the Earth (left) and the exoplanet Kepler-138 d (right). Like the Earth, this exoplanet has an interior composed of metals and rocks (brown portion), but Kepler-138 d also has a thick layer of high-pressure water in various forms: supercritical and potentially liquid water deep inside the planet and an extended water vapor envelope (shades of blue) above it. These water layers make up more than 50% of its volume, or a depth of about 1,243 miles (2,000 kilometers). The Earth, in comparison, has a negligible fraction of liquid water with an average ocean depth of less than 2.5 miles (4 kilometers). Credits: Benoit Gougeon (University of Montreal)

Researchers caution the planets may not have oceans like those on Earth directly at the planet's surface. "The temperature in Kepler-138 d's atmosphere is likely above the boiling point of water, and we expect a thick dense atmosphere made of steam on this planet. Only under that steam atmosphere there could potentially be liquid water at high pressure, or even water in another phase that occurs at high pressures, called a supercritical fluid," Piaulet said.

In 2014, data from NASA's Kepler Space Telescope allowed astronomers to announce the detection of three planets orbiting Kepler-138. This was based on a measurable dip in starlight as the planet momentarily passed in front of their star.

Benneke and his colleague Diana Dragomir, from the University of New Mexico, came up with the idea of re-observing the planetary system with the Hubble and Spitzer space telescopes between 2014 and 2016 to catch more transits of Kepler-138 d, the third planet in the system, in order to study its atmosphere.

A new exoplanet in the system

This newly found planet is small and farther from its star than the three others, taking 38 days to complete an orbit. The nature of this additional planet, however, remains an open question because it does not seem to transit its host star. Observing the exoplanet's transit would have allowed astronomers to determine its size.

With Kepler-138 e now in the picture, the masses of the previously known planets were measured again via the transit timing-variation method, which consists of tracking small variations in the precise moments of the planets' transits in front of their star caused by the gravitational pull of other nearby planets.

The researchers had another surprise: they found that the two water worlds Kepler-138 c and d are "twin" planets, with virtually the same size and mass, while they were previously thought to be drastically different. The closer-in planet, Kepler-138 b, on the other hand, is confirmed to be a small Mars-mass planet, one of the smallest exoplanets known to date.

"As our instruments and techniques become sensitive enough to find and study planets that are farther from their stars, we might start finding a lot more of these water worlds," Benneke concluded.

The Hubble Space Telescope is a project of international cooperation between NASA and ESA. NASA's Goddard Space Flight Center in Greenbelt, Maryland, manages the telescope. The Space Telescope Science Institute (STScI) in Baltimore, Maryland, conducts Hubble science operations. STScI is operated for NASA by the Association of Universities for Research in Astronomy, in Washington, D.C.