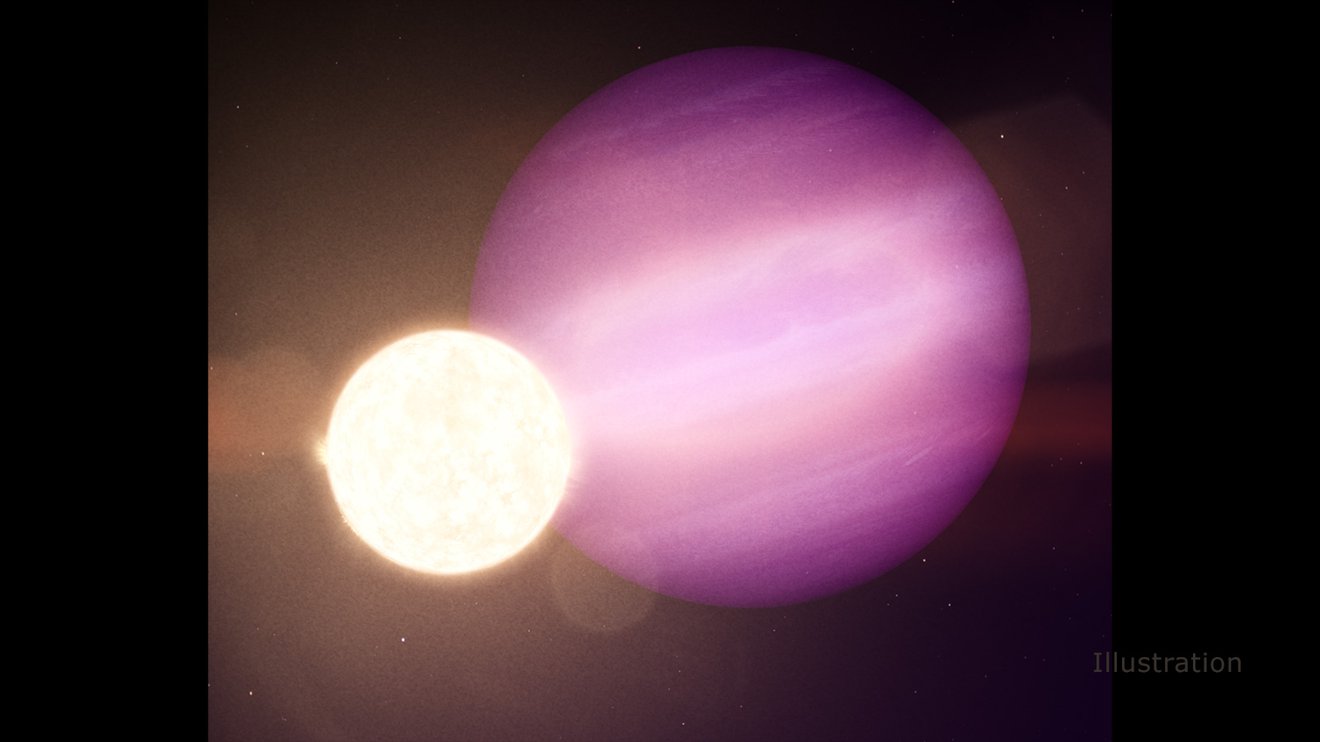 How could a giant planet have survived the violent process that transformed its parent star into a white dwarf? Astronomers have a few ideas, after discovering the Jupiter-size object WD 1856 b. Credit: NASA/JPL-Caltech/NASA's Goddard Space Flight Center

An international team of astronomers using NASA's Transiting Exoplanet Survey Satellite (TESS) and retired Spitzer Space Telescope has reported what may be the first intact planet found closely orbiting a white dwarf, the dense leftover of a Sun-like star, only 40% larger than Earth.

The Jupiter-size object, called WD 1856 b, is about seven times larger than the white dwarf, named WD 1856+534. It circles this stellar cinder every 34 hours, more than 60 times faster than Mercury orbits our Sun.

"WD 1856 b somehow got very close to its white dwarf and managed to stay in one piece," said Andrew Vanderburg, an assistant professor of astronomy at the University of Wisconsin-Madison. "The white dwarf creation process destroys nearby planets, and anything that later gets too close is usually torn apart by the star's immense gravity. We still have many questions about how WD 1856 b arrived at its current location without meeting one of those fates."

A paper about the system, led by Vanderburg and including several NASA co-authors, appears in the Sept. 17 issue of Nature and is now available online.

TESS monitors large swaths of the sky, called sectors, for nearly a month at a time. This long gaze allows the satellite to find exoplanets, or worlds beyond our solar system, by capturing changes in stellar brightness caused when a planet crosses in front of, or transits, its star.

The satellite spotted WD 1856 b about 80 light-years away in the northern constellation Draco. It orbits a cool, quiet white dwarf that is roughly 11,000 miles (18,000 kilometers) across, may be up to 10 billion years old, and is a distant member of a triple star system.

When a Sun-like star runs out of fuel, it swells up to hundreds to thousands of times its original size, forming a cooler red giant star. Eventually, itejects its outer layers of gas, losing up to 80% of its mass. The remaining hot core becomes a white dwarf. Any nearby objects are typically engulfed and incinerated during this process, which in this system would have included WD 1856 b in its current orbit. Vanderburg and his colleagues estimate the possible planet must have originated at least 50 times farther away from its present location.

"We've known for a long time that after white dwarfs are born, distant small objects such as asteroids and comets can scatter inward towards these stars. They're usually pulled apart by a white dwarf's strong gravity and turn into a debris disk," said co-author Siyi Xu, an assistant astronomer at the international Gemini Observatory in Hilo, Hawaii, which is a program of the National Science Foundation's NOIRLab. "That's why I was so excited when Andrew told me about this system. We've seen hints that planets could scatter inward, too, but this appears to be the first time we've seen a planet that made the whole journey intact."

The team suggests several scenarios that could have nudged WD 1856 b onto an elliptical path around the white dwarf. This trajectory would have become more circular over time as the star's gravity stretched the object, creating enormous tides that dissipated its orbital energy.

"The most likely case involves several other Jupiter-size bodies close to WD 1856 b's original orbit," said co-author Juliette Becker, a 51 Pegasi b Fellow in planetary science at Caltech in Pasadena. "The gravitational influence of objects that big could easily allow for the instability you'd need to knock a planet inward. But at this point, we still have more theories than data points."

Other possible scenarios involve the gradual gravitational tug of the two other stars in the system, red dwarfs G229-20 A and B, over billions of years and a flyby from a rogue star perturbing the system. Vanderburg's team thinks these and other explanations are less likely because they require finely tuned conditions to achieve the same effects as the potential giant companion planets.

Jupiter-size objects can occupy a huge range of masses, however, from planets only a few times more massive than Earth to low-mass stars thousands of times Earth's mass. Others are brown dwarfs, which straddle the line between planet and star. Usually scientists turn to radial velocity observations to measure an object's mass, which can hint at its composition and nature. This method works by studying how an orbiting object tugs on its star and alters the color of its light. But in this case, the white dwarf is so old that its light has become both too faint and too featureless for scientists to detect noticeable changes.

Instead, the team observed the system in the infrared using Spitzer, just a few months before the telescope was decommissioned. If WD 1856 b was a brown dwarf or low-mass star, it would emit its own infrared glow. This means Spitzer would record a brighter transit than it would if the object were a planet, which would block rather than emit light. When the researchers compared the Spitzer data to visible light transit observations taken with the Gran Telescopio Canarias in Spain's Canary Islands, they saw no discernable difference. That, combined with the age of the star and other information about the system, led them to conclude that WD 1856 b is most likely a planet no more than 14 times Jupiter's size. Future research and observations may be able to confirm this conclusion.

Finding a possible world closely orbiting a white dwarf prompted co-author Lisa Kaltenegger, Vanderburg, and others to consider the implications for studying atmospheres of small rocky worlds in similar situations. For example, suppose that an Earth-size planet was located the range of orbital distances around WD 1856 where water could exist on its surface. Using simulated observations, the researchers show that NASA's upcoming James Webb Space Telescope could detect water and carbon dioxide on the hypothetical world by observing just five transits.

The results of these calculations, led by Kaltenegger and Ryan MacDonald, both at Cornell University in Ithaca, New York, have been published in The Astrophysical Journal Letters and are available online.

"Even more impressively, Webb could detect gas combinations potentially indicating biological activity on such a world in as few as 25 transits," said Kaltenegger, the director of Cornell's Carl Sagan Institute. "WD 1856 b suggests planets may survive white dwarfs' chaotic histories. In the right conditions, those worlds could maintain conditions favorable for life longer than the time scale predicted for Earth. Now we can explore many new intriguing possibilities for worlds orbiting these dead stellar cores."

There is currently no evidence suggesting there are other worlds in the system, but it's possible additional planets exist and haven't been detected yet. They could have orbits that exceed the time TESS observes a sector or are tipped in a way such that transits don't occur. The white dwarf is also so small that the possibility of catching transits from planets farther out in the system is very low.

TESS is a NASA Astrophysics Explorer mission led and operated by MIT in Cambridge, Massachusetts, and managed by NASA's Goddard Space Flight Center in Greenbelt, Maryland. Additional partners include Northrop Grumman, based in Falls Church, Virginia, NASA's Ames Research Center in California's Silicon Valley, the Harvard-Smithsonian Center for Astrophysics in Cambridge, Massachusetts, MIT's Lincoln Laboratory, and the Space Telescope Science Institute in Baltimore. More than a dozen universities, research institutes, and observatories worldwide are participants in the mission.

NASA's Jet Propulsion Laboratory in Southern California managed the Spitzer mission for the agency's Science Mission Directorate in Washington. Spitzer science data continue to be analyzed by the science community via the Spitzer data archive, located at the Infrared Science Archive housed at the Infrared Processing and Analysis Center (IPAC) at Caltech. Science operations were conducted at the Spitzer Science Center at Caltech. Spacecraft operations were based at Lockheed Martin Space in Littleton, Colorado. Caltech manages JPL for NASA.

For more information on TESS, visit:

For more information on Spitzer, visit: