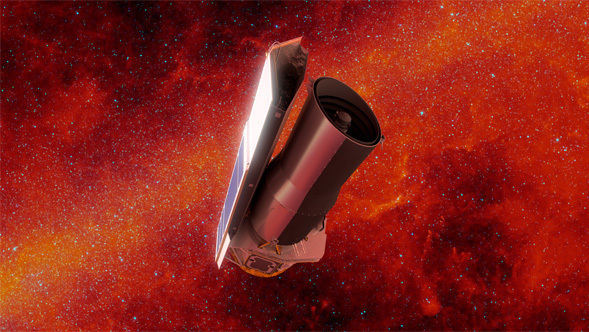 NASA is celebrating the legacy of one of its Great Observatories, the Spitzer Space Telescope, which has studied the universe in infrared light for more than 16 years. The Spitzer mission will come to a close on Jan. 30.

Launched in 2003, Spitzer revealed previously hidden features of known cosmic objects and led to discoveries and insights spanning from our own solar system to nearly the edge of the universe.

"Spitzer taught us how important infrared light is to understanding our universe, both in our own cosmic neighborhood and as far away as the most distant galaxies," said Paul Hertz, director of astrophysics at NASA Headquarters. "The advances we make across many areas in astrophysics in the future will be because of Spitzer's extraordinary legacy."

Spitzer was designed to study "the cold, the old and the dusty," three things astronomers can observe particularly well in infrared light. Infrared light refers to a range of wavelengths on the infrared spectrum, from those measuring about 700 nanometers (too small to see with the naked eye) to about 1 millimeter (about the size of the head of a pin). Different infrared wavelengths can reveal different features of the universe. For example, Spitzer can see things too cold to emit much visible light, including exoplanets (planets outside our solar system), brown dwarfs and cold matter found in the space between stars.

As for "the old," Spitzer has studied some of the most distant galaxies ever detected. The light from some of them has traveled for billions of years to reach us, enabling scientists to see those objects as they were long, long ago. In fact, working together, Spitzer and the Hubble Space Telescope (which observes primarily in visible light and at shorter infrared wavelengths than those detected by Spitzer) identified and studied the most distant galaxy observed to date. The light we see from that galaxy was emitted 13.4 billion years ago, when the universe was less than 5% of its current age.

Among other things, the two observatories found that such early galaxies are heavier than scientists expected. And by studying galaxies closer to us, Spitzer has deepened our understanding of how galaxy formation has evolved during the universe's lifetime.

Spitzer also has a keen eye for interstellar dust, which is prevalent throughout most galaxies. Mixed with gas in massive clouds, it can condense to form stars, and the remains can give birth to planets. With a technique called spectroscopy, Spitzer can analyze the chemical composition of dust to learn about the ingredients that form planets and stars.

In 2005, after NASA's Deep Impact mission intentionally slammed into Comet Tempel 1, the telescope analyzed the dust that was kicked up, providing a list of materials that would have been present in the early solar system. What's more, Spitzer found a previously undetected ring around Saturn, composed of sparse dust particles that visible-light observatories can't see.

In addition, some infrared wavelengths of light can penetrate dust when visible light cannot, allowing Spitzer to reveal regions that would otherwise remain obscured from view.

"It's quite amazing when you lay out everything that Spitzer has done in its lifetime, from detecting asteroids in our solar system no larger than a stretch limousine to learning about some of the most distant galaxies we know of," said Michael Werner, Spitzer's project scientist.

To deepen their scientific insights, Spitzer scientists have frequently combined their findings with those of many other observatories, including two of NASA's other Great Observatories, Hubble and the Chandra X-ray Observatory.

For more, check out 15 of Spitzer's Greatest Discoveries From 15 Years in Space

Some of Spitzer's greatest scientific discoveries, including those regarding exoplanets, weren't part of the mission's original science goals. The team used a technique called the transit method, which looks for a dip in a star's light that results when a planet passes in front of it, to confirm the presence of two Earth-size planets in the TRAPPIST-1 system. Then Spitzer discovered another five Earth-size planets in the same system — and provided crucial information about their densities — amounting to the largest batch of terrestrial exoplanets ever discovered around a single star.

"When Spitzer was being designed, scientists had not yet found a single transiting exoplanet, and by the time Spitzer launched, we still knew about only a handful," said Sean Carey, manager of the Spitzer Science Center at IPAC at Caltech in Pasadena, California. "The fact that Spitzer became such a powerful exoplanet tool, when that wasn't something the original planners could have possibly prepared for, is really profound. And we generated some results that absolutely knocked our socks off."

One of Spitzer's major strengths is its sensitivity — that is, its ability to detect very faint sources of infrared light. Earth is a major source of infrared radiation, and trying to see faint infrared sources from the ground is like trying to observe stars while the Sun is up. That's a major reason why Spitzer's designers made it the first astrophysics observatory in an Earth-trailing orbit: Far from our planet's heat, Spitzer's detectors wouldn't have to contend with our planet's own infrared radiation.

Spacecraft can generate infrared heat too, so Spitzer was designed to stay cool, operating at temperatures as low as minus 450 degrees Fahrenheit (minus 267 degrees Celsius). In 2009, Spitzer exhausted its supply of helium coolant, marking the end of its "cold mission." But Spitzer's great distance from Earth has helped keep it from warming up too much — it still operates at about minus 408 degrees Fahrenheit (or minus 244 degrees Celsius) — and mission team members found they could continue observing in two infrared wavelengths. Spitzer's "warm mission" has lasted for over a decade, nearly twice as long as its cold mission.

The original mission planners didn't expect Spitzer to operate for 16-plus years. This extended lifetime has led to some of Spitzer's most profound science results but has also posed challenges as the spacecraft drifts farther from Earth.

"It wasn't in the plan to have Spitzer operating so far away from Earth, so the team has had to adapt year after year to keep the spacecraft operating," said Joseph Hunt, Spitzer project manager. "But I think overcoming that challenge has given people a great sense of pride in the mission. This mission stays with you."

On Jan. 30, 2020, engineers will decommission the Spitzer spacecraft and cease science operations. During the 2016 NASA Senior Review process, the agency made a decision to close out the Spitzer mission. The closeout was initially planned for 2018 in anticipation of the launch of the James Webb Space Telescope, which will also conduct infrared astronomy. When Webb's launch was postponed, the Spitzer mission was granted its fifth and final extension. These mission extensions have given Spitzer additional time to continue producing transformative science including pathfinding work for Webb.