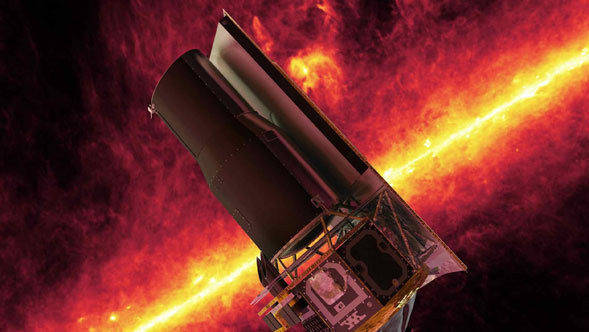 After nearly 16 years of exploring the cosmos in infrared light, NASA's Spitzer Space Telescope will be switched off permanently on Jan. 30, 2020. By then, the spacecraft will have operated for more than 11 years beyond its prime mission, thanks to the Spitzer engineering team's ability to address unique challenges as the telescope slips farther and farther from Earth.

Managed and operated by NASA's Jet Propulsion Laboratory in Pasadena, California, Spitzer is a small but transformational observatory. It captures infrared light, which is often emitted by "warm" objects that aren't quite hot enough to radiate visible light. Spitzer has lifted the veil on hidden objects in nearly every corner of the universe, from a new ring around Saturn to observations of some of the most distant galaxies known. It has spied stars in every stage of life, mapped our home galaxy, captured gorgeous images of nebulas and probed newly discovered planets orbiting distant stars.

But as Spitzer's deputy mission manager, Joseph Hunt, said, "You can have a world-class spacecraft, but it doesn't mean anything if you can't get the data back home."

Spitzer orbits the Sun on a path similar to Earth's but moves slightly slower. Today it trails about 158 million miles (254 million kilometers) behind our planet - more than 600 times the distance between Earth and the Moon. That distance, along with the curve of Spitzer's orbit, means that when the spacecraft points its fixed antenna at Earth to download data or receive commands, its solar panels tilt away from the Sun. During those periods, the spacecraft must rely on a combination of solar power and battery power to operate.

The angle at which the panels point away from the Sun has increased every year that the mission has been operating. These days, to communicate with Earth, Spitzer has to position its panels at a 53-degree angle away from the Sun (90 degrees would be fully facing away), even though the mission planners never intended for it to tilt more than 30 degrees from the Sun. Spitzer can communicate with Earth for about 2.5 hours before it has to turn its solar panels back toward the Sun to recharge its batteries. That communications window would grow shorter year after year if Spitzer continued operating, which means there is a limit to how long it would be possible to operate the spacecraft efficiently.

Teaching the spacecraft to accept new conditions - such as the increasing angle of the solar panels during communications with Earth - isn't as simple as flipping a switch. There are multiple ways these changes could trigger safety mechanisms in the spacecraft's flight software. For instance, if the panels tilted more than 30 degrees from the Sun during the mission's early years, the software would have hit "pause," putting the spacecraft into "safe mode" until the mission team could figure out what was wrong. The changing angle of Spitzer to the Sun could also trigger safety mechanisms intended to prevent spacecraft parts from overheating.

Entering safe mode can be particularly hazardous for the spacecraft, both because of its growing distance from Earth (which makes communicating more difficult) and because the aging onboard systems might not restart once they shut off.

To deal with these challenges, the project engineers and scientists at JPL and Caltech have worked with the observatory engineering team at Lockheed Martin Space's Littleton, Colorado, facility to find a path forward. (Lockheed Martin built the Spitzer spacecraft for NASA.) Bolinda Kahr, Spitzer's mission manager, leads this multi-center team. Over the years she and her colleagues have successfully figured out how to override safety mechanisms designed for the prime mission while also making sure that such alterations don't introduce other unwanted side effects.

But as Spitzer ages and gets farther from Earth, the challenge of keeping the spacecraft operating and the risk that it will suffer a major anomaly are only increasing.

"I can genuinely say that no one involved in the mission planning thought we'd be running in 2019," said Lisa Storrie-Lombardi, Spitzer's project manager. "But we have an incredibly robust spacecraft and an incredible team. And we've been lucky. You have to have some luck, because you can't anticipate everything."

Most infrared detectors have to be cooled to very low temperatures, because excess infrared light from "warm" objects - including the Sun, Earth, the spacecraft and even the instruments themselves - can overwhelm the infrared sensors. This cooling is typically done with a chemical coolant.

The Spitzer planners instead came up with a passive-cooling system that included flying the spacecraft far from Earth (a major infrared heat source). They also chose materials for the spacecraft exterior that would both reflect sunlight away before it could heat the telescope and radiate absorbed heat back into space. In this configuration, coolant is required only to lower the instrument temperatures a few degrees further. Reducing the onboard coolant supply also drastically allowed the engineers to cut the total size of the spacecraft by more than 80% and helped curtail the anticipated mission budget by more than 75%.

Although Spitzer's coolant supply ran out in 2009, rendering two of its three instruments unusable, the team was able to keep half of the remaining instrument operating. (The instrument was designed to detect four wavelengths of infrared light; in the "warm" mode, it can still detect two of them.)

Lasting more than twice as long as the primary mission, Spitzer's extended mission has yielded some of the observatory's most transformational results. In 2017, the telescope revealed the presence of seven rocky planets around the TRAPPIST-1 star. In many cases, Spitzer's exoplanet observations were combined with observations by other missions, including NASA's Kepler and Hubble space telescopes.

Spitzer's final year and a half of science operations include a number of exoplanet-related investigations. One program will investigate 15 dwarf stars (similar to the TRAPPIST-1 star) likely to host exoplanets. An additional 650 hours are dedicated to follow-up observations of planets discovered by NASA's Transiting Exoplanet Survey Satellite (TESS), which launched just over a year ago.

Every mission must end at some point. As the challenges associated with operating Spitzer continue to grow and as the risk of a mission-ending anomaly on the spacecraft rises, NASA has made the decision to close out the mission in a controlled manner.

"There have been times when the Spitzer mission could have ended in a way we didn't plan for," said Kahr. "I'm glad that in January we'll be able to retire the spacecraft deliberately, the way we want to do it."

While Spitzer's mission is ending, it has helped set the stage for NASA's James Webb Space Telescope, set to launch in 2021, which will study the universe in many of the same wavelengths observed by Spitzer. Webb's primary mirror is about 7.5 times larger than Spitzer's mirror, meaning Webb will be able to study many of the same targets in much higher resolution and objects much farther away from Earth than what Spitzer can observe.

Thirteen science programs have already been selected for Webb's first five months of operations, four of which build directly on Spitzer observations. Webb will greatly expand on the legacy begun by Spitzer and answer questions that Spitzer has only begun to investigate.