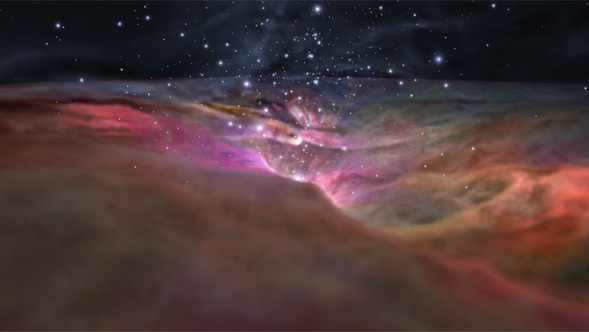 Astronomers and visualization specialists from NASA's Universe of Learning program have combined visible and infrared vision of the Hubble and Spitzer space telescopes to create an unprecedented, three-dimensional, fly-through view of the picturesque Orion Nebula, a nearby star-forming region.

Viewers experience this nearby stellar nursery "up close and personal" as the new digital visualization ferries them among newborn stars, glowing clouds heated by intense radiation, and tadpole-shaped gaseous envelopes surrounding protoplanetary disks.

Using actual scientific imagery and other data, combined with Hollywood techniques, a team at the Space Telescope Science Institute in Baltimore, and the Caltech/Infrared Processing and Analysis Center (IPAC) in Pasadena, California, has created the best and most detailed multi-wavelength visualization yet of this photogenic nebula. The fly-through enables people to experience and learn about the universe in an exciting new way.

The three-minute movie, which shows the Orion Nebula in both visible and infrared light, was released to the public today. It is available to planetariums and other centers of informal learning worldwide to help audiences explore fundamental questions in science such as, "How did we get here?"

This visualization explores the Orion Nebula using both visible and infrared light. The sequence begins with a wide-field view of the sky showing the plane of our Milky Way Galaxy, then zooms down to the scale of the Orion Nebula. The visible light observation (from the Hubble Space Telescope) and the infrared light observation (from the Spitzer Space Telescope) are compared first in two-dimensional images, and then in three-dimensional models.

"Being able to fly through the nebula's tapestry in three dimensions gives people a much better sense of what the universe is really like," explained the Space Telescope Science Institute's visualization scientist Frank Summers, who led the team that developed the movie. "By adding depth and structure to the amazing images, this fly-through helps elucidate the universe for the public, both educating and inspiring."

"Looking at the universe in infrared light gives striking context for the more familiar visible-light views. This movie provides a uniquely immersive chance to see how new features appear as we shift to wavelengths of light normally invisible to our eyes," said Robert Hurt, lead visualization scientist at IPAC.

One of the sky's brightest nebulas, the Orion Nebula, is visible to the naked eye. It appears as the middle "star" in the sword of the constellation Orion, the Hunter, and is located about 1,350 light-years away. At only 2 million years old, the nebula is an ideal laboratory for studying young stars and stars that are still forming. It offers a glimpse of what might have happened when the Sun was born 4.6 billion years ago.

The three-dimensional video provides a look at the fantastic topography of the nebula. A torrent of ultraviolet radiation and stellar winds from the massive, central stars of the Trapezium star cluster has carved out a cavernous bowl-like cavity in the wall of a giant cloud of cold molecular hydrogen laced with dust.

Astronomers and visualizers worked together to make a three-dimensional model of the depths of this cavernous region, like plotting mountains and valleys on the ocean floor. Colorful Hubble and Spitzer images were then overlaid on the terrain.

The scientific visualization takes the viewer on a breathtaking flight through the nebula, following the contours of the gas and dust. By toggling between the Hubble and Spitzer views, the movie shows strikingly different details of the Orion Nebula.

Hubble sees objects that glow in visible light, which are typically in the thousands of degrees. Spitzer is sensitive to cooler objects with temperatures of just hundreds of degrees. Spitzer's infrared vision pierces through obscuring dust to see stars embedded deep into the nebula, as well as fainter and less massive stars, which are brighter in infrared than in visible light. The new visualization helps people experience how the two telescopes provide a more complex and complete picture of the nebula.

The visualization is one of a new generation of products and experiences being developed by NASA's Universe of Learning program. The effort combines a direct connection to the science and scientists of NASA's astrophysics missions with attention to audience needs to enable youth, families and lifelong learners to explore fundamental questions in science, experience how science is done, and discover the universe for themselves.

The three-dimensional interpretation is guided by scientific knowledge and scientific intuition. Starting with the two-dimensional Hubble and Spitzer images, Summers and Hurt worked with experts to analyze the structure inside the nebula. They first created a visible-light surface, and then an underlying structure of the infrared features.

To give the nebula its ethereal feel, Summers wrote a special rendering code for efficiently combining the tens of millions of semi-transparent elements of the gas. The customized code allows Summers to run this and other visualizations on desktop workstations, rather than on a supercomputing cluster.

The other components of the nebula were isolated into image layers and modeled separately. These elements included stars, protoplanetary disks, bow shocks, and the thin gas in front of the nebula called "the veil." After rendering, these layers and the gaseous nebula are brought back together to create the visualization.

The three-dimensional structures serve as scientifically reasonable approximations for imagining the nebula. "The main thing is to give the viewer an experiential understanding, so that they have a way to interpret the images from telescopes," explained Summers. "It's a really wonderful thing when they can build a mental model in their head to transform the two-dimensional image into a three-dimensional scene."

This movie demonstrates the power of multi-wavelength astronomy. It helps audiences understand how science is done -- how and why astronomers use multiple regions of the electromagnetic spectrum to explore and learn about our universe. It is also whetting astronomers' appetites for what they will see with NASA's James Webb Space Telescope, which will show much finer details of the deeper, infrared features.

More visualizations and connections between the science of nebulas and learners can be explored through other products produced by NASA's Universe of Learning, such as ViewSpace. ViewSpace is a video exhibit currently at almost 200 museums and planetariums across the United States. Visitors can go beyond video to explore the images produced by space telescopes with interactive tools now available for museums and planetariums.