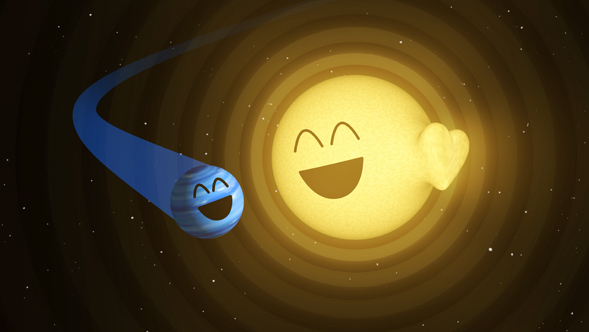 A planet and a star are having a tumultuous romance that can be detected from 370 light-years away.

NASA's Spitzer Space Telescope has detected unusual pulsations in the outer shell of a star called HAT-P-2. Scientists' best guess is that a closely orbiting planet, called HAT-P-2b, causes these vibrations each time it gets close to the star in its orbit.

"Just in time for Valentine's Day, we have discovered the first example of a planet that seems to be causing a heartbeat-like behavior in its host star," said Julien de Wit, postdoctoral associate at the Massachusetts Institute of Technology, Cambridge. A study describing the findings was published today in Astrophysical Journal Letters.

The star's pulsations are the most subtle variations of light from any source that Spitzer has ever measured. A similar effect had been observed in binary systems called "heartbeat stars" in the past, but never before between a star and a planet.

Weighing in at about eight times the mass of Jupiter, HAT-P-2b is a relatively massive planet. It's a "hot Jupiter," meaning an exoplanet that is extremely warm and orbits its star tightly. But this hot Jupiter is tiny in relation to its host star, which is about 100 times more massive. That size difference makes the pulsation effect all the more unusual (For comparison, our sun is about 1,000 times more massive than Jupiter).

"It's remarkable that this relatively small planet seems to affect the whole star in a way that we can see from far away," said Heather Knutson, assistant professor of geological and planetary sciences at Caltech in Pasadena, California.

Known to the exoplanet community since 2007, HAT-P-2b was initially interesting to astronomers because of its "eccentric," or elliptical orbit. The planet spends most of its time relatively far from the star, but comes around for a close encounter every 5.6 days. Those are indeed hot dates for this planet, as it receives as much as 10 times the amount of light per unit area at closest approach than at its farthest point in the orbit.

Each time the planet swings around for that close approach, it appears to gives its star a little "kiss" as the gravitational forces of these two bodies interact. The star, in turn, beats like a heart as the planet travels around in its orbit again. For a less lovey-dovey analogy: The planet's gravity hits the star like a bell on closest approach, making it ring throughout the planet's orbit.

"We had intended the observations to provide a detailed look at HAT-P-2b’s atmospheric circulation," said Nikole Lewis, co-author and astronomer at Space Telescope Science Institute, Baltimore. "The discovery of the oscillations was unexpected but adds another piece to the puzzle of how this system evolved."

Spitzer watched the planet-star interactions from the vantage point of our own solar system, in the telescope's Earth-trailing orbit around the sun, for about 350 hours between July 2011 and November 2015. Because of the system's alignment with respect to Earth, Spitzer was able to observe the planet cross directly in front of the star (in a process called a "transit") as well as behind it (called a "secondary eclipse"). These eclipses of the planet allowed scientists to determine that the pulsations originate from the star, not the planet. The point of closest approach occurs between the transit and secondary eclipse.

The planetary system still has scientists stumped. Calculations by co-author Jim Fuller, Caltech postdoctoral scholar, predicted that the pitter-patter of the star's vibrations should be quieter and at a lower frequency than what Spitzer found.

"Our observations suggest that our understanding of planet-star interactions is incomplete," said de Wit. "There's more to learn from studying stars in systems like this one and listening for the stories they tell through their 'heartbeats.'"