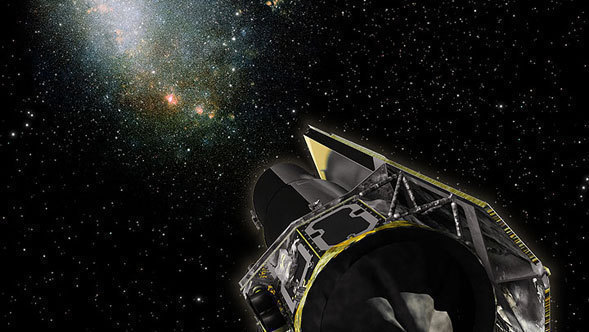 The primary mission of NASA's Spitzer Space Telescope is about to end after more than five and a half years of probing the cosmos with its keen infrared eye. Within about a week of May 12, the telescope is expected to run out of the liquid helium needed to chill some of its instruments to operating temperatures.

The end of the coolant will begin a new era for Spitzer. The telescope will start its "warm" mission with two channels of one instrument still working at full capacity. Some of the science explored by a warm Spitzer will be the same, and some will be entirely new.

"We like to think of Spitzer as being reborn," said Robert Wilson, Spitzer project manager at NASA's Jet Propulsion Laboratory, Pasadena, Calif. "Spitzer led an amazing life, performing above and beyond its call of duty. Its primary mission might be over, but it will tackle new scientific pursuits, and more breakthroughs are sure to come."

Spitzer is the last of NASA's Great Observatories, a suite of telescopes designed to see the visible and invisible colors of the universe. The suite also includes NASA's Hubble and Chandra space telescopes. Spitzer has explored, with unprecedented sensitivity, the infrared side of the cosmos, where dark, dusty and distant objects hide.

For a telescope to detect infrared light - essentially heat - from cool cosmic objects, it must have very little heat of its own. During the past five years, liquid helium has run through Spitzer's "veins," keeping its three instruments chilled to -456 degrees Fahrenheit (-271 Celsius), or less than 3 degrees above absolute zero, the coldest temperature theoretically attainable. The cryogen was projected to last as little as two and a half years, but Spitzer's efficient design and careful operations enabled it to last more than five and a half years.

Spitzer's new "warm" temperature is still quite chilly at -404 degrees Fahrenheit (-242 Celsius) - much colder than a winter day in Antarctica when temperatures sometimes reach -75 degrees Fahrenheit (-59 Celsius). This temperature rise means two of Spitzer's instruments - its longer wavelength multiband imaging photometer and its infrared spectrograph - will no longer be cold enough to detect cool objects in space.

However, the telescope's two shortest-wavelength detectors in its infrared array camera will continue to function perfectly. They will still pick up the glow from a range of objects: asteroids in our solar system, dusty stars, planet-forming disks, gas-giant planets and distant galaxies. In addition, Spitzer still will be able to see through the dust that permeates our galaxy and blocks visible-light views.

"We will do exciting and important science with these two infrared channels," said Spitzer Project Scientist Michael Werner of JPL. Werner has been working on Spitzer for more than 30 years. "Our new science program takes advantage of what these channels do best. We're focusing on aspects of the cosmos that we still have much to learn about."

Since its launch from Cape Canaveral, Fla., on Aug. 25, 2003, Spitzer has made countless breakthroughs in astronomy. Observations of comets both near and far have established that the stuff of comets and planets is similar throughout the galaxy. Breathtaking photos of dusty stellar nests have led to new insights into how stars are born. And Spitzer's eye on the very distant universe, billions of light-years away, has revealed hundreds of massive black holes lurking in the dark.

Perhaps the most revolutionary and surprising Spitzer finds involve planets around other stars, called exoplanets. Exoplanets are, in almost all cases, too close to their parent stars to be seen from our Earthly point of view. Nevertheless, planet hunters continue to uncover them by looking for changes in the parent stars. Before Spitzer, everything we knew about exoplanets came from indirect observations such as these.

In 2005, Spitzer detected the first light, or photons, from an exoplanet. In a clever technique, now referred to as the secondary-eclipse method, Spitzer was able to collect the light of a hot, gaseous exoplanet and learn about its temperature. Further detailed spectroscopic studies later revealed more about the atmospheres, or "weather," on similar planets. More recently, Spitzer witnessed changes in the weather on a wildly eccentric gas exoplanet - a storm of colossal proportions brewing up in a matter of hours before quickly settling down.

"Nobody had any idea Spitzer would be able to directly study exoplanets when we designed it," Werner said. "When astronomers planned the first observations, we had no idea if they would work. To our amazement and delight, they did."

These are a few of Spitzer's achievements during the past five and a half years. Data from the telescope are cited in more than 1,500 scientific papers. And scientists and engineers expect the rewards to keep on coming during Spitzer's golden years.

Some of Spitzer's new pursuits include refining estimates of Hubble's constant, or the rate at which our universe is stretching apart; searching for galaxies at the edge of the universe; assessing how often potentially hazardous asteroids might impact Earth by measuring the sizes of asteroids; and characterizing the atmospheres of gas-giant planets expected to be discovered soon by NASA's Kepler mission. As was true during the cold Spitzer mission, these and the other programs are selected through a competition in which scientists from around the world are invited to participate.