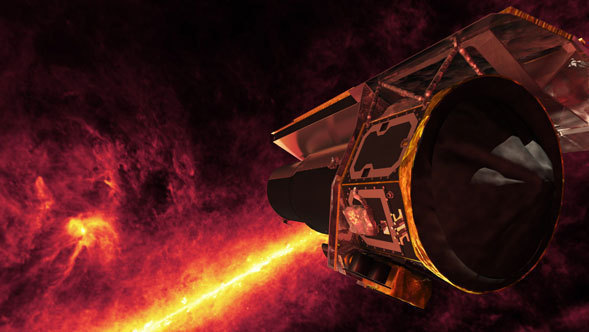 Formerly known as the Space Infrared Telescope Facility, the Spitzer Space Telescope uses state-of-the-art infrared, or "heat-sensing," detectors to peer into the farthest, darkest and coolest reaches of space. To do this, it needs to stay cool; heat emitted by the spacecraft can interfere with its infrared detectors.

Engineers and scientists at JPL and Ball, building on an idea by Spitzer team member Dr. Frank Low of the University of Arizona, Tucson, solved this cooling problem with a clever redesign of past telescopes housed in large "thermos bottles." They shrank the thermos bottle to hold only the science instruments and the coolant, and planned for the first-ever Earth-trailing orbit, which takes Spitzer farther away from Earth's warmth. This innovative "warm launch" architecture allows the chilliness of space to do most of the cooling.

Launched in August 2003, the Spitzer Space Telescope is the fourth of NASA Great Observatories, a program that also includes the Hubble Space Telescope, Chandra X-ray Observatory and Compton Gamma Ray Observatory. JPL manages the Spitzer mission for NASA's Office of Space Science, Washington. Science operations are conducted at the Spitzer Science Center at the California Institute of Technology in Pasadena. JPL is a division of Caltech.