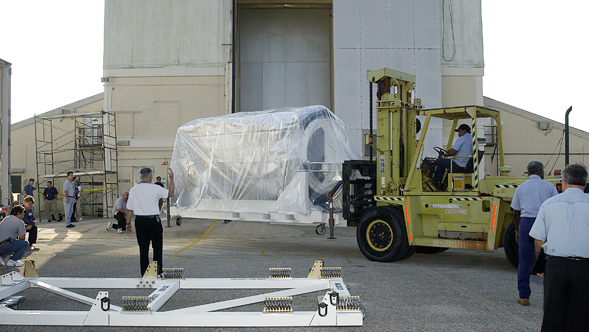 The Space Infrared Telescope Facility arrived today at the Kennedy Space Center to begin final preparations for its launch next month aboard a Boeing Delta II rocket. The observatory was shipped to Florida from the Lockheed Martin plant in Sunnyvale, Calif.

The Space Infrared Telescope Facility marks the finale of NASA's Great Observatories program, which includes the Hubble Space Telescope, the Chandra X-ray Observatory, and the Compton Gamma Ray Observatory. Its unprecedented infrared sensitivity will allow astronomers to capture what they affectionately call "the Old, the Cold, and the Dirty," referring to the coldest, oldest, and most dust-obscured objects and processes in the universe.

The observatory's amazing ability to sleuth around for low-temperature objects will also aid in the search for planetary systems in the making, some of which may breed Earth-like planets harboring life. The mission is a cornerstone of NASA's Origins Program, which seeks to answer the questions, "Where did we come from? Are we alone?"

Final launch preparations for the mission will occur in NASA spacecraft Hangar AE, a "class 10,000" laminar flow clean room on Cape Canaveral Air Force Station, where the telescope will spend approximately one month. Among the milestones that the mission must accomplish while there are a confidence test of the telescope's three instruments and the associated optics, which are part of the cryogenic telescope assembly; testing of the attitude and pointing control subsystem, which will then be filled with ultra-pure high pressure nitrogen gas; checkout of the power and communications systems; and an end-to-end communications test with the Deep Space Network of tracking stations.

After final closeouts of the observatory, the Space Infrared Telescope Facility will be mated to the payload attach fitting and transported to the launch pad.

Meanwhile, on Pad B at Launch Complex 17, the stacking of the Boeing Delta II launch vehicle began on Feb. 24 and was followed with the erection of the nine solid rocket boosters. The second stage is planned for hoisting atop the first stage on March 12. A flight simulation and a minus count with the vehicle loaded with liquid oxygen will occur the following week.

The Space Infrared Telescope Facility is scheduled to arrive at Pad 17-B on April 2 and will spend approximately two weeks atop the Delta II Heavy launch vehicle. The payload fairing will be placed around the telescope on April 5. Then the observatory's dewar will be cryogenically topped off with super-cold liquid helium to its maximum capacity -- 360 liters (90 gallons) -- chilled to near absolute zero. This is used to cool the infrared detectors so that they can achieve the highest level of sensitivity to the infrared spectrum of light. This process of filling the spacecraft dewar will take approximately six days.

Finally, two days before launch, the Delta launch vehicle's second stage will be fueled in advance for launch with its complement of storable hypergolic propellants.

Further information about the Space Infrared Telescope Facility is available at http://sirtf.caltech.edu/.