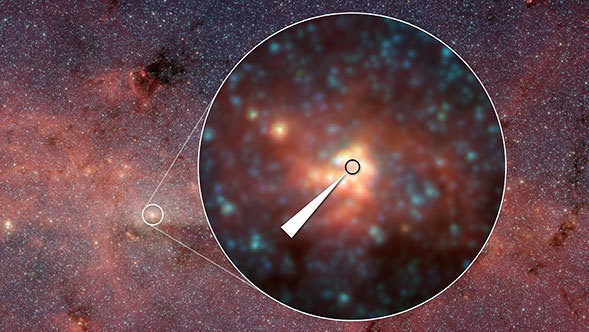 At the center of our Milky Way galaxy lies a cosmic beast called Sagittarius A*. This supermassive black hole packs about four million sun-masses into a volume roughly the size of our solar system.

Recently, NASA's Spitzer Space Telescope began exploring this exotic object. The telescope has observed a great many cosmic phenomena, from galaxy clusters to stellar nurseries during its 13-year career, but the black hole at the center of the Milky Way was never a part of the spacecraft designers' plans.

"A decade ago, no one would have taken you seriously if you had mentioned doing science like this with Spitzer," said Varoujan Gorjian, a research astronomer at NASA's Jet Propulsion Laboratory in Pasadena, California, who studies supermassive black holes. "We are very pleased that, because of its recent sensitivity boost, Spitzer can now serve as another arrow in our quiver when targeting the black hole at the heart of the Milky Way."

The sensitivity boost involves an observing mode originally intended to study exoplanets. It has given Spitzer the unexpected capability to monitor infrared flares emitted by this monster black hole, known as Sagittarius A* (pronounced "Sagittarius-A-star"). In a trial run in December 2013, Spitzer took an unprecedented 23-hour exposure. Though other telescopes have observed variability in the Sagittarius A* region, Spitzer was the first to observe it at the wavelength of 4.5 microns.

Building on that success, a fresh round of observations has just been completed, with Spitzer observing Sagittarius A* simultaneously with NASA's Chandra X-ray Observatory and the ground-based ALMA and SMA microwave observatories . Spitzer's contributions will aid ongoing efforts in understanding why the Milky Way's big black hole accretes, or gobbles up, material so calmly, compared to black holes in similar galaxies.

"We can now use Spitzer to study the emission from the innermost regions of the accretion flow onto the black hole, near the event horizon," said Joseph Hora, an astronomer at the Harvard-Smithsonian Center for Astrophysics (CfA) in Cambridge, Massachusetts, and the lead author of a 2014 study in The Astrophysical Journal reporting Spitzer's Sagittarius A* observations. The observing project was led by Giovanni Fazio, also of CfA, with collaborators including the University of California, Los Angeles (UCLA) Galactic Center group led by Andrea Ghez.

Located 26,000 light years away, Sagittarius A* is completely obscured by dust. Radio telescopes on Earth were the first to hone in on Sagittarius A* because radio waves freely pass through this dust, as well as our planet's atmosphere. Other critical insights into Sagittarius A* have since come from the Chandra telescope, which scoops up dust-penetrating X-rays in space.

The study of Sagittarius A* in infrared light has been knottier, but hugely successful. Although infrared light can also penetrate dust, only certain infrared wavelengths transmit through Earth's atmosphere. Plus, these sorts of observations must contend with infrared light emitted by both the atmosphere and telescopic equipment itself.

Despite these obstacles, starting in the mid-1990s, the 10-meter Keck Telescope in Hawaii tracked the orbits of stars (in infrared) whipping about an unseen, colossal mass emitting radio waves and X-rays at the center of our galaxy.

Ground-based observations more recently captured an outburst of infrared light from Sagittarius A* itself, presumably as it wolfed down some matter that had strayed too close. Researchers desperately want more of these sorts of observations of Sagittarius A*'s variability. Comparing these data in additional wavelengths to radio waves and X-rays will help them construct a thorough model for just how Sagittarius A* interacts with its cosmic environment.

Encouraged by the Keck results, Fazio and colleagues began considering using Spitzer's infrared camera to investigate Sagittarius A*. The odds did not look good, though. Because Spitzer's resolution cannot match that of the Keck telescope, the light from Sagittarius A* would be blended with the light of the many bright stars in the black hole's central galactic vicinity. Tracking its variability therefore seemed out of Spitzer's reach.

Fortunately, NASA engineers in the early 2010s were already seeking to increase Spitzer's stability and targeting -- essentially, its ability to pick one spot in the universe and stare at it with minimal wobbling. The intended purpose of this upgrade was to let Spitzer point fixedly at a star and watch for miniscule dimming as an exoplanet crossed, or transited. Such transits reveal an exoplanet's size, as well as clues about its atmospheric composition.

To achieve the necessary stability for exoplanet studies, Spitzer's engineers took three steps. First, in October 2010, they figured out an intermittent wobble within Spitzer stemmed from an internal heater switching on for an hour to warm a battery. The engineers managed to cut the wobble in half while preserving the battery by reducing the heater to 30-minute cycles. Next, in September 2011, the engineers repurposed a "Peak-Up" camera, used during Spitzer's early, cryogenic mission. The Peak-Up Camera can precisely place infrared light onto an exact part of a pixel in Spitzer's infrared camera. Engineers also mapped an individual pixel for its "sweet spot" that returns the most stable observations.

With these refinements in place, Spitzer could theoretically look for tiny brightness changes due to Sagittarius A* without having to isolate the object from its nearby stars. Because those neighboring stars do not vary much in brightness, any variations seen in the combined light from that region can be chalked up to activity by Sagittarius A*. Remarkably, Spitzer can detect a change of a few tenths of a percent in infrared light emanating from the Milky Way's core.

"When Sagittarius A* flares, it produces an increase in light in the infrared range. If the flare is bright enough, then Spitzer sees that as light poured on top of what's coming at the telescope already," said Gorjian.

With a view undisturbed by Earth's atmosphere and the ability to monitor Sagittarius A* for more than 20 hours straight, Spitzer is an important extension of ground-based infrared observations of the black hole.

"With Spitzer, you can monitor longer, and that's critical in determining what is causing the variability in Sagittarius A*," said Hora.

Spitzer's upcoming observations this summer in tandem with Chandra will gather infrared and X-ray emission to probe material very close to the Sagittarius A* black hole itself, helping test models of what causes the flare. It's a whole new science objective for Spitzer, which continues to surprise and delight so many years after its launch in the summer of 2003.