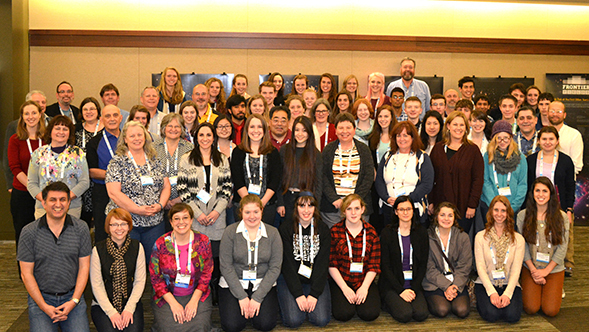 How many high school teachers and kids can say that they have presented their astronomy reach alongside professional astronomers at an international conference? These folks can.

The NASA/IPAC Teacher Archive Research Program (NITARP) is sending 40 teachers and students to the winter 2015 meeting of the American Astronomical Society, held in Seattle, WA, from 4-8 January, 2015. NITARP partners small groups of educators with a research astronomer for a year-long authentic research project. The educators and their students from the 2014 class are presenting the results of their work over the past year, and the educators from the 2015 class are meeting their teams and getting started on their projects.  Several self-funded NITARP alumni are also returning to the AAS to present work they have done after being intensively involved in the program.

As a NASA educator professional development program, NITARP has been running since 2005. A total of 93 educators from 37 states have participated or will participate in 2015. NITARP works with educators because, through them, NITARP reaches thousands of students per year with information about how science really works, what NASA does, and the wealth of astronomy data available to the public.

The teams that are presenting posters at the AAS meeting this week are:

This team used the source list from the Spitzer Enhanced Imaging Products (SEIP) to look for things with unusual colors. They have identified ~80 previously unknown sources with unusual infrared colors from the non-survey portions of the SEIP source list with the majority being extragalactic in origin.

This team used infrared data from the Wide-field Infrared Survey Explorer (WISE), combined with optical and near-infrared data from other archives and data from the literature. This team did not find what it set out to find at all! Originally, this team was looking for IR excesses around a set of relatively old stars that were thought to have possibly recently ingested a planet; others had concluded that IR excesses were a side-effect of the planet ingestion process. Instead, this team’s results in fact cast doubt on the entire model of IR excesses being a side-effect of the planet ingestion process.  This team reassessed the original objects that were the basis of the model, and found instead that few of them were likely to be stars at all.

The 2014 educators will now go on to conduct at least 12 hours of professional development for their colleagues in their schools and communities, at the local, regional, and national levels, in print and in person.

Today, NASA announces that the educators starting with the NITARP class of 2015 are:

They will present their results, with their students, at the 2016 AAS in Kissimmee, FL.

The Infrared Processing and Analysis Center (IPAC), based at Caltech, in Pasadena, CA, is leading this program. These teams use archival data from the Spitzer Space Telescope (part of the Spitzer Heritage Archive, SHA), the NASA/IPAC Extragalactic Database (NED), the NASA Exoplanet Archive, the NASA/IPAC Infrared Science Archive (IRSA), all of which are based at IPAC, and other NASA archive holdings. Funding comes from the NASA Astrophysics Data Program