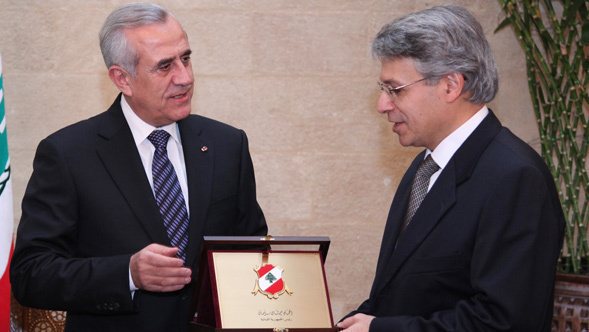 They say there is no place like home. For Caltech's George Helou, the essence of that phrase carries over to the recognition of his accomplishments. This past year, he has received numerous honors from Lebanon, his country of origin, including his election to the Lebanese Academy of Sciences. The tributes bestowed by the Mediterranean nation cite Helou's distinguished career in astronomy in the United States and Europe.

"It is gratifying to receive these accolades from my country of origin, as an indication of the value they attach to science and education," said Helou, who is the Executive Director of the Infrared Processing and Analysis Center (IPAC) and a member of the faculty in the Division of Physics, Math and Astronomy at the California Institute of Technology (Caltech) in Pasadena, Calif. He is also Deputy Director of the Spitzer Science Center and Director of the NASA Herschel Science Center.

Helou grew up in Lebanon and attended college at the American University of Beirut, before coming to the U.S. to earn his Ph.D. at Cornell University. He then became involved with the developing field of infrared astronomy, which uses non-visible light that is a bit less energetic than the light we see in order to probe the workings of stars and galaxies.

Helou was elected to the Lebanese Academy of Sciences in December 2010. That honor was followed in 2011 by a round of celebrations arranged by the non-governmental organization Diwan Ahlil Kalam (meaning the Literary Circle), a group that specializes in recognizing Lebanese émigrés who have excelled abroad.

During Helou's visit to Lebanon in November 2011, the President of the Republic of Lebanon Michel Sleiman presented him with the Coat of Arms of the Presidency, a prestigious award. A ceremony then took place at UNESCO Palace in Beirut, where some 400 attendees celebrated Helou's work with speeches and the offering of commemorative plaques.

After that, Helou visited his alma mater, the American University of Beirut, as well as Notre Dame University in Louaize and the Lebanese National Military Academy. Helou lectured and participated in Q&A sessions at these institutions and two high schools, and also appeared in over a dozen television and print media interviews.

Helou enjoyed meeting, greeting and speaking with many individuals, especially students, in Lebanon regarding his career in science. "I took this recognition as an opportunity to talk about astronomy in general, the universe and the excitement of discovery, and especially the role of infrared astronomy," Helou said.

Since the early 1980s, Helou has been involved in all of NASA's and the European Space Agency's infrared astronomy missions. These include the Infrared Astronomical Satellite (IRAS), which launched in 1983, the Infrared Space Observatory (ISO), active from 1995 to 1998, and the still-active Spitzer Space Telescope, Herschel Space Observatory, Planck Surveyor, and Wide-Field Infrared Survey Explorer (WISE).

"George Helou has contributed to every major space infrared astronomy project as a scientist and a leader," said Jean-Lou Chameau, president of Caltech. "We are proud and fortunate to have him as a member of the Caltech community."

Over his career, Helou has made several important discoveries, including the establishment of infrared "colors" of galaxies as determined by stars heating up interstellar dust. His research has helped explain the genesis of stars and the evolution of galaxies over billions of years.

"Our understanding of galaxies and how they create stars has been greatly enhanced by the research centers George leads on behalf of Caltech and NASA," added Chameau. "He is an inspiration and role model to his colleagues, and it is a privilege to be his colleague and friend."

Helou looks forward to more excitement of discovery. "These last few years, it's been the golden age of infrared astronomy worldwide, building on a rich Caltech history of pioneering work in this field," Helou said. "IPAC has been at the nexus of this golden age, capturing and archiving this scientific legacy, and is poised to participate in the next generation of projects exploring the Universe."