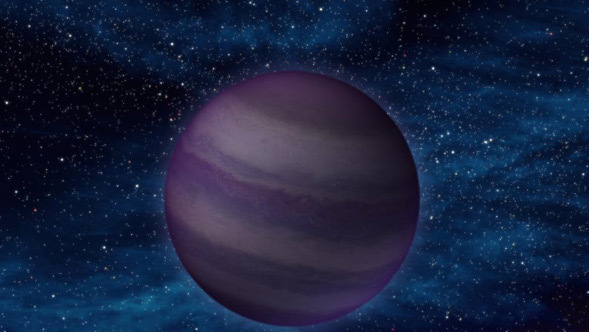 Although we all want to think that the people we keep company with are "cool," when it comes to the cosmos, no one has a cooler companion than a star known as WD 0806-661. An object spotted around this star by NASA's Spitzer Space Telescope stands as the lowest-temperature companion ever directly seen beyond the solar system.

Astronomers suspect that the object, which might be as tepid as a mild summer day, is a "failed star," or brown dwarf. The cosmic body, called WD 0806-661 B rivals other recently detected free-floating brown dwarfs as the coolest extra-solar objects known.

"We have discovered a new record holder for the coldest companion imaged outside of the solar system that is nearly as cold as Earth," said Kevin Luhman, an astronomer at The Pennsylvania State University and lead author of a pair of papers on the findings in The Astrophysical Journal. "We believe the object is a brown dwarf, but it could be a gas giant planet as well."

Based on the infrared light that it emits, WD 0806-661 B appears to have a temperature in the range of 80 and 160 degrees Fahrenheit. On the lower end, WD 0806-661 B offers a rather pleasant terrestrial temperature and is not even as warm as the human body. Researchers ballpark WD 0806-661 B's mass between six and nine Jupiters, which means it could still qualify as a planet, albeit a particularly hefty one made mostly of gas.

WD 0806-661 B orbits a white dwarf star about 63 light years away. White dwarfs are the small, burned-out cores of stars like our Sun that have exhausted their hydrogen fuel.

Although they are companions, the white dwarf and WD 0806-661 B are not (literally) close: The brown dwarf orbits the star at about 2,500 times the distance between the Earth and the Sun. Since planets do not form so far away from their host stars, such a big separation implies that WD 0806-661 B was born like a binary star, but with a mass too low for a nuclear fusion furnace to ever get going. Alternatively, if WD 0806-661 B is indeed a planet, its orbit must have expanded out to its current breadth as the planetary system evolved.

Rise of the Y Dwarfs

WD 0806-661 B probably belongs to a recently discovered new class of objects called Y dwarfs, the coldest category of brown dwarfs after toastier T and L dwarfs. Astronomers using NASA's Wide-field Infrared Survey Explorer (WISE) announced the unveiling of the first six Y dwarfs in August. Those objects do not orbit stars and instead are floating by themselves in space, unlike WD 0806-661 B.

Together, WISE and Spitzer are proving complementary in tracking down ever-cooler brown dwarfs, all the way down to the Y class. WISE covers the whole sky, casting a wide net for the lukewarm objects. "Spitzer, on the other hand, can view only small areas of sky, but can detect fainter objects than WISE, so it is better suited for finding cold companions to stars," explained Adam Burgasser, an astrophysicist at the University of California San Diego and a co-author of the Astrophysical Journal papers. Spitzer is continuing in this role even though it ran out of liquid coolant in May 2009, thus beginning its "warm" mission.

Luhman and colleagues first came upon WD 0806-661 B by noticing in Spitzer 4.5 micron observations that it moved in tandem with a white dwarf star across the sky. The researchers have since seen WD 0806-661 B in Spitzer's 3.6 micron infrared band, confirming the object's cool nature.

Indeed, the temperature of WD 0806-661 B could be low enough for the body to have water clouds in its atmosphere, like the Earth. Although WD 0806-661 B does not seem like a hospitable place for life, a visitor from our planet still might find the place agreeable. "Some of the temperatures we expect for WD 0806-661 B are broadly comparable to Earth," said Luhman. "The middle of its temperature range, about 120 degrees Fahrenheit, corresponds to a summer day in Arizona."