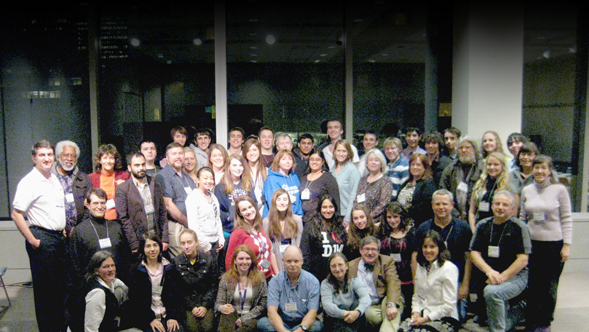 PASADENA, Calif. -- Real space science and insights into teaching astronomy come straight from the classroom to a renowned international conference this week. Nearly 60 teachers, students and astronomy educators will be on hand to present the fruits of their year-long labor as participants in NITARP, the NASA/IPAC Teacher Archive Research Program, at the winter meeting of the American Astronomical Society in Seattle, Wash. from Jan. 9 through Jan. 13, 2011.

"We're getting teachers involved in real astronomy research with real astronomical data," said Luisa Rebull, an associate research scientist from NASA's Spitzer Science Center at the California Institute of Technology, Pasadena, who coordinates the NITARP program. The goal of NITARP is to inspire and motivate students to pursue careers in science, technology, engineering and mathematics, as well as to engage the public in shaping and sharing the experience of exploration and discovery.

Last year's program turned out to be a great success as evidenced by the nine posters being presented at the winter 2011 American Astronomical Society meeting in Seattle. These posters cover topics such as the tempestuous cores of "active" galaxies to stars that periodically dim to young stars just beginning to shine.

On the educational side of things, other posters explain tools developed by teachers and students to comb large data sets and solve scientific problems. One group, for example, came up with techniques to allow vision- and hearing-impaired students to delve into astronomical science alongside their non-disabled peers.

"The class of 2010 did some amazing work and we are very proud of them," said Rebull. "We look forward to them presenting their hard-earned results to the public." All of poster titles, in the order of their appearance at the meeting, are listed below.

NITARP also recently unveiled its class of 2011. The total of 12 educators hail from all over the United States including Arizona, California, Connecticut, Florida, Illinois, Kansas, Minnesota, Oregon, Pennsylvania, Virginia, and Wisconsin. The educators and their scientific mentors are divided into three teams that will perform research and prepare posters for the 2012 American Astronomical Society winter conference.

During the spring, the teams will learn to use the appropriate scientific software for their project and will start analyzing data. Come summertime, each team (consisting of the scientist, the teachers and up to two students per teacher) will attend an all-expenses-paid workshop at the Spitzer Science Center (SSC) and the Infrared Processing and Analysis Center (IPAC), both in Pasadena, Calif. In the fall, the teams will create their poster presentation for the American Astronomical Society and the results might be published in a scientific journal as well.

In addition to classroom-experienced teachers, two teams will include non-traditional educators from the amateur astronomical community and a NASA educational outreach center. Stepping beyond the classroom will bring in fresh approaches and help spread the word to thousands in the general public. Also new for this year, in addition to Spitzer observations, one team will work with data from NASA's exoplanet-hunting Kepler spacecraft.

Applications for the 2012 NITARP class will be available in May 2011 from the NITARP website: http://coolcosmos.ipac.caltech.edu/cosmic_classroom/teacher_research/.

The NITARP posters being presented at the 217th meeting of the American Astronomical Society, Jan. 9 through Jan. 13. 2011: