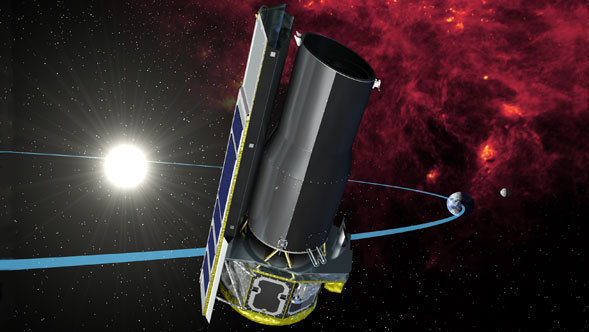 New observations of a dust cloud trailing Earth may help astronomers find Earth-like planets around distant stars. NASA's Spitzer Space Telescope mapped the structure of this dust -- sort of a dust tail behind Earth -- and measured how it interacts with our own planet. The resulting data tell astronomers what dust clouds might look around planets orbiting stars beyond our sun. Such dusty "tails" could reveal the presence of distant planets that are too small to be seen otherwise.

Since its launch in 2003, Spitzer has been drifting through a fine cloud of interplanetary dust from asteroids and comets in our solar system. These dust particles were first detected back in 1984 by the Infrared Astronomical Satellite (IRAS). The images from IRAS showed that dust is generally spread throughout the solar system, but there was an unexpected surplus of dust that seemed to follow right behind Earth in its orbit.

Astronomers eventually deduced that when a planet passes close to dust particles, they are temporarily trapped by the gravitational pull. This creates a ring of dust that runs all the way around the sun in orbit with the planet. The dust is especially dense in the region trailing the planet.

The new Spitzer observations allowed astronomer Bill Reach, formerly at NASA's Spitzer Science Center at the California Institute of Technology in Pasadena and now working on the Stratospheric Observatory for Infrared Astronomy (SOFIA) at NASA's Ames Research Center in Moffett Field, Calif., to map the structure of this ring, and measure the extent of the densest clump. In effect, this creates a huge signpost that marks the Earth, which could theoretically be seen from many millions of miles away.

Reach's work adds a vital new tool in the challenge of detecting Earth-like planets around other stars, or Earth-like exoplanets. The search for an Earth-like planet is the holy grail of planet hunters, as they are the most likely to provide a home for life. Unfortunately, these planets are very small and very dim next to their host stars, making them incredibly hard to find. Of the more than 450 exoplanets discovered so far, the vast majority have been huge gas giants like Jupiter, and not a single one of them is as small as the Earth.

This new discovery suggests that astronomers may not have to find the tiny planets themselves, but could instead look for large dusty rings around distant stars as proof that the planets are there.  "Planets create structures in the dust clouds around stars," said Reach, "Those structures could help us find or learn more about planets around stars with dust disks."

The Spitzer observations were all made before it ran out of its liquid coolant in May 2009, officially beginning its warm mission.