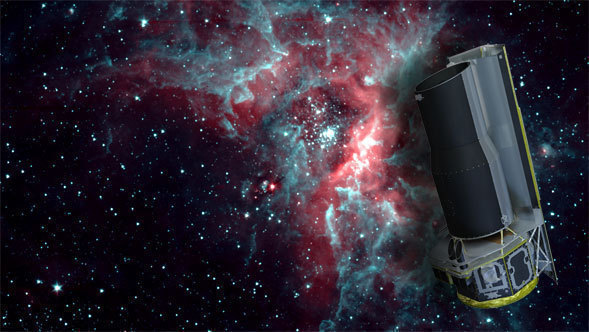 NASA's Spitzer Space Telescope team has been selected to receive the 2010 Maria and Eric Muhlmann Award from the Astronomical Society of the Pacific.

"The success of Spitzer is due to literally hundreds of people who worked on  development and operations, and I consider them all to be recipients of this award," said Dr. Michael Werner, the Spitzer project scientist who has worked on the space telescope for 33 years.

"For me and most scientists it's gratifying to be recognized by your peers. Spitzer has been a phenomenal success by all  standards: scientific, technical, and managerial."

The award is $500 in cash and a plaque to be presented at the ASP annual meeting awards banquet in August.

Werner said he plans to return the money to the ASP and "ask them to use it for education and outreach efforts because there's no possible way I could split it up among all those who have been on the Spitzer team."

The Spitzer Space Telescope is an infrared space observatory launched in 2003. It is the fourth and final of NASA's Great Observatories.

Astronomers find the infrared to be a valuable tool as it opens an important window into otherwise hidden regions of the universe. Research into the origin and composition of planets hinges on infrared observations which can reveal the character of objects within our solar system and detect the material that may be forming worlds around other stars. Likewise, in the infrared astronomers can study stars throughout their lives, from the earliest stages of formation in the hearts of dust clouds to their final years as they sputter and die. On larger scales, astronomers can use infrared observations to  probe distant galaxies individually or collectively, expanding our picture of the universe as a whole.

The planned nominal mission period was to be 2.5 years with a pre-launch expectation that the mission could extend to five or slightly more years until the onboard liquid helium supply was exhausted. This occurred in May 2009. Without liquid helium to cool the telescope to the very cold temperatures needed to operate, most instruments are no longer usable. However, the two shortest wavelength modules of the infrared camera are still operable and will continue to be used in the Spitzer Warm Mission, slated to run until the end of 2013.  During its almost 7 years of operation, Spitzer has executed about 50,000 hours of observations.  The observatory has been used by thousands of astronomers, and over 2000 papers based on Spitzer data have appeared in the scientific literature.

"Spitzer is the kind of human endeavor in which each individual who worked on it should be proud of their contributions. They should all feel like they are getting a share of this award," said Werner.