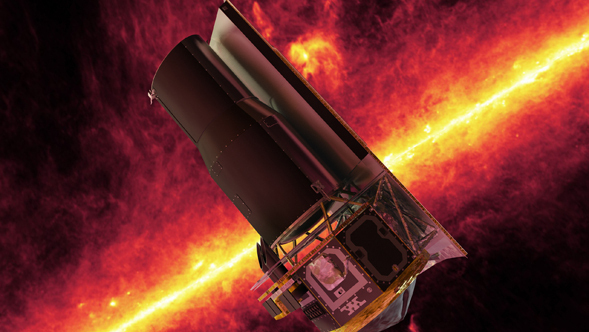 On Friday, Oct. 23, engineers with NASA's Spitzer Space Telescope successfully swapped the spacecraft from the main nitrogen thruster string to a backup thruster string. The action was taken because the performance of one of the six thrusters (thruster #6) had been degrading since May 2009, due to an electromagnetic problem with its coil. The backup thrusters were tested successfully after the swap, and there was no disruption in acquiring science data.

The nitrogen thrusters are used as required to release the solar pressure that builds momentum on the spacecraft's reaction control wheels. These wheels are used to slew and point the spacecraft toward observation targets. The process of releasing the wheel momentum is called desaturation. Since May 2009, engineers noticed that when thruster #6 was used for desaturation, the wheels were not actually being desaturated.  Only recently was the degradation becoming significant enough that the team decided action was needed.